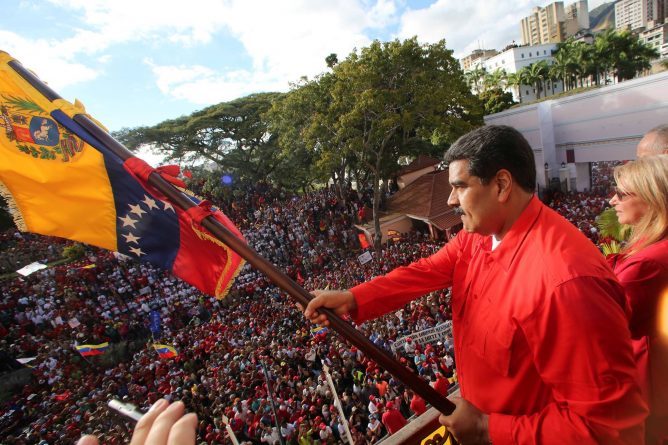 Freedom Road Socialist Organization (FRSO) condemns in the strongest possible terms the actions of the Trump administration and its allies as violations of the sovereignty of the Bolivarian Republic of Venezuela. By declaring that he will no longer recognize Nicolás Maduro as the legitimate president, and instead claiming right-wing politician Juan Guaidó is head of state, Donald Trump opens the door to a brutal Syria-style intervention in the heart of South America. It became even clearer that the United States seeks war in Venezuela when, after Maduro severed relations with the United States and demanded all of its officials leave the country, the White House announced that it had no intention of removing its diplomats.

These actions, in violation of international law and the Venezuelan Constitution, show that imperialism will go to any lengths to restore its dominance over Latin America. For over a century, the U.S. monopoly capitalist class and its governments have organized coups, fueled civil wars and supported the ruthless suppression of revolutionary and popular movements across the region. Most recently, the Trump administration supported the rise of fascist Jair Bolsonaro in Brazil and cheered on as the Colombian government betrayed its peace deal with the FARC and began murdering and imprisoning ex-combatants.

FRSO has stood against U.S. intervention around the world for decades, and in the global struggle between imperialism and oppressed nations we stand firmly on the side of the latter. We also recognize that the attacks against Venezuela contain a special character. In November, Trump’s national security advisor John Bolton stated that Bolivarian Venezuela is part of a “troika of tyranny” that is “a sordid cradle of communism in the Western Hemisphere.” Nicolás Maduro and other leaders of the Bolivarian Revolution openly declare their intention of building socialism in their nation. This, in the eyes of the White House and Wall Street, makes Venezuela an existential threat and justifies any and all measures to destroy the Bolivarian Revolution.

Freedom Road Socialist Organization stands shoulder to shoulder with the Venezuelan masses and their president Nicolás Maduro against the attacks and threats of the U.S. and its allies. We call on all progressive and popular forces in the United States to organize against the Trump government and do everything possible to prevent intervention in Venezuela.

In closing, we echo the words of Venezuela’s revolutionaries, ready if war is brought to their homeland – “Listen Yankees, we will be your Latin American Vietnam.”