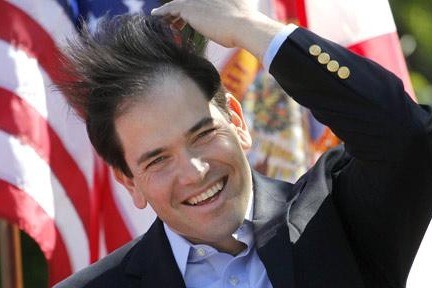 The Republican senator from Florida (USA), Marco Rubio, a fierce critic of the current Venezuelan government, has stated in his official Twitter account that “the entire security apparatus” surrounding the government of Nicolás Maduro “is directed by Cuba”, and has stated that “the nations of the Lima Group can not continue to ignore the indispensable role played by the Cuban regime in support of the Maduro regime.”

The message has generated a large number of responses, many of them openly burlesque, mainly due to the image that accompanies it: it is a photograph of a meeting of Venezuelan military officers in a room in whose entrance (barely) visible in the background is a person. In a rudimentary edition of the image, Marco Rubio circles this figure in the background of the image and points it out as “Cuban agent”.

He got immediate answers on Twitter. One of them was the writer, journalist and American blogger Max Blumenthal, who answered with an image of Marco Rubio himself submitted to equally precarious editing, in which the US senator also appeared, this time as “neoconservative puppet”.

Other users parodied the image shared by Rubio with their own ‘versions’.

Several of them resorted to universal works of art to elaborate their ingenious parodies.

Numerous tweeters also used the image of Marco Rubio to point out – always with a similar editing tool – as an “idiot agent” or “Cuban fool”.

It is not the first time that Rubio generates controversy on Twitter because of his way of expressing himself in relation to the Venezuela.

Last Sunday, after a period in which he would not stopped speculating about a military intervention in the Caribbean country, the republican senator published a tweet that many users read as a threat to President Maduro.

The message in question consisted of two photos of Muammar Gaddafi, the leader of Libya for 42 years. In one of the images the president smiles relaxed, while in the other he is seen with a bloody face, after being captured and shortly before being executed by a mob after the overthrow supported by the US. in 2011.

Entire security apparatus around the #MaduroCrimeFamily is run by #Cuba. The #LimaGroup nations can no longer ignore the indispensable role the Cuban regime plays in supporting the #MaduroRegime.

Since Cuba controls Maduro, you must start pressuring the Cuban regime. #Venezuela pic.twitter.com/kPHzKDehDC

Even among the Venezuelan opposition, some called out the tweet as “arrogant” and “counterproductive”, warning that “if Venezuela ends up like Libya, it would be an absolute defeat”, stressing that “brutal revenge” is not the way to go for the Bolivarian country.

Rubio, who is Cuban-American, is among the hardliners of the Senate and stands out as one of the instigators in the Capitol of pressure campaigns against leftist leaders in Latin America, especially in the cases of Cuba and Venezuela, but also Nicaragua and Bolivia. In 2011 Rubio himself applauded the death of Gaddafi, and even came to criticize the then US president, Barack Obama, whom he called an “enemy of the US”, for not having gone far enough in his military intervention in the North African country.