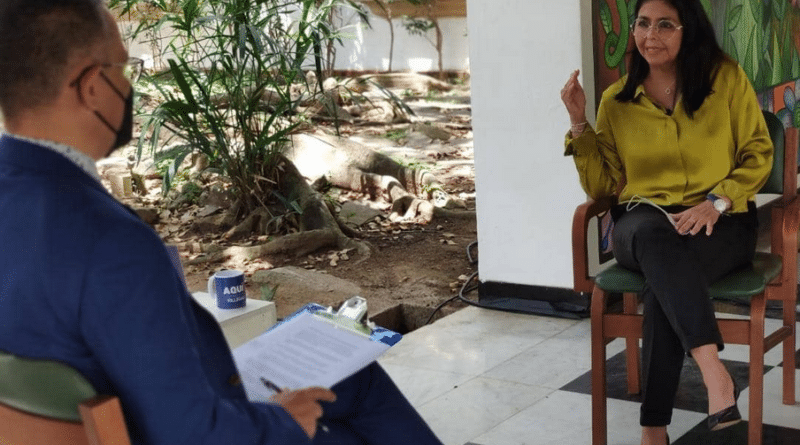 “Since 2013 the country has lost 99% of our income due to the blockade,” stressed Venezuelan Executive Vice President Delcy Rodríguez this Sunday, who affirmed that the anti-blockade law “will restore the strategic value of wages and social benefits.”

In an interview with the journalist and Minister for Culture Ernesto Villegas on his show Aqui con Ernesto, she stressed that one of the objectives is to restore the value of the population’s wages, which is explicitly referred to in “Article 18, numeral 1 of the anti-blockade law,” so that the use of resources go directly there. Rodríguez, who is also acting Minister of Economy and Finance, stressed that the law, among other things, will allow the protection of resources that enter the country, and ensure that they don’t escape to other nations, bringing with them development in those countries at the expense of ours, she specified.

“To rebuild the strategic value of wages and social benefits” the law “removes the veil of the blockade” and will open up investment on all sides with the necessary legal protection for participants, national and international businessmen, said the vice president.

In that sense, she recalled that “those who asked for sanctions against the country, will feel justice…”, she specified in reference to the resources that the nation will recapture with the activation of the anti-blockade law, recently approved by the Constituent Assembly that, according to government spokesmen, is still adjusting details for its improvement.

“The purpose of confidentiality of information” will serve to permeate and evade the blockade from Washington, said Rodríguez, when explaining the articles of law that refer to this mechanism for facing persecution by the US government of companies that decide to trade with the Venezuelan nation.

In reference to the bolivar as legal currency, she emphasized that the bolivar is embedded into “our sovereignty and its use is covered in the constitution, and therefore the protection to recover it,” clarifying that its elimination is ruled out. Particularly, she said that although other currencies circulate in the country such as dollars and euros “the use of these is not prohibited, but it is very different from dollarizing and tying our monetary policy to one dependent on the US Federal Reserve.”

RELATED CONTENT: Venezuela’s Ability to Fight COVID-19 is Badly Hamstrung by the 31 Metric Tons of Gold Stolen from its Treasury

Dialogues for peace
Vice President Rodríguez acknowledge former Spanish President José Luis Rodríguez Zapatero, who witnessed what happened in the Dominican Republic after the intense work of dialogue with the most fascist sectors of the country. “The former president said that he will write a book one day where he will reveal everything he saw there,” she said. Recall characters like Julio Borges who, minutes before signing a peace accord with Venezuelans, received a call from the White House to abandon the process.

In that sense, she indicated that one of those characters is Leopoldo López, who has not left the lobby calling for sanctions and dismemberment the Venezuelan State: “the political situation demands that leaders forge paths of peace for the nation.” As for those who took advantage of the democratic character of President Nicolás Maduro, who granted presidential pardons in order to achieve that peace, their time will come, however they are “already being punished with rejection by the people,” the first punishment, she said.

She argued that now, the way forward is to restore the stability and economic development of the people, because despite so many attacks on the bases of dialogue, “today there is peace in the country.”

Looking ahead to 6-D
She stressed that the parliamentary elections will be held to rebuild the legislative power, to reverse the suffering of the people “which will be our personal revenge,” and that revolutionary forces will once again play a leading role.

“Always standing firm, with compassion and protection for everyone, and continuing in the struggle”, she concluded.