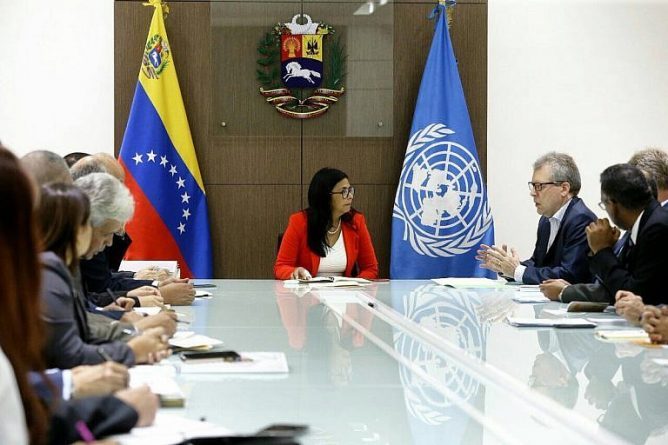 The vice president of the Bolivarian Republic of Venezuela, Delcy Rodríguez, invited representatives of the United Nations (UN) in the country on Thursday to collaborate in the Plan of Attention to the Victims of the Economic War that has been imposed by United States and its allied countries and also to revise in a scientific way the figures some of its agencies have been providing in recent weeks.

“We invite the United Nations System to integrate and complement the Plan of Attention to the Victims of the Economic War and the blockade against Venezuela, which aims to serve the most vulnerable, those who have suffered most from this criminal blockade against our country and that affects without any distinction the Venezuelan population, “she said, after meeting with the delegates.

Rodriguez said that during the meeting they highlighted how, through international cooperation, they have managed to improve health indicators such as vaccination, measles and diphtheria control, as well as education, public service, drinking water and nutrition.

On June 6, the president of the Bolivarian Republic of Venezuela, Nicolás Maduro, reported that measles cases in the country decreased by 99% and diphtheria by 89%.

In this sense, the executive vice president requested the correction of figures published by some United Nations agencies, without consulting the National Government, which, in their consideration, adds to the political agenda of aggression carried out by the United States against the Venezuelan people.

“We have asked for these figures to be corrected in a scientific, professional manner and taking into account the seriousness of our relationship and the mutual respect we have with the system,” Rodríguez added. This week UNCHR presented figures about Venezuelan migration that were criticized by the Venezuelan government.

Chancellor Jorge Arreaza has been questioning in recent months that South American nations have not provided figures requested by Venezuela to properly evaluate the migration phenomena. Maduro’s government recognizes it is an issue but also says it is over estimated in order to feed the “humanitarian crisis” media matrix aiming for a foreign military intervention.

She also reiterated that the economic blockade that the country has does not allow the arrival of food and medicines to the Venezuelan people, because the Venezuelan accounts were blocked, which has led to the deaths of more than 40,000 people, including children who were waiting for a bone marrow transplant.

“They are illegal, arbitrary and illegal sanctions that from the imperial centers have been imposed on the country, are crimes against humanity, because they violate the right to food, health and education,” said Rodriguez.

During her statements, Delcy Rodríguez, announced that these meetings with representatives of the UN in the country, will take place on a monthly basis.

“There have been meetings that are very fruitful and that will be done on a monthly basis in Venezuela,” she aded.