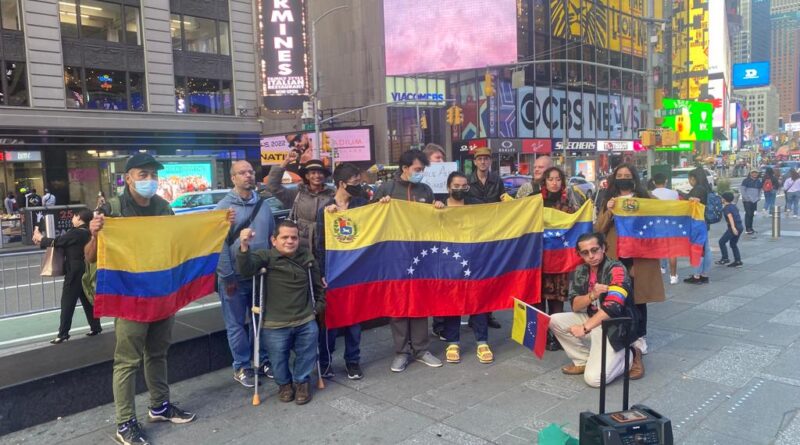 Caracas, October 18, 2021 (OrinocoTribune.com)—Social movements, progressive organizations, and international authorities expressed their outrage and demonstrated against the abduction of Venezuelan diplomat Alex Saab, following his illegal extradition from Cape Verde this past Saturday.

In New York this Sunday, October 17, a group of local activists gathered in support of the diplomat to demand justice for the arbitrary actions of the United States last Saturday, when the ambassador of Venezuela to the African Union was illegally extracted from Cape Verde in an abrupt and surprising manner.

In an emergency call issued less than 24 hours prior, the activists in New York also expressed their rejection of the disinformation campaign around the Venezuelan diplomat, and mobilized in defense of human rights and International Law with a demonstration held in Times Square.

Numerous organizations and public figures were represented at the demonstration including The Center for Political Innovation represented by Kiki Dewar, the Alberto Lovera Bolivarian Circle represented by Williams Camacaro, the Ecuadorean activist known on Instagram as @jass.with.smoke, City University of New York professor Danny Shaw, among many others. Activists and speakers defended the sovereignty of Venezuela and other nations targeted by the US and European Union for their refusal to submit to their criminal international hegemony.

Alliance for Global Justice and International Action Center working together in the International #FreeAlexSaab Committee
On its Twitter account, the Alliance For Global Justice posted an invitation for people to join its campaign launched a few months ago, with more than 17,000 signatures already, demanding US and Cape Verdean authorities release the abducted Venezuelan diplomat. Saab’s crime against the empire was attempting to procure food and medicines for millions of Venezuelans critically affected by the illegal and immoral US and European economic blockade.

The Alliance for Global Justice, the International Action Center, and Task Force on the Americas have formed, alongside other significant US organizations, the International Free Alex Saab Committee, that organized a delegation to Cape Verde with Sara Flounders, Roger Harris and Bishop Filipe Teixeira. The Committee has also helped to organize previous demonstrations in the US, street actions, and more recently participated in a delegation to the annual conference of the African Bar Association held in Niamey, capital of the Republic of Niger. The Committee was represented by Canadian legal expert John Philpot.

Join the campaign to #FreeAlexSaab 👉https://t.co/d1c5h4twhk

An update on the Alex Saab case below, demonstrating the ongoing flagrant violation of international law https://t.co/UIF156GVsR

Many of the activists and organizations supporting the campaign agree that despite the latest circumstances, this new sudden action by the Biden administration, instead of weakening the morale of those demanding real justice for Venezuela and the international system, will revitalize and empower not only the cause of Venezuela but the cause of justice for all those individuals and countries affected by the US and Europe’s gangsterism.

Code Pink also relaunches online campaign
This Monday, US social organization Code Pink relaunched its drive for signatures to request the US Department of Justice drop the charges against Alex Saab. Through its Twitter account, Code Pink invites people to subscribe to the campaign which repudiates the torture to which the Venezuelan diplomat was subjected in Cape Verde, and the flagrant violations of international law led by the US in its efforts to crush Venezuelan sovereignty.

Sign our petition demanding the DOJ drop the charges against Alex Saab:https://t.co/uOzYz0NXIz

The group requests the release of Saab and confirms that this action will contribute to the cause of peace in the country. The abduction of the Venezuelan diplomat Alex Saab, under the guise of extradition, is a flagrant violation by the United States of the principles of the UN Charter, human rights, and the sovereign immunity of nations.

Iran and Russia protest
Countries such as Iran and Russia also expressed their rejection of the illegal process. The ambassador of the Russian Federation in the Bolivarian Republic of Venezuela, Sergey Mélik-Bagdasárov, described it as a “kidnapping.”

“Our energetic and resounding protest to the kidnapping of Alex Saab, Special Envoy of the President of Venezuela Nicolás Maduro,” stressed the Russian ambassador through a post published on Twitter.

The Ministry of Foreign Affairs of the Eurasian nation had already warned, in August, that Saab’s extradition would constitute “a dangerous precedent” for any diplomat in the world.

Abdollahian stated, “we consider the arrest of Alex Saab, a Venezuelan diplomat, and his extradition to the United States, as an act of piracy and an attack on Venezuelan sovereignty.” The diplomat made the statement at a press conference during which it was reported that, during the last 48 hours, Saab was transferred from Cape Verde to the US in a flagrant violation of the provisions of the Vienna Convention.

Likewise, they reiterated their rejection of the imposition of unilateral coercive measures and any other form of foreign intervention in the internal affairs of the states, according to a press release issued by the Venezuelan Foreign Ministry.