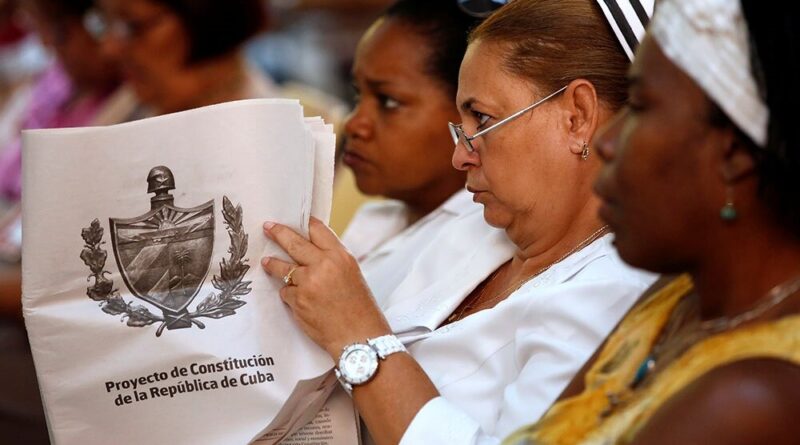 As a follow up to the July 11-12 protests, the same opposition figures and groups that participated in them, requested permission for marches to be simultaneously held in several cities across Cuba on November 15. In response, the local municipal authorities, for example Old Havana, responded by pointing out that “Article 56 of the [Cuban] Constitution, which is mentioned as a legal basis [for the march permit], provides among its requirements for the exercise of the right to demonstrate legally and “in respect for public order and in compliance with the rules established by law.”

In other words, while the signatories invoke Article 56, they only recognize the portion concerning the “right to demonstrate peacefully” in the abstract as the request published in the FaceBook page Archipiélago reveals, the main platform spear heading the second phase of “colour revolution.” They are ignoring that section of the same article that stipulates limits: “Respect for public order and compliance with the rules established by law.” Which Cuban law are the signatories avoiding? The municipal decision goes on to explain: “Article 4 of the Constitution defines that the socialist system endorsed by this Constitution is irrevocable, therefore any action exercised against it is illicit.”

Contrasting US and Cuban Constitutional Rights
The mainstream media in the US and those in Cuba who have been denied permission then invoke self-righteous statements protesting that the safeguard of socialism should not be a precondition to demonstrate. They are outraged that any limitation may be imposed on these rights? What is their reasoning? Is it possible that they are so imbued with the US-centric notions of “freedom of expression” and “right to assemble” in the abstract, as found in the US Constitution? Let us explore. The First Amendment of the US Constitution stipulates:

“Congress shall make no law respecting an establishment of religion or prohibiting the free exercise thereof; or abridging the freedom of speech, or of the press; or the right of the people peaceably to assemble, and to petition the Government for a redress of grievances.”

Unlike the Cuban constitution, there is no explicit reference in the US Constitution to protection of the capitalist system. One might respond by arguing that there is indeed some kind of reference, as in for example, the notorious Preamble: “We the People of the United States, in Order to form a more perfect Union, establish Justice, insure domestic Tranquility…” Does the latter mean that nothing can upset or challenge the capitalist status quo? We can only surmise that this is the case, as the entire history of the United States is based on the suppression of uprisings by the Indigenous Nations, African-Americans, the working class and youth against capitalism and imperialism. Whether one can extrapolate from “domestic tranquility” to mean the right of capitalism to operate in peace or not, it nevertheless remains a foregone conclusion: in practice, for the white supremist US elite, freedom of speech and right to assembly is tolerated unless it challenges the capitalist-imperialist status quo.

In contrast, the Cuban constitution and political system is frank and honest: Do not cross the red line we have established to defend our socialist system. Where does this limitation on freedom of expression and assembly come from?

The local authorities elaborate on their decision: “The Constitution of the Republic was widely debated and approved in a referendum by 86.85 percent of the voters, an overwhelming majority that sovereignly and freely chose the socialist system, its irrevocability and the right to fight by all means against anyone who tries to overthrow the established political, social and economic order.”

Communism: They Missed the Train
The process involved at arriving at this constitutional conclusion has been lengthy and complex, but also characterized by considerable public engagement and contribution. The first draft was made available to the entire Cuban population in 2018. Over many months, Cubans read the document and made a total of 780 suggestions and 9,600 proposals. Many of these were incorporated in the final draft, which was presented to the public.

One of the main sponsors of this month’s march request (and also involved in the July 11-12 protests), La Unión Patriótica de Cuba (UNPACU), called for a “massive and resounding ‘No’” on the February 24, 2019 Constitutional referendum vote.

However, how did it play out?

Not only did this mean a clear rejection of the No vote, but the voter turn-out increased in comparison to the previous vote in the last general elections in 2018, which registered an 82.9% voter turn-out. Furthermore, this thirst to fully participate in the referendum translated into an expressed desire to further enshrine socialism in the new Constitution and even expand on that goal. In the initial draft sent to the citizens for discussion, the ultimate goal of communism was not present. However, revolutionary blogs and journalists challenged this omission. The author was in Havana at the time and witness to the lively debate in the neighborhoods and on television on the issue to exclude or include communism. We recall that La Unión Patriótica de Cuba (UNPACU) and the rallying call of other opposition groups on July 11-12 was then and is now in October 2021, “Down with Communism.” However, in the course of the debates at the grass roots level, this was the opportunity for the La Unión Patriótica de Cuba (UNPACU) to sway the electorate against communism being enshrined in the Constitution. It must be pointed out as clearly as possible that they did, indeed, miss the train.

In its futile appeal for a No vote, and perhaps reading the writing on the wall, UPAC asserted that the referendum and elections are “rigged.”

However, the author participated in all stages of the Cuban electoral system in 1997-98 and there is no evidence at all of fraud. In 2010, another study in Cuba confirmed this.

The Proof of the Pudding is in the Eating
In its decision, the local municipal assembly in Havana writes that:

“The promoters and their public projections, as well as the links of some with subversive organizations or agencies financed by the US government, have the manifest intention of promoting a change of political system in Cuba. This reaffirms that the announced march, whose organizational scheme is conceived simultaneously for other territories of the country, constitutes a provocation as part of the strategy of ‘regime change’ for Cuba, rehearsed in other countries…Furthermore, as soon as it was announced, the march received public support from US legislators, political operators and media that encourage actions against the Cuban people, attempting to destabilize the country and urging military intervention.”

Is this at all far-fetched? Hardly, the CNN reporter in Havana for example, in his enthusiasm to put a peaceful face on the efforts of protest organizers, had no difficulty violating his journalistic integrity by challenging the veracity of the Cuban government’s decision based on facts. He asserted that “Cuban government officials are making it clear that a request to hold a peaceful protest next month will not be authorized.” Inadvertently, he proves the point, namely that foreign “media encourage actions against the Cuban people.”

Nor is he alone in exhibiting the old adage about the “proof of the pudding.”

The municipal authority wrote: “As soon as it was announced, the march received public support from US legislators, political operators.” Indeed, after showing support for the march, once the decision came down on October 12, here are the words of US State Department spokesperson Ned Price, at a press conference later that day:

“QUESTION: Yeah. I wanted to ask you about the Cuba’s Government decision to ban a protest that was planned for November 15th, claiming that the organizers are backed by the US to overthrow the regime. Do you have any comment on that, any response?

MR PRICE: Well, let me make one thing very clear at the outset. What happened in July, what transpired in the days and the weeks after that, was not about the United States. It was about the conduct of the Cuban regime, the unmet aspirations of the Cuban people for freedom, for dignity, for prosperity, the elements that they have been denied by this regime for far too long, since 1959.”

Then with poker-faced elaboration, after denying US involvement, Ned Price volunteered the State Department as the megaphone for the subversive elements. “We call for the government in Havana to respect the fundamental freedoms and the fundamental rights of the Cuban people.”

On October 12, the Miami Herald reports on a Telegram messaging system press conference from Cuba leading up to the request for a march permit and featuring the Havana individual who filed the request. It is very revealing.

RELATED CONTENT: For the Sake of Global Health: USA, Stop Lying About Cuba!

Firstly, the Miami Herald fondly recalls that “on July 11, hundreds of Cubans took to the streets to ask for regime change,” which is the main reason that the Municipal officials refused the permit.

Secondly, the Miami-based outlet quotes the signatory for the permit, “they always complain about the ‘blockade,’ he said, referring to the US embargo. ‘There is no worse blockade than the internal blockade on every Cuban citizen in this country.’” This is a dead give away about the intentions of these individuals, who do not seem to have a country.

Thirdly, we have to admire the political acumen of the signatories. They seem to be very aware that they have opened a beachhead among sections of the “left” in the US and Canada and want to go further. The Miami Herald quotes him:

“I am calling on the left worldwide, which is usually complicit and unfortunately usually behaves in a hypocritical way, to tell them that there are no left or right dictatorships, good or bad, there are dictatorships, and we must oppose them all, whatever their political sign.”

In contrast, for example, an independent watchdog journalism organization MintPress News in the US and the anti-imperialist socialist The Canada Files in Canada countered those sections of the sold out “left” in their respective countries, who were cheerleading the attempted July 11 “colour revolution” in Cuba.

Will they learn their lesson as we head into another one?