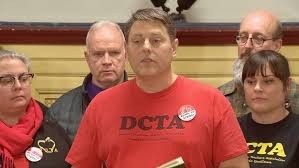 The final day of strike voting occurred Tuesday from 4 p.m. to 9 p.m. The first day a strike can start, legally, is January 28th.

The strike intends to stop what seems like endless negotiating – with teachers on the picket lines —  all to mainly increase teacher salaries.

“I have to live with multiple roommates just to afford the cost of living,” one teacher told FOX31 reporter Michael Konopasek.

Under the proposal put forward by DPS , the district said the average teacher’s salary would increase by 10 percent.

But the union disputes that, saying the district is including an already promised cost of living increase into its rhetoric.

“We have a strong group of substitutes who work with us on a regular basis,” Superintendent, Susana Cordova said in preparation for the possible strike.

DPS has 1200 substitute teachers in their active pool, 300 are retired teachers. The district is now recruiting furloughed federal workers as potential subs and are attending furloughed worker fairs.

DPS said they will prioritize students with special needs in the deployment of alternative staffing arrangements. They said they will utilize central office administrators, many of whom are veteran teachers and specialized service providers.

Denver teachers haven’t been on strike since 1994.