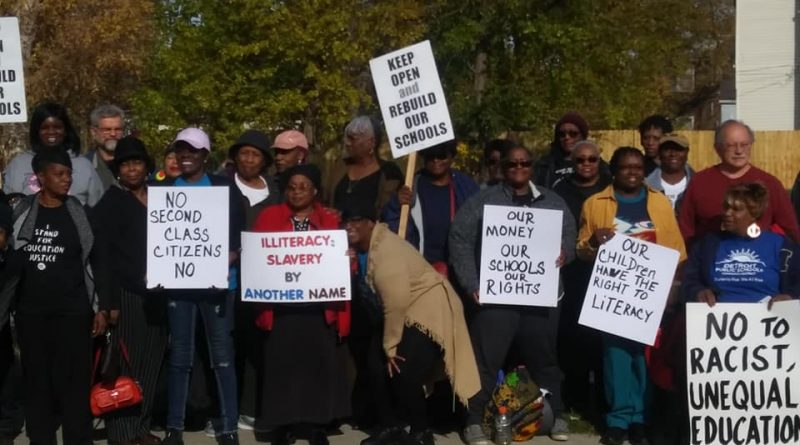 Editorial note: While Cuba, Venezuela, Bolivia, Nicaragua among other Latin American socialist countries have launched massive campaigns to eradicate literacy in recent years and push the population into the regular educational system, our African-american brothers and sisters in the US are dealing with the pauperization of educational services and functional illiteracy”.

On October 24, 2019, the Sixth Circuit Court of Appeals will hear oral argument on a remarkable court case. The case, Gary B, et. al. v. Gretchen Whitmer and the Michigan State Board of Education, centers on whether students in the United States are guaranteed the right to access literacy under the U.S. Constitution.

Defendants in the case were Governor Richard Snyder and the Michigan State Board of Education members in their official capacities. Governor Gretchen Whitmer, elected in 2018, has since replaced Snyder as Defendant. Despite pronouncements that she supported the plaintiffs when she was running for office, Governor Whitmer has chosen to defend the state’s position and joined in the call for dismissing the case since being elected.

In their complaint, the Plaintiffs cited a litany of horrors facing students in the City of Detroit that effectively amount to a denial of the right to access to literacy and equal protection under the law. The factual allegations in the complaint include:

While the complaint cites conditions existing at the time the complaint was filed in 2016, there has been little change or improvement in the ensuing years. In 2019, the DPS reported that Detroit test scores among students in grades 3 to 7 “rose” so that now a whopping 12.7% are proficient in reading and 10.1% are proficient in math. A study by Raising a Reader reported that as of 2017 there were 80,000 children under the age of eight living in Detroit, with more than 60 percent of Detroit’s children under the age of five living in poverty. Approximately 86 percent of Detroit’s third-graders were not reading at grade level, which makes it more likely these children will struggle academically throughout their lives without intervention.

In an amicus brief in support of the Plaintiffs filed by State Board of Education member Pamela Pugh, she examined how the system of education funding in Michigan perpetuates the vast racist disparities that exist across Detroit schools, The state fundamentally took over funding for school operating expenses in 1993, but in doing so it preserved in perpetuity the disparities already existing between the Black cities and the richer white suburbs. In addition, in the ensuing years since the state takeover of education funding, Michigan has ranked last in per pupil growth in student funding among all the 50 states. The state has specifically cut funding for at risk students by 60% since 2001.

While the state funds school operations, funding for infrastructure repair is dependent on local property tax revenues, DPS Superintendent Nicholas Vitti recently stated that Detroit schools need to raise $500 million for infrastructure repair: to fix the leaking ceilings, inadequate heat and air conditioning, to get rid of vermin infestation, and to remove the toxic lead and copper from continuing to flow into Detroit schools. However, property tax collections in Detroit, which took a hit with the mass foreclosures resulting from the banks’ predatory lending practices in the city which caused 65,000 Detroiters to lose their homes from 2005-2010, have continued to decline in the city despite large scale commercial developments throughout the downtown and midtown neighborhoods. This is a result of the fact that these developments are subsidized by tremendous tax breaks for the developers. Most notorious are tax captures, under which the increased property tax revenues resulting from this development are captured, or turned over, to billionaire developers like Ilitch, Gilbert, Ford, Gores, etc. The state government’s Michigan Strategic Fund has continued to approve these tax captures, robbing Detroit schools to fund billionaire gentrifiers. This issue is examined in depth in the amicus brief filed by Pamela Pugh in Plaintiffs’ appeal.

Despite the horrendous conditions in Detroit schools cited by Plaintiff, on June 29, 2018, Judge Stephen Murphy dismissed Plaintiff’s case. While acknowledging that the conditions cited in Plaintiffs’ complaint were nothing short of devastating, Judge Murphy held that the United States Constitution does not guarantee a minimum level of education by which a child can attain literacy – there is no right to access to literacy under US law. Judge Murphy further dismissed the Plaintiffs’ equal protection count, which asserts that the state of Michigan provides one level of education for students in the white, affluent suburbs, and another for poorer, predominantly African American cities. Judge Murphy accepted the state’s argument that the proper comparison was between Detroit schools and those of other poor Black cities like Pontiac, Flint, or Benton Harbor, not white suburbs with palatial schools like Birmingham, Grosse Pointe or Bloomfield Hills. This continues to be the state’s argument on appeal, even under liberal Democrat Gretchen Whitmer — limit the comparison to among the Bantustans under Michigan apartheid’s education system.

The Detroit fight to guarantee access to literacy as a basic constitutional right is historic. But the ultimate determination will not be in the courts, but by the struggle of the teachers and community against the racist education system that perpetuates white supremacy across the US. The Chicago Teachers strike is showing the way in how this battle must and will be fought and won in the years to come.

Featured image: Detroit students have filed a lawsuit against the Michigan Governor and the Michigan State Board of Education asserting the constitutional right to literacy under the U.S. Constitution. | Photo: Brandy Baker / The Detroit News