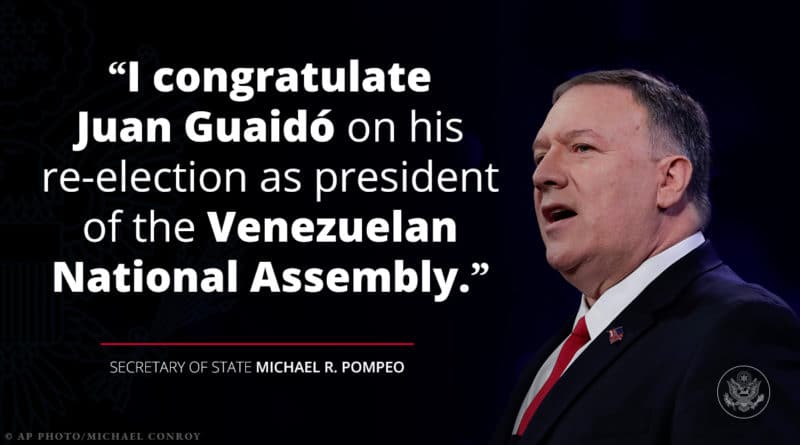 Caracas, Jan 6th, 2020 (Orinoco Tribune).- In the middle of a very confusing scenario caused by a strong security scheme set to forbid the access of deputies barred from voting by Venezuelan Supreme Court, yesterday a new Executive Board for the National Assembly (AN) was elected and voted in with the legal quorum. Anti-Chavista deputy Luis Parra was chosen as the new AN president with 30 opposition dissident deputies joining the Chavista bench in a blow to the US promoted regime change operation.

US meddling again in Venezuelan internal affairs through State Departmen Michael Kozak threatening anti-Chavista deputies to vote "right" tomorrow electing AN board. It also denotes A LOT of uncertainty in Washington about the election tomorrow 😉😡🤣 https://t.co/Q9JRSxtwat

On its twitter account, the Orinoco Tribune denounced US “preventive” meddling in the voting when media outlets in Venezuela made public information about Under Secretary for Western Heispheric Affairs, Michel G. Kozak, threatening deputies to “vote right” or prepare themselves to face US sanctions. It was described as a clear evidence of the US meddling in Venezuelan internal affairs but also was seen as evidence that Guaido (and the White House) lacked the votes needed to re-elect him as leader of the AN.

Maduro & his cronies harass, arrest, or attempt to bribe democratically elected members of @AsambleaVE as they prepare to elect the National Assembly president on January 5 – sadly typical repression of the Venezuelan people. #Venezuela

The previous day, Kozak had filled his timeline with unproven allegations that President Maduro was bribing opposition deputies or politically prosecuting them. No evidence has been shown (no audio clip or video) to support the alleged bribery or threats.

When talking about political prosecution, it should be remembered that in 2019 at least 5 coup d’etat attempts were recorded, led by Guaido and his cronies with US support, not to mention the assassination attempt on President Maduro in 2018. All these events have had the participation of anti-Chavista deputies who counted on their parliamentary immunity to avoid prosecution.

RELATED CONTENT: Chavista Deputy Francisco Torrealba: Guaido Didn’t Want to Enter Parliament Because he Didn’t Have the Votes and Wanted to Delay it

Juan Guaido’s defeat on Sunday, January the 5th, startled Washington because they never counted on a rebellion among anti-Chavismo even though Chavismo is still a minority within the Venezuelan National Assembly.

Washington did not wait but instructed their puppets in Venezuela to run to the headquarters of “El Nacional” (a right wing newspaper) and hold an improvised session, violating all legal rules of assembly for the AN, including the illegal “remote” votes (that no one saw) of more that 30 deputies living abroad while evading Venezuelan justice.

The fact is that present were only fewer than 70 deputies which meant the already illegal session lacked a quorum.

Under those circumstances, Juan Guaido proclaimed himself (very similar to 2019) AN president and as usual the US apparatus and MSM (partners in crime) started their campaign calling him the “re-elected AN president”.

Congratulations to @JGuaido on his re-election to the @AsambleaVE! Arrests, bribes and blocking access to its building were unable to derail #Venezuela’s National Assembly. Only a transitional government organizing free and fair presidential elections can end the crisis.

.@SecPompeo: I congratulate @JGuaido on his re-election as president of the Venezuelan National Assembly and condemn the failed efforts of the former Maduro regime to negate the will of the democratically elected @AsambleaVE. pic.twitter.com/laWQWWgoM7

Later on Sunday, President Nicolas Maduro rejected the blatant US meddling and even referred to anti-Chavista deputies receiving calls directly from US officials. He called for a strong diplomatic response from the Venezuelan Minister of Foreign Affairs.

RELATED CONTENT: Why Were Some National Assembly Members Not Allowed to Enter Today’s Session? (Videos)

.@SecPompeo: after the resounding failure of his 2019 coup strategy, Trump organized today a new circus, aiming to prolong the agression against the Venezuelan people &vthe fiction of a fake and unexistent government. Results: another intromission, another blunder,another failure https://t.co/SPIaWRq6oY

RT @jaarreaza: We reject Trump Administration's vulgar interventionism in the internal affairs of Vzla & its institutions. They don't fully understand that we're an independent & sovereign country. They should deal with the disaster they intend to provoke with new wars for oil.

The last event in this latest round of US aggression against Venezuela’s ‘resolve to be independent”, as expressed by Oscar Figuera, Secretary General of the Venezuelan Communist Party, was a press conference held by Elliott Abrams today in Washington.

An expected new round of sanctions has not yet been announced.

A tweet from OAS, Luis Almagro, one of the best State Department workers, was also visible on twitter on Sunday night.

Juan Guaido’s interim presidency was a blatant defeat for the US and yesterday’s last minute move makes it even more awkward because he broke all decorum to declare himself AN President. Today the world saw Luis Parra taking control of his office as new president of the Venezuelan National Assembly.

Reports indicate that first ordinary meeting in the National Assembly -tomorrow- will be busy as anti-Chavismo will promote a new circus to feed the MSM narrative.