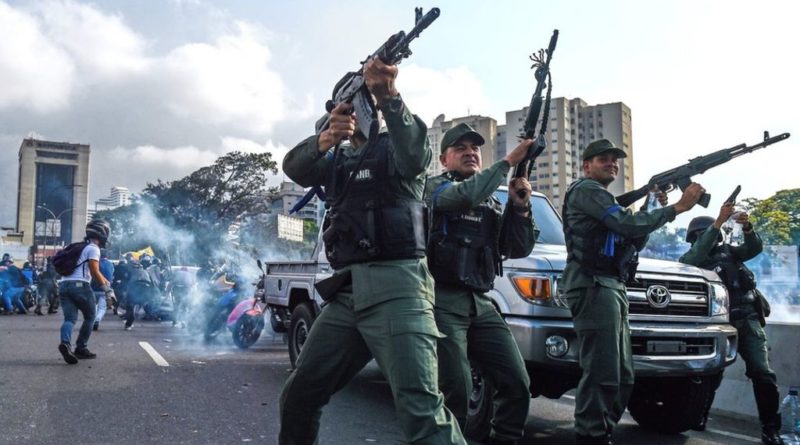 Five major violent right-wing operations in Venezuela were put out of commission in 2019. That explains, in part, why the country is ending the year with a tranquility that many find surprising. The last major operation was supposed to take place Dec. 15.

No one could have known at the beginning of 2019 how the year would end. Juan Guaidó had proclaimed himself “president” of Venezuela in an operation created and publicly supported by the U.S. under President Donald Trump. The country appeared to be heading for a violent confrontation with no end in sight.

That forecast was sold to the entire world with a campaign of media engineering by many “analysts” whose predictions were full of errors. There are only a few days left until the end of the year, and Venezuela maintains a tranquility on the surface that surprises anyone who walks through the country’s streets: The opposition is no longer mobilizing. Chavismo has conserved its normal ability to deploy its forces, and a majority of the population is thinking about how to make the holidays a celebration.

Why didn’t the plan for a swift Guaidó-led coup work out? In large measure, it was because the Bolivarian National Armed Forces (FANB) and the central core of Chavista political power were not broken.

Another reason is that at least five violent actions that were supposed to bring the coup forces victory failed — two of which had been put in motion and three of which were deactivated before they could take place. The last one was supposed to happen on Dec. 15 with attacks on several military units.

The first major action occurred Feb. 23, the day which marked the high point of the accumulation of forces for the national and international bloc of conspirators. Guaidó had proclaimed himself “president” Jan. 23, exactly one month before the so-called “trucks with humanitarian aid” were to enter Venezuela by force from the city of Cúcuta in Colombia.

The operation’s collapse was as great as its buildup. The trucks failed to cross into Venezuela. The shock troops set two semitrailers on fire on one of the cross-border bridges. Everything was captured [on camera] by the corporate media and witnessed by the governments of the region, the U.S. and Europe.

The meeting of the Lima Group in Bogotá that followed the events of Feb. 23 proved that the promise of the Venezuelan right wing had turned out to be a fraud and that no one heeded the speeches of Guaidó or Julio Borges, a fugitive from Venezuelan justice who had called for an escalation with international intervention.

On the morning of April 30, the country was surprised by a video broadcast by Guaidó and Leopoldo López, leader of Popular Will, the party of the self-proclaimed “president,” and a small group of military personnel with weapons in hand. In the video, they claimed to be at the La Carlota military base in the heart of Caracas and called on the military forces and the people to support them.

It quickly became known that the video was recorded on the outskirts of La Carlota and that, in fact, the military base had never been taken. The impact of the stunt led by López, who had recently escaped from house arrest, was short-lived.

The coup perpetrators had two key problems: No sector of the FANB joined them, and the response from their supporters in the streets was small. Without weapons and without people, the attempt at an uprising merely turned into an escape for the protagonists, like López. He was received at the Spanish Embassy, where he still remains. Another instigator, Christopher Figuera, head of the Bolivarian Intelligence Service (SEBIN), escaped to Colombia and then to the U.S.

The third major action was supposed to take place June 23 to 24. Venezuela’s Minister of Communication Jorge Rodríguez unveiled the dismantled plan on national television on June 26. He said, “We had been monitoring all these operations for 14 months, all of the people involved in conspiratorial acts, riots, bombings and explosions. We had been following them; we had attended all the meetings for planning the coups d’état.”

Rodríguez said the plan included several simultaneous actions: the assassinations of President Nicolás Maduro; Diosdado Cabello, president of the National Constituent Assembly; and other officials. Also planned were assaults on two military battalions and the headquarters of the Military Counter-Intelligence Directorate, the bombing of the La Carlota base and a break-in of the Venezuelan Central Bank’s vaults.

The climax was to be the ultimate seizure of the Miraflores Presidential Palace. As one of the conspirators known by his alias, Marino said, they were going to “Burn everything to save the country.”

A similar scheme was broken up in August. This time it involved attacks to be carried out with C4 explosives at different key points in Caracas: at the headquarters of the Special Action Forces (FAES), in the “23rd of January” neighborhood and at the Palace of Justice.

Rodriguez revealed on Aug. 31 on national TV that the plan was being directed from inside Colombia, where three paramilitary training centers were preparing for these actions. Two of the camps — one of which was 2.5 kilometers from the border — were for training in explosives. The third camp was for military training.

Rodriguez stated, “Everything leads to Iván Duque, Álvaro Uribe [former president of Colombia], to North Santander [a department of regional government in Colombia], to the paramilitaries who are happily thriving in the sister Republic of Colombia.” He pointed out that the Colombian government had given refuge to a large number of people being sought by the Venezuelan justice system for such actions.

It was not the first time the Venezuelan government denounced the existence of paramilitary training camps in Colombia preparing to attack Venezuela. After the attempted assassination of President Maduro in August 2018, Rodríguez charged that the training center for the attacks was located on the other side of the border, in the town of Chinácota.

The final action in 2019 was due to take place Sunday, Dec. 15. Part of the plan was to attack two military bases in eastern Sucre, which would be connected to similar actions in the states of Zulia, Táchira, Barinas, Aragua and Caracas.

President Maduro reported: “We have a conspiracy that was meant to strike several Bolivarian Army and Bolivarian National Guard barracks in various cities of the country to provoke a massive military bloodbath to overshadow and bathe the Christmas season in blood.” He accused López and Guaidó of being responsible for the actions and stressed the U.S. role.

If Venezuela is calm by the end of the year, it is because, among other things, several of the planned violent actions were disrupted as they happened or before they could happen. The scenario would be profoundly different if one of the plans had succeeded.

That is one reason for the crisis within the opposition. Those forces are  approaching January divided and without political initiative. They are embroiled in corruption scandals. Also, the Trump administration is distrustful of the capabilities of the Venezuelan right wing after these obvious fiascos.

The upcoming critical date is Jan. 5. On that day, it will be known if Guaidó is to continue as president of the National Assembly and be recognized by the U.S. as the acting president of Venezuela, or if he will be displaced by another faction.

In the meantime, the plans for violent actions have not stopped. For several years, a sector of the opposition has bet on a violent solution only — and that the U.S. will plan covert actions to achieve the overthrow of Maduro.