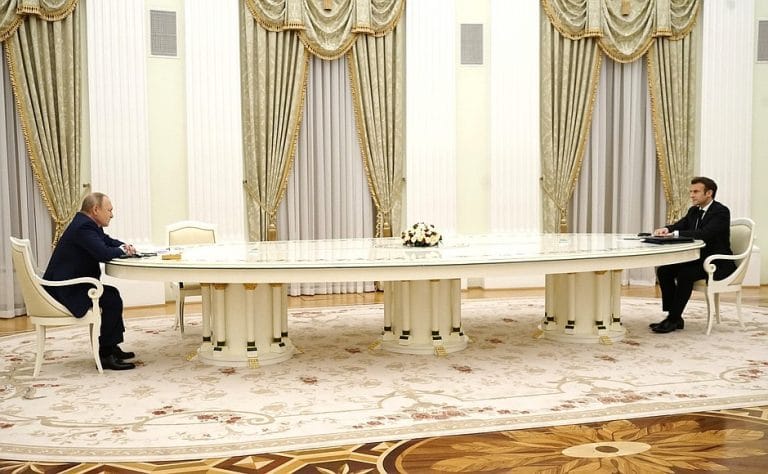 1.- Mr. Macron went to Moscow to see Mr. Putin with a simple 4-stage plan in mind:
2.- Clinch a wide-ranging deal with Putin on Ukraine, thus stopping “Russian aggression.”
3.- Bask in the glow as the West’s Peacemaker.
4.- Raise the EU’s tawdry profile, as he’s the current president of the EU Council.
5.- Collect all the spoils then bag the April presidential election in France.

Considering he all but begged for an audience in a flurry of phone calls, Macron was received by Putin with no special honors. Comic relief was provided by French mainstream media hysterics, “military strategists” included, evoking the “French castle” sketch in Monty Python’s Holy Grail while reaffirming every stereotype available about “cowardly frogs.” Their “analysis”: Putin is “isolated” and wants “the military option.” Their top intel source: Bezos-owned CIA rag The Washington Post.

Still, it was fascinating to watch—oh, that loooooong table in the Kremlin: the only EU leader who took the trouble to actually listen to Putin was the one who, months ago, pronounced NATO as “brain-dead.” So the ghosts of Charles de Gaulle and Talleyrand did seem to have engaged in a lively chat, framed by raw economics, finally imprinting on the “Jupiterian” that the imperial obsession on preventing Europe by all means from profiting from wider trade with Eurasia is a losing game.

After a strenuous six hours of discussions Putin, predictably, monopolized the eminently quotable department, starting with one that will be reverberating all across the Global South for a long time: “Citizens of Iraq, Libya, Afghanistan and Yugoslavia have seen how peaceful is NATO.”

There’s more. The already iconic Do you want a war between Russia and NATO?—followed by the ominous “there will be no winners.” Or take this one, on Maidan: “Since February 2014, Russia has considered a coup d’état to be the source of power in Ukraine. This is a bad sandbox, we don’t like this kind of game.”

The “real issue behind the present crisis”
Macron for his part stressed, “new mechanisms are needed to ensure stability in Europe, but not by revising existing agreements, perhaps new security solutions would be innovative.” So nothing that Moscow had not stressed before. He added, “France and Russia have agreed to work together on security guarantees.” The operative term is “France.” Not the non-agreement capable United States government.

Anglo-American spin insisted that Putin had agreed not to launch new “military initiatives”—while keeping mum on what Macron promised in return. Kremlin spokesman Dmitry Peskov did not confirm any agreement. He only said that the Kremlin will engage with Macron’s dialogue proposals, “provided that the United States also agrees with them.” And for that, as everyone knows, there’s no guarantee.

The Kremlin has been stressing for months that Russia has no interest whatsoever in invading de facto black hole Ukraine. And Russian troops will return to their bases after exercises are over. None of this has anything to do with “concessions” by Putin.

And then came the bombshell: French Economy Minister Bruno Le Maire—the inspiration for one of the main characters in Michel Houellebecq’s cracking new book, Anéantir—said that the launch of Nord Stream 2 “is one of the main components of de-escalating tensions on the Russian-Ukrainian border.” Gallic flair formulated out loud what no German had the balls to say.

In Kiev, after his stint in Moscow, it looks like Macron properly told Zelensky which way the wind blows now. Zelensky hastily confirmed Ukraine is ready to implement the Minsk agreements; it never was, for seven long years. He also said he expects to hold a summit in the Normandy format—Kiev, the breakaway republics of Donetsk and Luhansk, Germany and France—“in the near future”. A meeting of Normandy format political advisers will happen in Berlin on Thursday [February 10].

Way back in August 2020, I was already pointing to which way we were heading in the master chessboard. A few sharp minds in the Beltway, emailing their networks, did notice in my column how “the goal of Russian and Chinese policy is to recruit Germany into a triple alliance locking together the Eurasian land mass a la Mackinder into the greatest geopolitical alliance in history, switching world power in favor of these three great powers against Anglo-Saxon sea power.”

Now, a very high-level Deep State intel source, retired, comes down to the nitty gritty, pointing out how “the secret negotiations between Russia and the US center around missiles going into Eastern Europe, as the US frantically drives for completing its development of hypersonic missiles.”

The main point is that if the US places such hypersonic missiles in Romania and Poland, as planned, the time for them to reach Moscow would be 1/10 the time of a Tomahawk. It’s even worse for Russia if they are placed in the Baltics. The source notes, “the US plan is to neutralize the more advanced defensive missile systems that seal Russia’s airspace. This is why the US has offered to allow Russia to inspect these missile sites in the future, to prove that there are no hypersonic nuclear missiles. Yet that’s not a solution, as the Raytheon missile launchers can handle both offensive and defensive missiles, so it’s possible to sneak in the offensive missiles at night. Thus everything requires continuous observation.”

RELATED CONTENT: Along the Belt and Road: Breaking the Cycle of Underdevelopment in Latin America

The bottom line is stark: “This is the real issue behind the present crisis. The only solution is no missile sites allowed in Eastern Europe.” That happens to be an essential part of Russia’s demands for security guarantees.

Sailing to Byzantium
Alastair Crooke has demonstrated how “the West slowly is discovering that that it has no pressure point versus Russia (its economy being relatively sanctions-proof), and its military is no match for that of Russia’s.”

In parallel, Michael Hudson has conclusively shown how “the threat to US dominance is that China, Russia and Mackinder’s Eurasian World Island heartland are offering better trade and investment opportunities than are available from the United States with its increasingly desperate demand for sacrifices from its NATO and other allies.”

Quite a few of us, independent analysts from both the Global North and South, have been stressing non-stop for years that the pop Gotterdammerung in progress hinges on the end of American geopolitical control over Eurasia. Occupied Germany and Japan enforcing the strategic submission of Eurasia from the west down to the east; the ever-expanding NATO; the ever de-multiplied Empire of Bases, all the lineaments of the 75-year-plus free lunch are collapsing.

The new groove is set to the tune of the New Silk Roads, or BRI; Russia’s unmatched hypersonic power—and now the non-negotiable demands for security guarantees; the advent of RCEP—the largest free trade deal on the planet uniting East Asia; the Empire all but expelled from Central Asia after the Afghan humiliation; and sooner rather than later its expulsion from the first island chain in the Western Pacific, complete with a starring role for the Chinese DF-21D “carrier killer” missiles.

The Ray McGovern-coined MICIMATT (military-industrial-congressional-intelligence-media-academia-think tank) complex was not capable to muster the collective IQ to even begin to understand the terms of the Russia-China joint statement issued on an already historic February 4, 2022. Some in Europe actually did—arguably located in the Elysée Palace.

This enlightened unpacking focuses on the interconnection of some key formulations, such as “relations between Russia and China superior to political and military alliances of the Cold War era” and “friendship which shows no limits”: the strategic partnership, for all its challenges ahead, is way more complex than a mere “treaty” or “agreement.” Without deeper understanding of Chinese and Russian civilizations, and their way of thinking, Westerners simply are not equipped to get it.

In the end, if we manage to escape so much Western doom and gloom, we might end up navigating a warped remix of Yeats’ Sailing to Byzantium. We may always dream of the best and the brightest in Europe finally sailing away from the iron grip of tawdry imperial Exceptionalistan:

Once out of nature I shall never take
My bodily form from any natural thing,
But such a form as Grecian goldsmiths make
Of hammered gold and gold enameling
To keep a drowsy Emperor awake;
Or set upon a golden bough to sing
To lords and ladies of Byzantium
Of what is past, or passing, or to come.