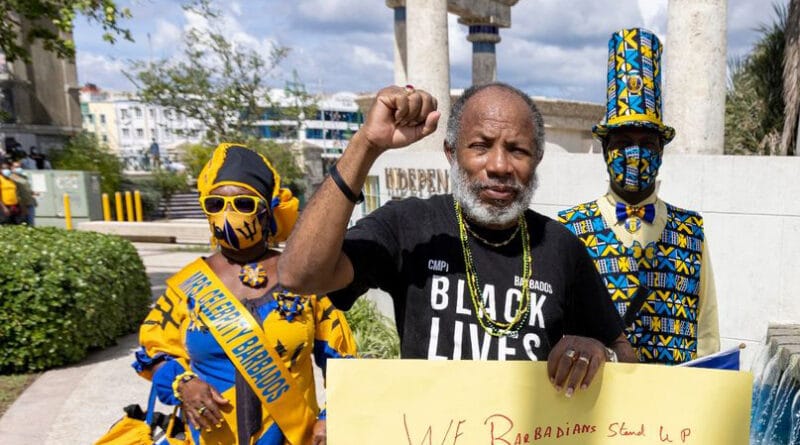 February 11, 2022 (OrinocoTribune.com)—”The attacks against Venezuela are not only against the Venezuelan people, they are against the poor and the powerless people of the Americas,” said Barbados-based activist and organizer David Denny of the Caribbean Movement for Peace and Integration this week.

The US and its allies have waged a non-stop economic and informational war on Venezuela’s Bolivarian Revolution since the election of Hugo Chávez in 1998. These attacks intensified in recent years with the imposition of unilateral coercive measures—euphemistically called sanctions—designed to strangle Venezuela’s economy. This campaign of economic warfare, which has increased greatly in scope since 2015, has caused at least 100,000 deaths, estimated historian and former United Nations human rights expert Alfred de Zayas.

The Bolivarian Revolution spearheaded by Chávez is committed to regional integration, and founded numerous initiatives to break the chains of imperialist economic dependency. As a result, the economic strangulation of Venezuela has cascaded into regional effects that harm Latin and Central America’s neediest populations.  “We are feeling it right here in our Caribbean region, because the embargo has created problems for the Petrocaribe agreement,” Denny said.

Venezuela’s Petrocaribe program sent oil to 17 participating Caribbean countries at rock bottom prices. Only 5% to 50% of the cost was paid for within the first two years, while the remainder of the fee was financed over a 17- to 25-year period, with only 1% interest. The Caribbean region’s most disadvantaged countries, Honduras and Haiti (Ayiti), both participated in the program.

Honduras, of course, exited when President Zelaya was overthrown by the military in 2009. By 2019 the Petrocaribe program had ground almost to a complete halt, due to the imposition of unilateral coercive measures against Venezuela’s state-owned oil industry. In Haiti, the cessation of Petrocaribe and ensuing fuel price increases ignited widespread demonstrations against then President Jovenel Moïse. This protest movement continued throughout 2020, and grew as Moïse continued to rule beyond the end of his mandate in February 2021. In July 2021, Moïse was assassinated at the hands of Colombian paramilitaries contracted by a Florida-based company.

In 2010, Venezuela cancelled $395 million of Haiti’s Petrocaribe debt and pledged $1.3 billion in aid after that year’s earthquake.

Prior to the cancellation, leaked US Embassy cables estimated that Haiti alone would save $100 million from the Petrocaribe agreement. As a result, when Chávez had visited the Antillean island in March 2007, he received a hero’s welcome. Tens of thousands of Haitians jogged alongside his motorcade from the airport.

David Denny made the comments during the monthly Hands Off Venezuela online picket, hosted by Fire This Time Movement’s Alison Bodine on February 10. This month’s event, like January’s, drew particular attention to the case of Venezuelan diplomat Alex Saab, currently imprisoned in the US. Saab was instrumental in allowing Venezuela to circumvent the US blockade of Venezuela and access food, medical supplies, and oil industry inputs during the difficult time of the COVID-19 pandemic. The long arm of US imperialism could not permit these deeds to go unpunished.

“The work that Alex Saab was doing—some may say it was for the Venezuelan people,” Denny said, “but for us in the Caribbean, it was for more than just the Venezuelan people, it was for many of the people of the Caribbean region that were benefitting from the Bolivarian Revolution. I just mentioned that we have benefitted from the Petrocaribe agreement, but we have also benefited from the eyecare program that was developed by Venezuela and Cuba, that helped many poor people in our region who were suffering for medical assistance. For that, Alex Saab, for us, is a contributor to that process, that would have helped to save, and created the conditions, for many Caribbean people to see. So we feel connected to Alex Saab, a diplomat who is now being harassed, imprisoned, and treated in the worst way, by the government of the United States of America.”

The eyecare program, Operation Miracle, brought sight to millions of the region’s poorest people, offering 100% free optometry consultations, exams, surgeries, and medication for low-income citizens of participating nations since 2004. The program, which began with Venezuela and Cuba, was extended to underprivileged residents of Antigua and Barbuda, the Bahamas, Barbados, Belize, Bolivia, Dominica, Grenada, Guyana, Haiti, Honduras, Jamaica, Nicaragua, Puerto Rico, Saint Lucia, Saint Kitts and Nevis, Saint Vincent and the Grenadines, Suriname, and Trinidad and Tobago. Over three million ophthalmology surgeries have been performed since its inception.

“The battle is not only for Alex Saab,” said Denny, “this battle is against US imperialism, that is doing everything possible to create economic and political problems for the people of Venezuela—and Venezuela is a friendly country that has been extending its arms to help our people.”

Featured image: Activist David Denny, of the Caribbean Movement for Peace and Integration, photographed during a November 2021 demo in Barbados. Credit: Mirror.