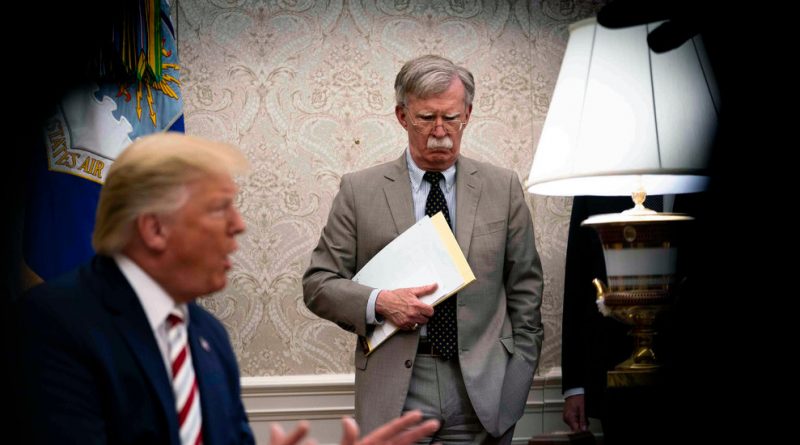 The president of the United States, Donald Trump, announced Tuesday that he has fired his National Security adviser, John Bolton. “Last night I informed John Bolton that his services are no longer necessary in the White House. I did not agree with many of his suggestions, as with others in the Administration, so I asked John for his resignation, which was given to me this morning”, the president communicated through his Twitter account.

“I thank John very much for his service. Next week I will appoint a new National Security advisor,” he added.

….I asked John for his resignation, which was given to me this morning. I thank John very much for his service. I will be naming a new National Security Advisor next week.

John Bolton is considered a neoconservative war hawk of the extreme right. He has worked in several republican presidential administrations. He is involved in a wide variety of conservative research centers and policy institutes, including the questionable National Rifle Association (NRA), the American Enterprise Institute (AEI), the Jewish Institute for National Security Affairs (JINSA), the Project for the New American Century (PNAC), Institute of East-West Dynamics and the Council for National Policy (CNP), several of these “think tank” organizations, generating right-wing thinking and intellectuals.

RELATED CONTENT: Taliban Predicts Losses of American Lives, Vows US ‘Will Suffer More Than Anyone Else’ as Trump Cancels Secret Talks

Bolton has been in favor of “regime changes” in countries such as Iran and North Korea, and has emphatically requested the termination of treaties with Iran on nuclear weapons. He supported the invasion of Iraq and still supports the position he had at that time. He also supported military actions in Syria, Libya and Iran.

Last December, the president of Venezuela, Nicolás Maduro, denounced Bolton for being in charge of a plan by the US government to assassinate him and install “a transitory Council of Government.” Maduro said that “he can decide on his own everything that has to be decided, and in the case of Venezuela, he says he will overthrow the government of Venezuela,” using Colombia as a proxy.

Disregarding what chavista public opinion in Venezuela believes the cause of this decision is, most agencies have reported that Trump’s position was based on internal disputes connected with the political crisis created by the announcement of secret peace talks with the Taliban scheduled to be held in Camp David this week. Bolton allegedly was not supportive of this initiative.

I offered to resign last night and President Trump said, “Let’s talk about it tomorrow.”

A few minutes after Trump’s tweet informing of the decision, Bolton tweeted “I offered to resign last night and President Trump said, “Let’s talk about it tomorrow.”, making most media believe that this story will be a big story.