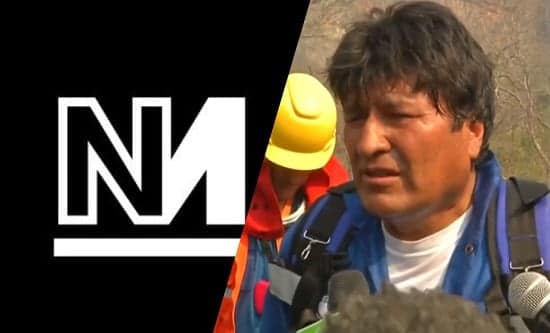 On 26 August, Novara Media’s website published a vicious and reactionary article titled ‘It’s Not Just Brazil’s Forests That Are Burning, Bolivia Is on Fire Too’ by prominent Extinction Rebellion speaker and activist Claire Wordley. Novara and Wordley are recycling from the same imperialist playbook which has been drawn on in recent attacks against Venezuela, Cuba and Nicaragua – the so-called Troika of Tyranny. The gist of Wordley’s article is that Bolivian President Evo Morales is to blame for the fires raging in the Amazon rainforest; that he is as ‘damaging as … the capitalists Morales claims to hate’; that he hasn’t responded to the fires effectively; and that when he has responded – such as by hiring a Boeing 747 Supertanker to douse the flames – he was forced to do so by ‘volunteer citizens’.

The Guardian and Independent promptly threw their weight behind this propaganda blitz: a 27 August opinion piece by Harriet Marsden in the Independent urges us to ‘look to Bolivia’, not Bolsonaro, when placing blame for the fires; and a 2 September Guardian headline tars Morales as a ‘murderer of nature’. This media offensive is evidently timed to try and exploit the Amazon fires to discredit Bolivia’s government in the run-up to the country’s general election on 20 October, in which Morales’ party Movement Towards Socialism (MAS) is expected to win a fifth term.

The core of Wordley’s article is claims by ‘Bolivian activist’ Jhanisse Vaca-Daza, a professional regime change operative and ‘the spearhead of a network of Western organizations that trained and advised the leaders of regime-change operations from Venezuela to Eastern Europe to the ongoing anti-China protests in Hong Kong’ (Grayzone). She was trained at the US’ Kennedy School which boasts all the key players in the recent attempted coup administration in Venezuela. Heavily funded by the US government, Vaca-Daza has led the propaganda attacks against Morales and kickstarted the #SOSBolivia hashtag to beg the imperialist nations for intervention, exploiting the forest fires for this purpose. Opposition candidate Carlos Mesa, who received $10 million from the US earlier this year, has also echoed these calls for outside ‘aid’.

Extinction Rebellion has eagerly responded to these calls by staging protests outside Bolivian embassies across Europe. Wordley’s article also quotes El Deber, one of the largest pro-opposition media outlets in Bolivia. While Wordley says her research was ‘unfunded work’ performed out of interest, she is producing regime change propaganda in the imperialist nations for free; those sources she cites and promotes are being handsomely rewarded by Washington.

The truth is less convenient for the interests of imperialism. For several weeks, there has been an increase in the fires in the Amazon rainforest, primarily in Brazil but which spilled over the border into Bolivia in early August. In response to this, Morales hired a Boeing 747 Supertanker, which in the past week has discharged 979,000 of the 1,892,330 litres of water which have been dropped on affected areas. In addition, the government’s efforts have included five helicopters dropping 873,720 litres, and contracted aircraft dropping a further 39,610 litres. The UN has recognised and praised these efforts due to ‘the large forces mobilised and Morales’ calls for a region-wide response’. Bolivia’s government reported that by the end of August ‘85% of the fires had been extinguished in around eight days of its operations’ (Grayzone, 29 August 2019). Morales also announced an ‘ecological pause’, which means that in fire-affected areas, land sales are prohibited so that agribusiness cannot profit from the fires and the damage caused – by using the newly cleared land for cattle grazing – and won’t be tempted to deliberately burn more forest, and so that once the fires have been extinguished a program of reforestation rather than exploitation can commence.

While it is true that earlier this year the Bolivian government allowed small farmers to burn some areas of forest land to clear way for crop production, saying ‘If small families don’t set fires, what are they going to live on?’, a NASA report has confirmed that the fires are concentrated overwhelmingly in Brazil. Wordley’s article ignores that of the one million hectares that have been consumed by fire in Bolivia since the beginning of August, less than a quarter has been rainforest, and that these figures are on a par with or less than the figures for previous years. The total area burnt in 2004 was 4.8 million hectares (more than twice the figure for 2019 so far) and in 2010 it was 6.1 million (including 2.7 million in forests alone, outstripping the total for all land types burnt this year) (Reporte: Incendios y Quemas en Bolivia).

As we reported in FRFI 271, “in 2011 [Bolivia] became the first country in the world to introduce legal protections for the environment on a par with rights protecting human beings.” In June 2015, Morales called capitalism ‘a cancer for Mother Earth’. Bolivia has only recently managed to throw off the hawk-like claws of the IMF and is in no hurry to hand its sovereignty back to the US in exchange for so-called aid. Earlier in 2019, in response to flash flooding, Bolivian Vice President Alvaro García Lineras said ‘Bolivia has the resources…the era of begging [to outsiders] has passed, leave that to Carlos Mesa’. As we saw in Haiti in 2010, international emergency aid is militarisation and occupation under another name.

Across Latin America, capitalism cannot allow even progressive social democratic governments like Bolivia’s to thrive, and with the presidential election approaching, these will only be the first of many vicious attacks against Morales and MAS.