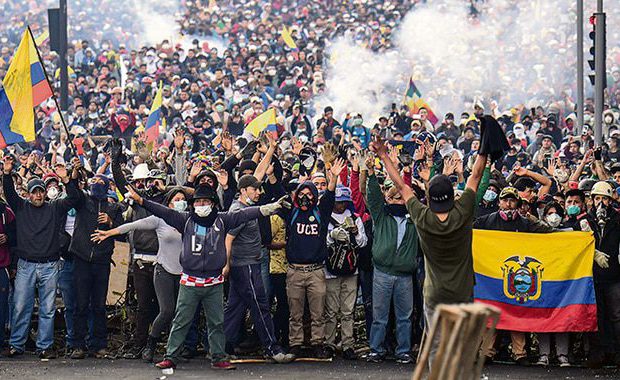 As its very name suggests, Ecuador is geographically located in the middle of the world. And now, from all appearances, neoliberalism has decided to carry out its end-of-the-world maneuvers in this country. That is perhaps the reason it is coming to the realization that the Ecuadorean people is a tough, if not impossible obstacle to overcome. As everyone knows these days, neoliberalism’s deep interconnectedness with the interests of finance capital makes it the most antisocial version of global capitalism. It recognizes no other freedom than economic freedom, and so finds it easy to sacrifice all other freedoms. The specificity of economic freedom lies in the fact that it is exercised strictly on the basis of one’s economic power to exercise it. This, in turn, always entails a measure of asymmetrical imposition upon those social groups that are lacking in power and a measure of brutal violence upon those who have no power at all, which happens to be the vast majority of the world’s impoverished population. The imposition and the violence lead invariably to the transfer of wealth from the poor to the rich (via the state’s meager policies of social protection) and the plundering of natural resources as well as economic assets whenever available.

The International Monetary Fund is the agent in charge of legalizing this transfer, which is viewed by the people as sheer theft and makes itself felt in the violent austerity policies imposed by finance capitalism. The theft is so blatant that the amount of the loans is almost always as high as the publicly reported advantages granted to the international lenders and to the large multinationals connected to them. The most recent instances of this process include Greece and Portugal (2011-2015), Argentina, Brazil, and many African countries.

The current situation in Ecuador is the height of neoliberalism’s destructive will. In order to safeguard the right to legal theft on the part both of creditors and multinationals, the country was put to fire and sword, a state of emergency was declared and readily legitimized by the constitutional court, the Armed Forces – trained by the infamous US Army School of the Americas (whose current name erases history while pursuing the same goals) – were mobilized, so they could practice in the fight against the domestic enemies, i.e., the impoverished majorities, protesters were murdered and injured, and hundreds of children were caused to disappear. It was a maximalist, end-of-the-world strategy, only too ready to raze the country if that’s what it takes to enforce the will of the empire and of the local elites at its service.

The real tragedy in all this is that, during the first decade of this century, Ecuador was the country of hope. It was my great pleasure to be a consultant in the drafting of Ecuador’s 2008 Constitution, one of the most progressive Constitutions in the world and the first ever to enshrine the rights of nature among its articles, thereby offering an alternative to capitalist development. Such alternative rested on the principles of harmony with nature and of reciprocity followed since times immemorial by the indigenous peoples, their approach to life so foreign to Western logic that it had to be conveyed in its language of origin, Quechua, as Sumak Kawsay, awkwardly translated as good living. The following years were marked by innovative experimentation and high expectations, especially for the indigenous peoples, who, mostly since 1990, had fought for the recognition of their rights, respect for their ways of life and for a dignified existence as survivors of the great colonial genocide of the modern age, perpetuated to this day by the new colonialism and racism that for decades has characterized the political parties on both the right and left. The president of the Republic at the time was Rafael Correa. A great communicator, albeit one not too deeply rooted in the social movements, he had an antiimperialist discourse, was always controversial in his positions, and had a low tolerance for dissent in his own political ranks. But he did a remarkable job of renegotiating the foreign debt and effecting social redistribution, even if these efforts were somewhat misguided and perhaps unsustainable, and that for two main reasons. On the one hand, it was difficult for him to see the indigenous peoples as more than poor people, their collective rights, culture and history being of little import; social redistribution meant control by the state and the destruction of indigenous self-government autonomy – a guarantee that dated at least as far back as the 1998 Constitution; and it didn’t take long for him to refine his demonizing of the indigenous leaders. On the other hand, he ran afoul of the Constitution and invoked financial difficulties to justify his embracing the neoextractivist, capitalist development model (based on the extraction of natural resources, especially oil), although he broke with tradition in showing a preference for Chinese rather than US investors. Because of his developmentalism and his fierce hostility to the indigenous leaders, over the last few years Correa has been abandoned by a large part of the Ecuadorean left. I myself have been a critic of Correa. But I never shared the excesses of those sectors of the left who, with the blessing of the European ecological left, went as far as calling him an authoritarian and ultra-rightist leader. These days they are faced with a reality check about the true meaning of the extreme right in Ecuador and across the subcontinent. Rafael Correa stayed in power from 2007 to 2017 and was succeeded by president Lenin Moreno, who had served as Correa’s vice-president for several years. At first it seemed that the only change would be one of style, not the substance of government. But those familiar with Moreno’s background should pay better attention. No one seemed to notice that the Moreno-backed legal persecution of Correa on charges of alleged corruption was just another version of the new US strategy aimed at neutralizing rulers that challenge the interests of US companies, especially as far as oil is concerned. Enter the alleged fight against corruption, as was also the case with Lula da Silva and Cristina Kirchner, among many others. Little by little, Moreno revealed his true goal, which was to realign Ecuador with US interests, in an alliance that culminated with the agreement signed with the IMF. The 1 October decree with austerity measures – the so-called paquetazo – spells profound brutality for low-income families, which constitute the vast majority of the Ecuadorian people.

The tragic trajectory of the IMF recipes is only too well known. They yield no good results except for the investors, while impoverishing the vast majorities. In spite of that, or perhaps because of it, they continue to be used, and each time they are heralded as the only alternative left to save the country. It is not surprising that the IMF is heedless of the ruinous social consequences of its recipes, because capitalism cannot be required to extend its philanthropy beyond its own interests (for which reason it does not qualify as real philanthropy). What is surprising is that, during the first twelve days of the crisis, Lenin Moreno seems to have forgotten how strong the resistance of the indigenous peoples can be, a resistance learned over the centuries and which has overthrown three presidents since 1990, with Moreno possibly the next in line. Most tragic of all, for the people of Ecuador, is the fact that the overthrowing of past presidents (in 1997, 2000 and 2005) was much less violent than what lay in store for the next one. The timid statement by the UN High Commissioner for Human Rights, whose inability to stand for human rights with total autonomy is well known, is a sign of the authoritarian times in which we live. Twelve days into the fight, Moreno finally gave in. He lifted Decree 883, which had established the austerity measures (first and foremost, the virtual doubling of the price of fuel). It is a backing down – and a poorly disguised one at that – for the sake of political survival. Decree 894 begins with a justification for repealing decree 883 – for technical reasons that basically consist in the impossibility of enforcing it due to resistance on the part of the people – and goes on to offer reasons having to do with the establishment of social peace and harmony and the desire to negotiate the new measures with the relevant social organizations. Article 2 of the new decree stipulates that the fuel subsidies will be restored and only made more rational and targeted, so that they do not end up benefiting those who do not need them or use them for contraband. Had that been the objective to begin with, the country would not have reacted the way it did.

With two years to go until the end of his term, Moreno is aware that his backing down is a personal defeat that will cost him dearly in the near future. Everyone will remember the arrogance of his professed purpose to go ahead with austerity at whatever cost. The rhetoric was directed at the IMF, not the people of Ecuador. With its pathetic and supposedly emotional undertones, the new rhetoric is directed at the Ecuadorian people and amounts to little more than a surrender speech. In fact, the main defeat is not Lenin Moreno’s, but rather a defeat of the IMF and its austerity policies. The final maneuvers were aborted, as military slang has it. As they were in Argentina, with other countries to follow. The IMF’s difficulties are a reflection of the decline of neoliberalism in the second decade of this century. Now that they have a better grasp of where Moreno is coming from, the Ecuadorian people are not expected to let up in the new phase of their struggle – a struggle, moreover, with which they are teaching the world a lesson: unjust power, no matter how strong, always comes with a vulnerable spot, a measure of injustice, and peaceful and organized resistance against it. 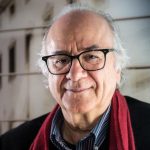