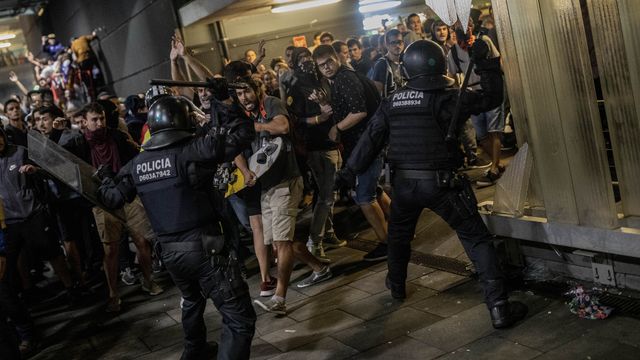 Madrid’s sentencing of a dozen Catalan nationalists Monday to a decade in jail for sedition, followed by threats to impose a state of emergency on Catalonia after a police crackdown on mass protests, marks a major step towards dictatorship, not only in Spain but across Europe. The ruling on Monday is an infamous and illegitimate verdict by a court that is discredited by its recent statements of support for fascist rule.

The defendants, led by former Catalan regional vice-premier Oriol Junqueras, called for peaceful protests leading up to a peaceful Catalan independence referendum on October 1, 2017. Spanish paramilitary police mounted a violent crackdown on voters in that referendum, wounding over 1,000 people as voters responded to police beatings at polling stations with mass civil disobedience.

Turning reality on its head, the court claimed that this constituted not illegitimate state violence against the population, but a violent popular uprising against a legitimate state authority—and that Junqueras and others were therefore guilty of sedition for inciting it.

Amid growing calls for a general strike, a confrontation is brewing between the working class and the police state that is emerging in Spain and across Europe.

After protests again broke out Tuesday night in Barcelona against the jail sentences, Socialist Party (PSOE) Prime Minister Pedro Sánchez declared that he “ruled out no scenario” for his government’s response, as he met leaders of Spain’s major parliamentary parties. Led by the newly formed, fascistic Vox party, these parties are issuing various demands: to invoke Article 155 of the Spanish constitution to suspend the elected Catalan regional government, or to mobilize the army.

It is an elementary task posed to workers across Spain and internationally to demand the liberation of the Catalan nationalist political prisoners and defend workers and youth in Catalonia against the threat of military repression and authoritarian rule from Madrid.

Advancing the demand to free Catalan nationalist prisoners does not imply any support for their regressive program of dividing the working class in Spain by forming an independent capitalist republic in Catalonia, or for their record of imposing social austerity on Catalan workers. Broad popular distrust of Catalan secessionism in Spain, including among a narrow majority of Catalans, is legitimate and politically justified. But their arrest is an integral part of a fascistic campaign whose principal targets are the Spanish and international working class.

By blaming protesters rather than Spanish police for the crackdown in Catalonia, the Supreme Court ruling hands the state a weapon to eviscerate fundamental democratic rights. If its grotesque and reactionary argument were to become accepted, police would need only break a nightstick over the head of a striker on a picket line, or a student occupying a university, to declare them guilty of violent rebellion against the state and hand them long prison sentences. Constitutionally protected rights to strike and to protest would be a dead letter.

The imprisonment of the Catalan nationalists is inseparably linked to a relentless campaign in the ruling class since the Catalan referendum to promote Vox and rehabilitate fascism. In June, as the Supreme Court was discussing this ruling, it briefly blocked a proposed exhumation of fascist dictator Francisco Franco, arguing that he was the legitimate “head of state from 1 October 1936 until his death in November 1975.” It thus ruled that Franco’s 1 October 1936 self-proclamation as head-of-state, four months after his fascist coup launched the Spanish Civil War, was legitimate.

The Spanish Civil War devastated cities across Spain and led to the murder of 200,000 left-wing workers and intellectuals and the detention of 400,000 people in concentration camps. Yet the Supreme Court ruled that it would be “extraordinarily harmful” to the public interest if there was not a more positive understanding of “the significance of don Francisco Franco.”

The legitimization of Francoism inevitably sharpens the Spanish state’s conflicts with Catalonia. It must be recalled that after Franco’s victory in the Spanish civil war and the Nazi occupation of France in 1940, the Nazi Gestapo handed over exiled Catalan nationalist leader Lluis Companys for execution by the Spanish fascists.

The EU and all its member states are directly implicated in the plotting of the Spanish ruling class. Junqueras, who was elected to the European Parliament from prison, could claim legal immunity as a euro-deputy. However, when the EU Justice Tribunal scheduled a hearing to determine whether Junqueras would enjoy this immunity, not a single EU member state presented arguments to the court. They all consciously, albeit tacitly, supported the Spanish bourgeoisie’s moves to legitimize fascism and scrap basic democratic rights.

The ruling in Catalonia is only the sharpest expression of the drive to undermine democratic rights and suppress protest across the European Union (EU), amid a resurgence of strikes and political protests against EU policies.

In Britain, the last week has seen the arrest of over 1,600 peaceful climate protesters in London and the Metropolitan Police imposing a citywide ban on demonstrations.

In France, where hated President Emmanuel Macron hailed fascist dictator Philippe Pétain as he launched mass arrests of “yellow vest” protesters against social inequality, police have repeatedly beaten peaceful protesters and then arrested those trying to defend themselves. The case of Christian Dettinger, a former boxer sentenced to 30 months in jail for punching a cop’s riot shield while protecting a female protester, is notorious. This followed two years of a state of emergency under which democratic rights were suspended.

In Germany, the neofascist Alternative for Germany’s (AfD) rise to become the main opposition party, in the face of mass protests, is the most dangerous manifestation of the growth of neofascism in Europe.

Nearly three decades after the Stalinist dissolution of the Soviet Union led bourgeois intellectuals to proclaim the “End of History,” the death of socialism and the eternal triumph of liberal democracy, the ruling classes throughout Europe are once again turning toward dictatorship. Significantly, the reemergence of the fascistic tendencies in the Spanish state machine takes place under the aegis of the “liberal” social democrat, Sánchez.

No struggle to defend even the most basic rights is possible within the framework of the parties of the affluent upper-middle class, such as the Stalinist and Pabloite Podemos party. Podemos has worked consistently to demobilize and strangle political opposition in Spain to Madrid’s fascistic campaign targeting Catalonia since 2017. It has called not a single mass protest of its five million voters, in line with the Stalinist and social-democratic trade unions, which have refused to mount solidarity actions in defense of workers targeted for repression in Catalonia.

Instead, Podemos is appealing to the PSOE to form a government alliance, even as it leads the campaign of repression in Catalonia. Podemos General Secretary Pablo Iglesias, who pledged “full loyalty” on matters of state to Sánchez during failed government talks earlier this year, declared after the Catalan verdict that, despite his purported distaste for the decision, “everyone will have to respect the law and accept the verdict.”

Fighting the turn by the ruling classes toward dictatorship and fascism requires a break with these bankrupt forces and a turn to the international working class.

Workers in Catalonia fighting to defend their social and democratic rights must appeal to their class brothers and sisters throughout Spain, and Europe as a whole, in a common struggle for the socialist transformation of society and the fight for the United Socialist States of Europe. This is inseparable from the struggle to build sections of the International Committee of the Fourth International (ICFI) in Europe and throughout the world.