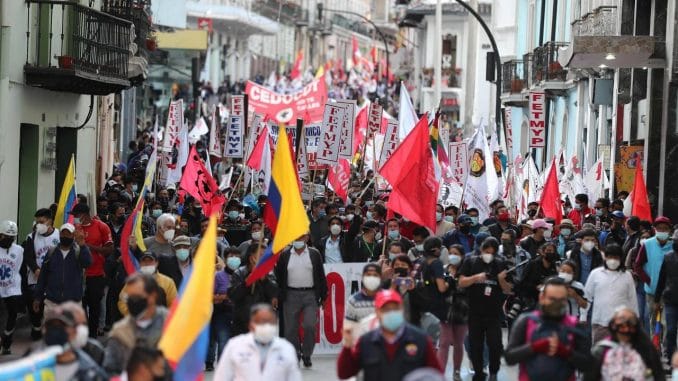 The Unitary Workers’ Front (FUT) called on the population to protest against Ecuador’s President Guillermo Lasso, who has not listened to citizen demands related to the increase in fuel prices.

In Quito, protesters will gather at the building of the Ecuadorian Social Security Institute (IESS) at 4pm local time to march towards the Santo Domingo Square. From the early hours of the morning, however, citizens blocked some roads in the country.

The Confederation of Indigenous Nationalities of Ecuador (CONAIE) President Leonidas Iza said that the grassroots militants will not fall for the provocations of violence generated by the Police. However, they will not accept harassment of any kind. Therefore, the indigenous leader asked the President to lower the levels of aggression and promote dialogue.

The National Union of Educators (UNE) will also join the protests, since modifications to the Intercultural Education Law (LOEI) have not been revisited as the Constitutional Court ruled.

In Ecuador the peasants and farmers have come out to protest. They leave us these spectacular images in the middle of the fight. https://t.co/bhp93S54eV

The Rice Growers Association President Luis Pilalto said that his organization “has nothing to talk with Agriculture Minister” because its demands have not been heard for months. Under the current scenario, he stressed, the only viable option is to take to the streets so that rice prices allow farmers to recover their production costs.

Franklin Torres, the president of the National Federation of Banana Producers (FENABE), denounced the breach of the Banana Act, which the authorities should enforce to prevent international traders from exploiting producers.

Milk producers and taxi drivers also joined the protests against Lasso. So far, however, his response to social unrest has been to reinforce the presence of the Police and the Army in the largest cities and rural areas, especially in those places where the 2019 demonstrations were massive and strong.

Featured image: Demonstrators participate in a day of protests against the reforms carried out by the Government of President Guillermo Lasso today, in Quito (Ecuador). EFE / José Jácome.