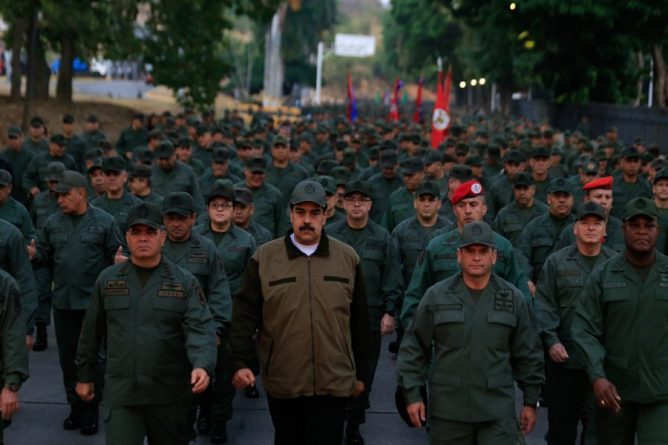 Thursday, the President of the Bolivarian Republic of Venezuela, Nicolás Maduro, called on the Bolivarian National Armed Forces (FANB) for cohesion, to the maximum unity around the peace and in the defense of the Constitution and Venezuelan democracy, with maximum loyalty to the country of Simón Bolívar. His exhortation was broadcast on a radio and television network on Thursday, during a salutation addressed to military personnel and the Military High Command in Fort Tiuna, Caracas, at the beginning of a working day with the military sector.

“Before the world this FANB has to give a historical lesson at this time that in Venezuela there is a consistent, loyal, united, Armed Forces, united as never before defeating attempted coup plotters who sell themselves to Washington dollars”, to maintain the maxim morale in these times of siege and interventionist threats against the nation by the US empire, said the Head of State.

The National President stressed the importance of the FANB showing itself to the people, increasingly disciplined and subordinated to constitutional interests, “increasingly obedient to principles and values, in their morals, in their discipline, as an Armed Forces peace, democratic, constitutional, Bolivarian, increasingly socialist, anti-imperialist. No one can be afraid, it is time to defend the right to peace, “he insisted.

His exhortation was also expressed by the Commander in Chief of the FANB two days after the coup attempt by the far right with the deceptive manipulation of a small group of military personnel and the consent of the United States Government.

President Maduro signified the advances in the new strategic conception of the Venezuelan military doctrine, Latin Americanism and praised the legacy of patriotic loyalty of the commander Hugo Chávez that is more in force facing this scenario of coup.

“Maximum morale to disarm any traitor, any golpista. With the banner held high and a single slogan: ‘Always loyal, never traitors’. So I call the superior General Staff, General in Chief Vladimir Padrino López; Admiral in Chief Remigio Ceballos; General commander of the Army, Aviation, Navy, Bolivarian National Guard, Bolivarian National Militia, Chief of Staff of the CEO, official gentlemen, soldiers and soldiers of the country: march for military loyalty to the fatherland from Bolívar, we started today, May 2,” he said.

In his address to the FANB, President Maduro highlighted the massive participation of the revolutionary people on May 1 in the great march for International Workers’ Day, which he described as monumental again, in which he warned about the intentions of the coup leaders. However, he recalled that 80% of the officers and soldiers present left the opposing coup leaders alone after realizing that they were deceptively taken to the incident.

“They left when they saw the faces of the coup plotters. They left loyally singing revolutionary slogans to their natural military units,” he said.