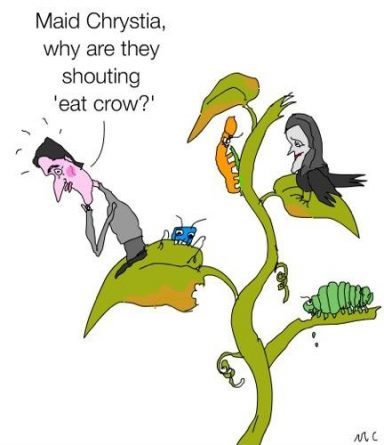 We left off our saga of Justin and the Beanstalk with the young wunderkind’s triumph over the giant ogre (Prime Minister Harper), as he swept away the broken democratic shards littering his kingdom in the sky, to the cries of joy from the Canadian peasants. Justin began energetically fulfilling at least some of his many promises. He rejoined the Paris Agreement on Climate. Scientists breathed a sigh of relief as their withered vines received nourishment after 10 years of drought, and the muzzle on their right to speak about the perils of global warming was removed.

Justin’s first budget had goodies for just about everyone, including a (small) increase on taxes on the rich. His finance minister Morneau proposed a $2-billion Low Carbon Economy Fund to help the provinces meet Canada’s climate change targets to reduce the heat-trapping greenhouse gases so beloved by the ogre’s friends in Alberta, with plans for a carbon tax to allow ‘green growth’ (surely an oxymoron, but at least green is no longer a bad word).

To help alleviate the plight of Canada’s natives, Justin promised $8.4 billion in education, infrastructure, training, and a national inquiry into Missing and Murdered Indigenous Women and Girls. He appointed fair damsels (regardless of experience) to 50% of his cabinet seats, declaring himself a “proud feminist” living in an era of equality. This included LGBTQIA,* as he made attendance at their summer parades a new ritual, giving them pride of place in his Valhalla.

Justin moved quickly to legalize a much prized weed, blessed with magical THC, beloved of youth, now accepted by less cool elders. This will no doubt be his one undisputed legacy of spreading joy to one and all.

But his early promise as a new leader with new ideas quickly lost its sheen. After 5 years, the weed is still not available. It turned out Justin legalized it more for the ogre’s allies, the corporations. Peasants are limited to 4 plants, not enough for normal use, farmers included. Soon corporate growers with such flashy names as Tweed, Maricann Inc., Peace Naturals Project Inc. and WeedMD Rx Inc. took the lead, building massive, high security factories, as provinces squabbled with Justin about how to regulate and tax this new wonder drug. So much for the peasants, who could have grown the plant as plants should be grown, in sunlight, under open skies, using no ‘green growth’, just Mother Nature. Maybe making a small income from their hard work.

For the real Canadians, Canada’s natives, there was little to cheer, with only window dressing on the plight of women, and no improvement in entrenched racism or the ongoing despoliation of their lands. Justin’s worst decision was to continue the ogre’s slavish devotion to the tarsands in Alberta, which rape and pillage Mother Nature. (Hey – I thought he was supposed to protect us!)

Justin even paid the Kinder Morgan Trans Mountain pipeline shareholders, the ogre’s allies, $4.b, much to their joy. They could see that it was not a good idea, even for nongreen growth. So the peasants quickly joined forces with the natives from the Atlantic to the Pacific to save not only native women from rape and pillage, but all Canadians, and their Mother Earth. Even elite judges joined the peasants and natives, as the Federal Court of Appeal overturned the government’s approval of the expansion project, citing that it did not sufficiently fulfill its constitutional duties to consult local First Nations groups, and because increased tanker traffic would imperil the endangered orca whales in the Pacific Ocean.

Justin betrayed even his youthful friends, interested in ending the ogre’s ‘best friend’ relationship with the ogre in Palestine, where the peasants suffer far more than their cousins in Canada. One of his first royal edicts was to rubber stamp the ogre’s motion targeting the Boycott, Divestment and Sanctions (BDS) campaign against Israel, the brainchild of Canada’s idealist youth, labelling these erstwhile allies anti-semites. He also signed on to the ogre’s $15b arms sale to the world’s worst ogre, the Saudi prince bin Salman, who gleefully murdered and dismembered a pesky journalist, shocking the world’s peasants, but forgiven by our human rights champion, eager to produce machines of death — anything — to keep the petrodollars rolling in. This penchant to help the ogre’s corporate friends led to a scandal which peaked in 2019, the Lavalin Affair, a cesspit of bribery and fraud. Justin dismissed his minister of justice, a native woman, Jody Wilson-Raybould, for trying to be honest. Whew!

Meanwhile, little ogres have sprung up in Alberta and Ontario, which, along with one in Saskatchewan, were determined to scuttle Justin’s carbon tax, his green centrepiece, while gutting any hated environmental support they can find in their provincial fiefdoms.

Justin’s record abroad is just as disappointing as his domestic bungling. His powerful Maid Chrystia in love and war

Maid Chrystia has been barnstorming around the world, wrestling with ogre Trump over NAFTA free trade, winning ‘concessions’ (not) which gutted Canadian milk farmers.

She squawks at every chance at her personal ogre, the dastardly Vlad (Putin) over Ukraine and Crimea, and his evil Venezuelan henchman — with no effect, but it sure is fun! She pecked timidly at bigtime ogre bin Salman over his persecution of female crows — with no effect, but it is the politically correct thing to do … The list is long and her successes at best a mirage.

When bin Salman orchestrated the spectacular medieval torture and execution ritual of journalist Khashoggi, Justin and Maid Chrystia told their ogre friend (who owes them $4.5b) ‘this was not at all nice,’ whispering, ‘but we will turn a blind eye, just this once.’

As for the great anti-ogre forces China and Russia, Justin told them they were the ogres, in keeping with instructions from the great white ogre to the south of Canada. Even if they are a tad ogrish, Justin and Chrystia’s shrill falsetto harping merely makes them chuckle. When Justin arrested Chinese Canadian Huawei Chief Financial Officer Meng Wanzhou, intending to hand her over to ogre Trump to be devoured as a sacrificial offering to American liberty, the Chinese dragon flashed its fiery breath, arresting and even sentencing to death several Canadian peasants unwittingly caught in the crossfire

Promising a peaceful foreign policy, to end defeated ogre Harper’s sabre-rattling in Afghanistan, Syria, and Africa, instead Canadians were given the opposite, with a new NATO mission in Iraq and troops sent to Latvia (!), solemnly claiming Russia was a threat to plucky Latvia (given its independence by the Soviet Union in 1991). This is in stark contrast to Justin’s father’s clear policy of peaceful coexistence with the then-Soviet Union. Again, in contrast to father Pierre Elliot, Justin refused to support the worldwide campaign for nuclear disarmament (WHY?).

Oh yes, 25,000 Syrian refugees. That, along with Maui wowie, will be the beanstalker’s positive legacy. Multicultural munchies for all!

As for ‘peacekeeping’, Canadian troops were sent to Mali to police a stand-off with al-Qaeda insurgents, but it is not the peacekeeping mission Trudeau promised his peasantry. Despite pledging up to 600 peacekeepers and 200 police, Trudeau has delivered less than half that number of peacekeepers and no civilian police officers.

With the deaths of 177 peacekeepers in Mali — 22 of whom were killed in 2018 alone — Mali is the most dangerous ‘peacekeeping’ mission in UN history. Justin (wisely, for once) refused to extend the mission beyond 12 months. But what was the point in the first place? That’s hardly enough time to get over jetlag.

We haven’t even got to Justin’s physical deformity, being mysteriously born with two left feet. During a visit to India, Trudeau dressed as if for Halloween, and for his party prank sent a formal dinner invitation to Jaspal Atwal, an attempted murderer from a Sikh organization that India ranks as a terrorist group. Although the invite was eventually rescinded, it certainly made a lasting impression on his Indian counterpart, Narendra Modi.

On another cringe-worthy occasion, the self-proclaimed “proud feminist” interrupted a young woman at a political event for using the term “mankind,” explaining pedantically that the correct nomenclature was “peoplekind.” In the era of social media, where such gaffs quickly go viral, Justin has sadly developed a reputation for his “silly walks” rather than any real successes.

As elections loom in 2019, Justin and his realm look to be in very bad shape. He appears to becoming a reincarnation of the ogre. Ogre Harper has watched the drama (farce?) from the sidelines, his image actually improving as Justin’s budget explodes, as his heavenly realm is once again threatened by the capitalist ogredom through his lack of experience, his lack of wisdom. Can we please start over?

Will Justin’s Liberals go crashing down, like their friends in Ontario and Alberta? Will Canada continue to be laughed at as a junior partner to ogres US and Israel, bereft of its seat at the UN Security Council because of its unprincipled kingship? Will Justin be fed his pet crow Maid Chrystia at the election day smorgasbord in August?

Justin’s beanstalk is battered, wilted, in danger of collapsing. It seems the ‘proud feminist’ could use a strong dose of testosterone.