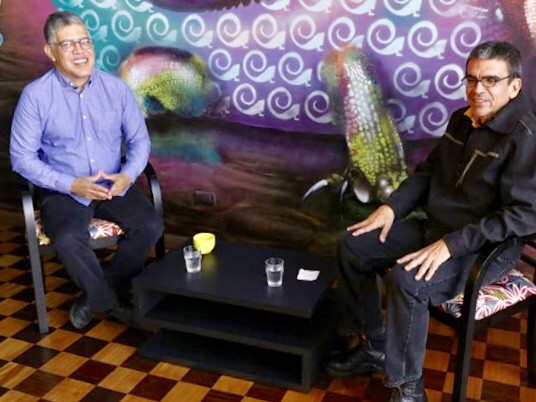 Elías Jaua Milano has held numerous responsibilities both in the government of Commander Hugo Chávez and of Nicolás Maduro. A few months ago he left the Minister of Education. Since then it is related to dissident Chavismo currents. In the exclusive interview he gave to La IguanaTV he outlined his position: loyalty to the revolutionary process, but with deep criticism of the direction it has taken.

Quoting a part of President Maduro’s speech in his oath before the Supreme Court of Justice, Jaua said that “more dangerous than imperialism are those corrupt sectors that take advantage of the nobility, greatness and heroism of the Venezuelan people.”

Next, a version of the dialogue that Jaua (Caucagua, 1969) had with the journalist Clodovaldo Hernández:

-What balance do you make of the swearing in of President Nicolás Maduro for his second term? What scenario do they pose?

-It was demonstrated that this January 10 was not a terminal date. Simply, the president who chose the majority of the electors and the electors assumed his mandate. In view of the situation of contempt in which the National Assembly finds itself, it did so before the Supreme Court of Justice. Now, it is a starting point of a complex stage. Internationally, we have begun the long road of isolation from the United States and a group of governments of the European Union and Latin America, and we have to learn to live with that. It is a situation that will not vary in the short term. Venezuela must prepare to live with the consequences of diplomatic, political and economic aggression for a long period. That forces us to start a new stage in the internal level. The country, facing an isolation like the one they try to apply, has the great task of developing the national production. It is a matter in which the private sector must be involved, but also small and medium producers, cooperatives, communes, peasants, family entrepreneurs. It has to be a great crusade for national production. Everyone who can produce must be incorporated. It is the only way a country can overcome a situation of isolation. Cuba is an example, Iran is another, they achieved an internal development, even in the scientific and technological level, in the midst of a long blockade, of four decades and with permanent military aggressions. These are the great challenges for the year 2019. On the other hand, as President Nicolás Maduro said, and those of us who know him know that he said it from the soul, it is impossible to preserve independence and raise national production if we do not dismantled for good the mafia system that has occupied the national economy, a concert of corrupt officials and businessmen that impede any development plan.

-The Chavismo, when faced with situations like this, got agglutinated, becomes a single block, but there is still an internal controversy: Where does this controversy point at?

-Well, it points out that the Revolution could not be the space for groups of political and economic power to be formed that put their commercial, chrematistic interests before the interests of the nation and the Revolution. It is not fair, it is not ethical, it is not even human that while the immense majority of the people are making a great sacrifice to sustain national independence, to defend themselves against this onslaught, this aggression, and have done so at the expense of the tranquility of his daily life, there are officials and businessmen playing to the illicit accumulation of wealth, many times clothed under the banners of socialism, the Revolution and anti-imperialism. That is why President Maduro, in his inauguration speech, was emphatic about something I share: more dangerous than imperialism are those corrupt sectors that take advantage of the nobility, greatness and heroism of the Venezuelan people.

– In a controversial interview with the BBC in London, you stated that one of the mistakes of the Revolution had been not to dismantle the corrupt structures. You were criticized because the crimes of corruption are intentional, even of cunning, who commits them is aware of what they do. Is it a mistake or is it something else?

–In that effort to live in isolation in this very delicate situation that is living the country, it seems to be important to re-establish dialogue with the opposition, at least with the non-radicalized sector. But, in view of these recent events, does that sector have any specific weight within the opposition or is it dominated by the most radical?

-Sadly, the opposition is dominated by the government of the United States and by that of Bogotá. They do not have their own leadership or the hegemony of what should be an opposition project. But a central issue to advance in the breaking of the isolation and, above all, to advance in solutions to the problem of the external debt and, therefore, of the access to new financings, happens that the National Assembly, as Legislative Power, enters into functioning. That can be in two ways. The first is that of a political agreement as it was prefigured in the Dominican Republic in 2018. The other is that, given the country’s inability to resolve this sensitive issue, a new election of the AN is being convened. The ideal would be the political agreement, but if it is not achieved, I believe that the National Constituent Assembly is empowered to advance in the calling of these elections, with all the guarantees of the case. I hope the opposition does not abstain from participating. Hopefully that issue can be solved this year, in favor of the country and the tranquility of the Venezuelan family.

–The economic recovery takes us to the peasant issue. You, who were Minister of Agriculture and Lands and who, moreover, are pointed out to you as one of those who were behind the Peasant March last year, how do you see the integration of popular power, of the communes, into national production?

-Well, first of all I must say that I was not “behind” the Peasant March, but “next” to the Peasant March. That was an initiative of the peasantry tired of so much outrage, of so much exclusion at the different levels of the State, of the restoration or the resurgence of the latifundio with all its load of violence, of classism against the peasant. Always, since I was 13 years old, I have been at the side of the peasants, how can I not be now, after having been Minister of Agriculture and Lands and having executed the agrarian revolution of Comandante Chávez, something that some people do not forgive me for? never? But, the central issue is that it is not only about the peasantry, but also the Indians, the comuneros and the comuneras, the neighborhood movements. A revolution without a people is not a revolution. Even having the best government in the world, you can not say that a revolution is being made. The best government in the world can administer a state well, a revolution gives it, or rather, restitutes it and recognizes the power of the people. I feel that it is important to return to the path we had been following with Comandante Chávez. In many cases, it seems to me that the bureaucracy can solve everything, and when I use this term I mean the Weberian conception of the bureaucracy, as administrator of public affairs. A bureaucracy, however excellent, does not make revolution. The revolution is made by the people, and if we really want to continue the revolutionary path, we have to trust in the people, in the protagonists, in the peasant, in the youth of the neighborhood, in the women, in the Indians, in those who are the sustenance and the center of a process of revolutionary transformation. That’s what I’m talking about when I refer to Chavez’s path, to accompany the people. Although I was protector of Miranda state, I believe that the people do not need to be protected, but to be the subject of the revolution.

Leave the Constitution as it is

–You have raised the possibility that the ANC proposes to ratify, to leave as it is, the Bolivarian National Constitution of 1999. Do you still think that?

-As president of the commission that convened the 2017 Constituent, and that can be found in the thousands of speeches that I gave, I can say that its main objective was to reorder the State to ensure that it guarantees peace in the country. Peace was violated due to a National Assembly in contempt, some of whose members took advantage of parliamentary immunity to promote and even lead terrorist violence in the streets. It was also affected by a General Prosecutor’s Office that allowed those who committed crimes against the public peace to act with impunity. That was the objective with which the constituent process was called. No doubt that was the space to incorporate a set of things and developments that have been taking place. But in my opinion, the Constitution, as it is, is a point of union not only of the Chavism but of the patriots, of the people who, without being Chavista, bet on the independence and peace of Venezuela. Therefore, it would be necessary to value well whether to make a new Constitution or to reform the current one would not, on the contrary, weaken the national unity. Both politically and legally, in accordance with that constituent spirit, it seems to me that the situation of the ANC proposing to maintain the current constitution could perfectly well arise because it has validity and its fundamental principles, ethical and ideological, have become a point of unity of the nation. I see it that way, if I were a constituent, I would raise it within the ANC. As I am not, I pose as a politician, as a sociologist and as a student of politics.

-In any case, the ANC still has many tasks in that of suffocating the political crisis …