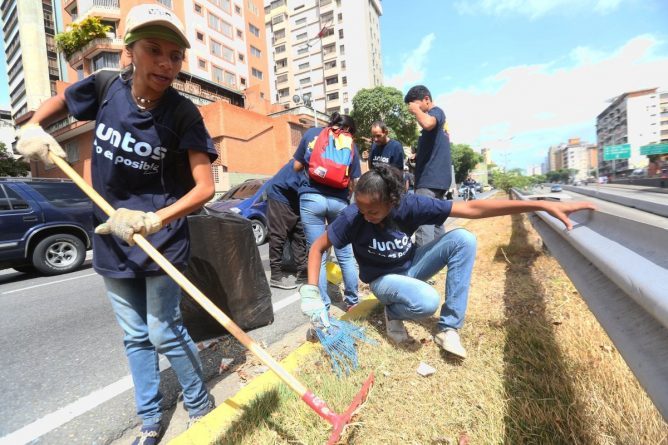 The president of Venezuela, Nicolás Maduro, announced on Monday the creation of the Mission “Venezuela Bella”, which will be articulated with other socialist programs of the Bolivarian Government for the embellishment of the 50 most populated cities in the country. “I want to take the ‘Together Everything is Possible Plan’ to the 50 most populated cities in the country. Therefore, I announce the creation of the Special Mission Venezuela Bella to make them beautiful from now on,” said the head of state before the National Constituent Assembly.

It is a plan of the National Executive that will be developed together with the Great Mission “Barrio Nuevo Barrio Tricolor”, “Chamba Juvenil” and “Cultura Adentro”. It will focus on the embellishment of these spaces with cobblestones, public lighting and the roads in these spaces, among other aspects.

He explained that the Mission “Venezuelan Bella” will arrive in these cities to make them beautiful with the collaboration of the Barrio Nuevo, Barrio Tricolor and Chamba Juvenil missions,” this week.

He assured that this program will be possible to carry out together with the mayors and the governorates, as has already been developed in the capital city, Vargas state and some localities in Miranda state.

In his speech, Maduro also delivered all the premises of the Great Housing Mission Venezuela to the Great Chamba Juvenil Mission to create bakeries, stores, hairdressers, shoe stores, for economic entrepreneurship. “The Great Housing Mission Venezuela, by mandate of our commander built spaces throughout the country. The vast majority of those premises on the ground floor or roofs – within urbanism – (99%) are empty or inoperative”, he said.

“I give all the vacant premises of the Great Housing Mission Venezuela to the Great Chamba Juvenil Mission to create entrepreneurs in the same urbanism of the Great Mission. I give it to you youth, to create bakeries, stores, urban agriculture, hairdressers, shoe stores, butchers, “he said.

He also proposed incorporating a million more young people into this program to reach the 2,000,000 of boys who study and work through this program.

In his speech, Maduro called to reactivate this plan next week and asked to review the progress of this plan on a weekly basis.

Minutes before, he announced that the incorporation of 2,000,000 young people to Chamba Juvenil is one of the goals of social and sustainable development established with the Plan de la Patria 2019-2025 in conjunction with the Sustainable Development Program of the United Nations Organization ( UN).