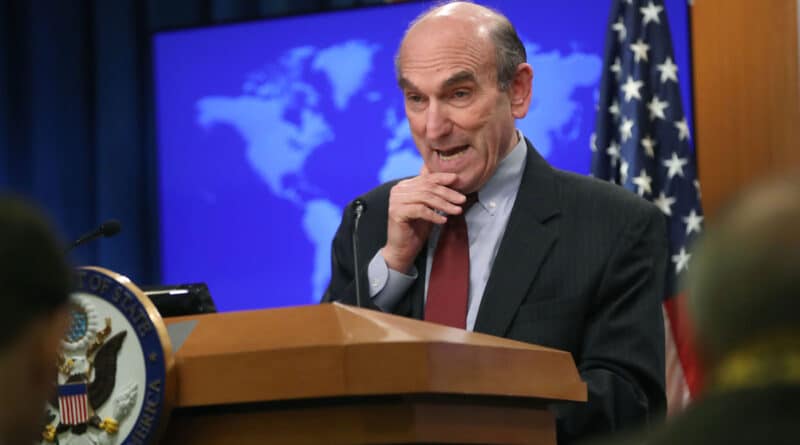 The alleged “interim government” of Juan Guaidó is becoming more and more lonely in its abstentionist stand. The “special envoy” of the United States for Venezuela during Donald Trump’s administration, Elliott Abrams, stressed that the US government should support the Venezuelan opposition if it decides to participate in the regional elections on November 21.

“If the democratic forces in Venezuela decide to participate in the elections, we [the United States] must support them and vigorously organize international pressure to force Maduro to fulfill the promises he has made on electoral conditions,” Abrams said in an interview with The Hill. For US imperial bureaucrats, “electoral conditions” is an euphemism for Maduro/Chavismo not participating and letting the opposition win an election.

Likewise, Abrams expressed that he was in favor of eliminating or reforming the “interim government” of Juan Guaidó. “If the opposition leadership decides to change the form of the interim government, or even end it, we should also support that decision,” he said. However, he rejects the idea of the US administration ​​reestablishing diplomatic relations with the government of President Maduro.

On the other hand, regarding the peaceful path that Venezuela has decided to undertake, starting a series of dialogues between part of the extreme sectors of the Venezuelan opposition and the government of President Nicolás Maduro, the gringo former official, known as “the butcher of Central America” for his role in supporting and financing some of the bloodiest terror regimes in the region, recommends that the Biden administration should continue to tighten the sanctions regime against the Venezuelan people.

“Unless the regime takes significant measures—unless it frees all political prisoners and stops arresting more of them, allows a free press, allows the return of political exiles, and returns democratic political parties to their elected leadership,” said Abrams, in the typical imperial interventionist stand in its endless failed attempts to oust President Maduro.