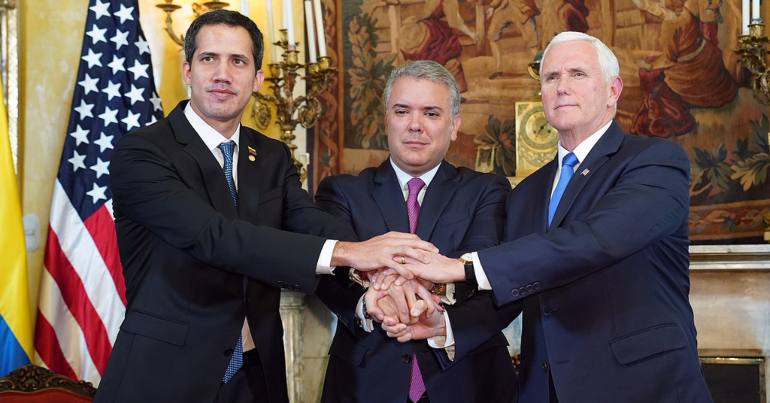 On 3 August, The Canary exposed how Venezuelan opposition figure Juan Guaidó’s UK legal costs were paid with money appropriated from the Venezuelan state.

In an effort to access roughly US$2bn of Venezuelan gold held in the Bank of England, it was reported that Guaidó’s legal team drew on hundreds of thousands of dollars originally seized from the Central Bank of Venezuela in the US.

We can now reveal that this figure is significantly higher. According to official documents, Guaidó and his appointees have given over US$6.5m to powerhouse legal firms as part of a campaign to bleed the Venezuelan state of its foreign assets.

Almost all of this money was sent in a series of instalments to Arnold & Porter Kaye Scholer LLP – the legal firm representing Guaidó in the UK.

The firm appears to be tightly knit with the US foreign policy apparatus, and has over recent years represented a series of right-wing Latin American officials.

Remarkably, the documents also suggest that Guaidó has been paid over half a million dollars from this fund.

Official figures released by Guaidó’s ad-hoc board show that at least US$6,552,512 of these funds have been used “for professional services of lawyers in the care of Assets abroad to be protected and licensing procedures before OFAC”.

Guaidó and his appointees have, in other words, spent millions of looted dollars in an attempt to asset strip the Venezuelan state.

Most of this money was paid to Arnold & Porter Kaye Scholer LLP – the legal firm representing Guaidó in the UK.

RELATED CONTENT: Funds Have Not Been Released: ‘Bank of England Has Frozen Venezuelan Money for Vaccines’ (Venezuelan Gold)

Guaidó and his appointees have also directed roughly US$100m of looted assets towards a secretive“Liberation Fund”. According to AP, opposition lawmakers used the fund during 2020 to “pay themselves $5,000 a month” while providing only $100 a month to doctors and nurses battling the coronavirus (Covid-19) pandemic.

Remarkably, the documents suggest that Guaidó and his appointees have in fact paid Guaidó over half a million dollars since March 2021. The most recent instalment to the ‘Presidency’ was delivered on 19 July 2021, and totalled US$407,702.

Lobbying for Guaidó
A number of questions also arise regarding Guaidó’s legal representation in the UK and its connections to the US foreign policy apparatus.

Eli Whitney Debevoise II, a senior partner at Arnold & Porter who leads on Guaidó’s UK case, has been listed on the US Foreign Agents Registration Act as a lobbyist for the Venezuelan opposition.

In support of the primary registrant [Guaidó], the short-form registrant may engage in political activities on behalf of the foreign principal, including making contact with U.S. government officials concerning the preservation of Venezuela’s assets in the United States, the establishment of a diplomatic presence, and economic and humanitarian assistance.

Proximity to the US foreign policy apparatus
Debevoise II seems well-positioned to provide lobbying services in the US.

According to his LinkedIn account, he’s a member of the Council on Foreign Relations (CFR), which provides “in-person access to world leaders, senior government officials, members of Congress, and prominent thinkers and practitioners”. Elliot Abrams, Donald Trump’s former point-man on Venezuela, is a long-time senior fellow and member of CFR.

Debevoise II also lists the late US official William D. Rogers, who planned US policy in Latin America throughout the 1960s and 1970s, as a mentor. Rogers was a top adviser to Henry Kissinger throughout the mid-1970s; the latter described Rogers as “my friend and, in many ways, my conscience”.

Guaidó’s legal representation in the UK thus appears to enjoy a close proximity to both the US foreign policy apparatus and the Latin American right, and questions regarding conflicts of interest are likely to arise.

Despite his involvement in a damning series of scandals, the UK government reemphasised its support for Guaidó on 18 August.