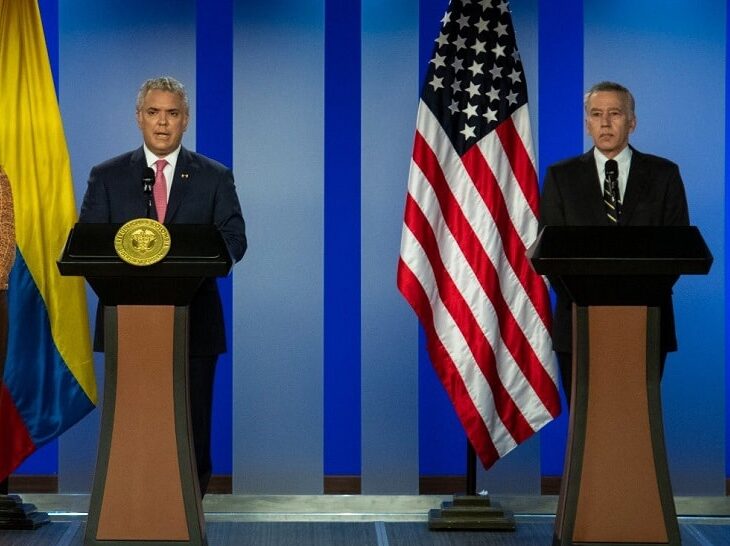 Duque made the announcement alongside the US ambassador to his country. Photo EFE

Caracas, August 21, 2021 (OrinocoTribune.com)—The President of Colombia, Iván Duque, confirmed this Friday, August 20, that his country will provide temporary refuge to Afghans who flee their country while they make “a registration” for their “migratory transfer” to the United States, where they would finally settle.

“Colombia joins the allied countries that are going to offer support to the United States for those nationals of Afghanistan who have helped them for years and who are in the process of making a registration, a migratory transfer to that country; so they will be in Colombia temporarily,” Duque said in a statement.

The announcement raised the alarms in Venezuela, a country accustomed to deal with terrorist and paramilitary attacks coming directly from the US and Colombian governments, like the drone attack with explosives in August 2018, the forced entry of supposedly “humanitarian” aid through the Colombia-Venezuela border at Cucúta in February 2019, and the mercenary incursion know as Operation Gideon in May 2020.

The Taliban seized control of Kabul last Sunday, after fighters of the armed terrorist organization entered the Afghan capital without meeting any resistance from the Afghan military and with almost all the provinces under its control. This prompted the flight of the hitherto Afghan president, Ashraf Ghani, who just days earlier had promised to stop the advance of the Taliban. His masters in Washington, who were announcing for weeks that the Taliban would need at least three months to capture Kabul, have fled too.

The latest move of the Colombian government to temporarily house Afghan refuge seekers has raised alarms in Venezuela, that has been accused for years by the US and Colombia for having links with terrorist organizations without presenting a single relevant proof, because in reality it is Colombia that is the main destabilizing force in Latin America. It could be more than possible that this decision will bring more mercenary attacks and violence against Venezuelans under the disguise of a “humanitarian operation.”

The United States began withdrawing its troops from Afghanistan in May, and now, with the seizure of power by the Taliban, it has been forced to accelerate the evacuation of the remaining Americans in that country and their allies: translators, local workers and other nationals who collaborated with them and now feel abandoned by the failing organization and intelligence services of the US.

Temporary shelter in Colombia
Colombian President Duque, who made the statement together with Washington’s ambassador in Bogotá, Philip Goldberg, and the vice president and foreign affairs minister, Marta Lucía Ramírez, explained that the United States will “defray the costs of the care of these people” and will take measures “to speed up these processes so that the people who receive this temporary shelter will be able to reach the United States quickly to regularize their migratory situation.” This is a clear sign that the US is pressuring its puppet governments around the world to help them to deal with the mess they created in Afghanistan after 40 years of invasion and 20 years of war, death and destruction.

“This statement shows that we are united for the protection of human rights, rights of women, and of course also being with our allies when they need us,” added the Colombian president, while many in Venezuela and around the world question Duque’s real commitment to human rights after months of protests against his government, during which dozens of protesters have been killed, hundreds disappeared, and many more wounded by the police. There is also the issue of the xenophobic public stands of Duque’s government against Venezuelan migrants whom the US and Colombia had encouraged to “escape” from Venezuela in the first place and who are now being treated as “expendables,” irrespective of all the efforts that the US and Colombian authorities adopt to present themselves as the good guys in the story.

The situation of women in Afghanistan after Taliban capture of power has generated enormous concern and alarm among US puppet governments and the mainstream media, since during the previous Taliban regime (1996-2001), installed by the United States itself, women were confined inside their homes, were not allowed to hold jobs, and were not allowed to leave home without being accompanied a man. All this is very similar to the misogynist attitude of the Saudi Arabian kingdom, but in that case the US does not complain because the Saudi regime provides oil to the US, and is a massive weapons market of the US military-industrial complex.

For his part, US Ambassador Goldberg stressed that “the United States remains committed to providing a safe haven for these Afghan citizens,” and thanked Colombia “for providing a temporary place for them as they are on their way to the United States.” However, in reality, many experts inside and outside the US have criticized the way the US authorities have abandoned not only their collaborators in Afghanistan but even US nationals living there, who have not found ways to get a plane out of Afghanistan.

Featured image: Duque made the announcement, with the US ambassador to Colombia, Philip Goldberg, on his side. Photo: EFE