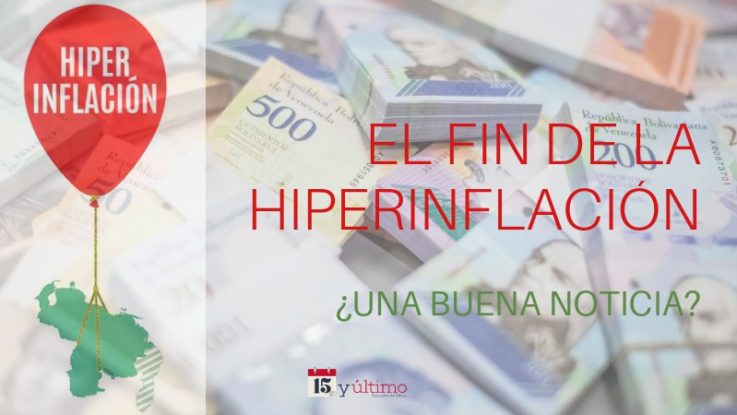 On Wednesday, April 10, an event occurred that for many has gone unnoticed: the National Assembly (NA) announced the end of hyperinflation.

Of course it did it indirectly. It did it by reporting inflation for March of 18.1%. But technically speaking, this means that the 16 month rally of hyperinflation ended, meaning the monthly variation of the Consumer Price Index above 50%.

Of course, the first issue with this is that it is an unofficial index, also published by a body currently in contempt and whose acts are null and void. But two other things also happened: first, since neither the government nor the BCV have published economic indicators since 2015, somehow the closest thing to an official figure is published by the NA. The other thing is that being an organism captured by the most recalcitrant tendencies of the Venezuelan right, currently leading a coup, it is striking that the government is recognized as having lowered the figure of the indicator that has caused the most scandal in the last years.

Whatever the case, the truth is that after the official statistical blackout, in this country it was assumed that we were in hyperinflation at least from November 2017, which was the first time that according to the NA report the National Price Index Consumer (INPC) exceeded 50% per month. In this regard, up to February of this year, 15 consecutive months of hyperinflation were accumulated, since in March the INPC according to the NA was well below the aforementioned 50%.

For didactic purposes, and taking into account the indicators of the NA and those that we have here in “15 y Ultimo”, the evolution of Venezuelan hyperinflation 2017-2019 has been as follows:

The orange column (INPC-AN) accounts for the inflation recorded by the National Assembly’s Economy Committee. The blue column (ICPC-15) is the price index registered by the “15 and Último” publishing team in the city of Caracas and limited to the Basic Food Basket and hygiene and household cleaning products and personnel. As the upward price variation of these items is usually higher, this explains, in part, the difference in the record. But as the news is the INPC of the AN let’s stay with this indicator.

In our opinion, the NA index is underestimated, especially in terms of food. But also invisible things like the migration of prices from Bs to US $. But still, certainly the trend in February and at least the first half of March was to slow down hyperinflation.

On the other hand, and as we have been publishing recurrently, in the strict sense, this precarious slowing down of hyperinflation has been achieved on the basis of contracting in extremis the buying power of Venezuelans, therefore the consumption and the economic activity in general, otherwise severely affected in March by political unrest and electric sabotage.

What this means, among other things, is that hyperinflation, rather than being controlled, is barely contained, having as a secondary effect a greater economic contraction and a severe drop in purchasing power. Ergo: the rise in prices slowed down largely due to the fall in consumption. The same of course applies to the stabilization of the exchange rate.

However, everything indicates that for the first of May there will be a new salary increase. According to some enthusiasts, it will be substantial, meaning that it is equivalent to August 2018, albeit with the prices of April 2019. But here there is a dilemma for government economic policy: if your “victory” over inflation is due to the contraction of purchasing power and the economy, then increase the salary and improve purchasing power moves against that victory.

This is what at some point we call the trilemma of the goals of the BCV: it can stabilize the exchange rate and slow down inflation with aggressive monetary policies, but can’t at the same time recover the purchasing power, because the loss of this is the condition of possibility of those.

Whatever it is and in the current scenarios we are sure that this is a story that still has much more to come, a loop whose temporality of sequences, as its performance has been seen, are still unpredictable.