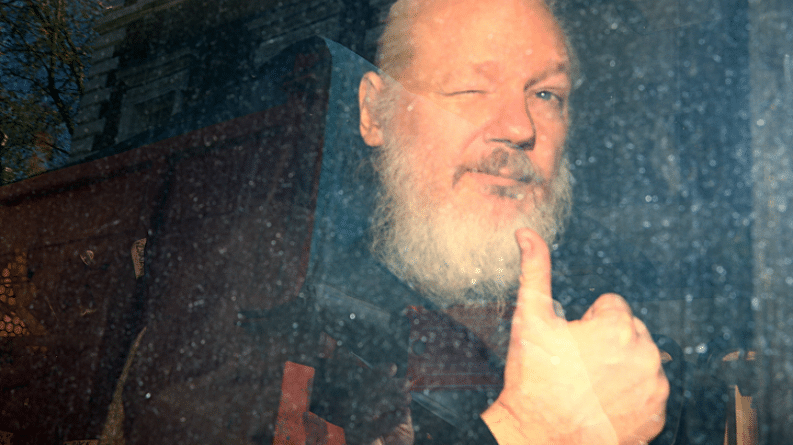 In the last weeks, Wikileaks denounced the government of Lenin Moreno for the planned delivery of Julian Assange to the British authorities, who until this Thursday kept, at least, a policeman under the bathroom window of the embassy of Ecuador in case he tried to escape through there.

With advance knowledge of these facts, no corporate press agency or media outlet installed a single camera in the embassy in case the founder of Wikileaks was arrested as it finally happened. If it had not been for the Russian agency Ruptly, the iconic image of Assange screaming during his arrest by British authorities would have been silenced from international public opinion.

Before the kidnapping, in a more than symbolic event, the ambassador of Ecuador, who had restricted the communications of Assange by order of Lenin Moreno, allowed the British police to enter Ecuadorian soil and take prisoner one of its asylee citizens in the diplomatic headquarters . According to The Economist, the delivery of Assange is part of the Moreno administration’s changes after the signing of a financial agreement of more than 4 billion dollars with the International Monetary Fund (IMF).

As in an exchange of prisoners of the Cold War, outside international law, Moreno violated the rights of an (also) Ecuadorian citizen, a refugee, in exchange for money from the IMF after Wikileaks, in the middle of an information war to protect Assange, revealed that the president is related to an offshore account that received money from a Chinese corporation, benefited from the construction of a hydroelectric plant in Ecuador.

In this way, one can observe how, by way of deeds, state powers and corporations instrumentalize a regime of exception that bypasses its own rules of international law to go against individuals, groups of people or states that are contrary to their interests. The Assange doctrine, which justifies his arrest, incidentally, has the same pattern of aggression used against Venezuela.

PUNISHMENT AND PUBLIC TORTURE AS A SYMBOLIC FORM OF EXECUTION
UN torture exper, Nils Melzer, affirmed a few days before Assange’s arrest, that the United States could “expose him to a real risk of serious violations of his human rights, including his freedom of expression, his right to a trial fair and the prohibition of cruel, inhuman or degrading treatment or punishment”.

According to Melzer, “extradition without due process guarantees, including an individual risk assessment and adequate protection measures, violates international law, particularly if the State of destination applies the death penalty and has not disclosed the criminal charges against the interested person”. In such cases, he explains, the international legal principle of “non-refoulement is absolute, regardless of considerations of national security, political expediency or any other similar consideration.”

British justice ordered his arrest for violating probation, granted in this country, immediately after the Department of Justice reported that the United States will request his extradition for having conspired with Chelsea Manning, an intelligence analyst from the Department of Defense, to leak thousands of secret documents about Washington politics around the world. For the indictment, Assange can face five years in prison, however, as is common in these cases, the charges against him can be accumulated once he is in the United States with the aim of never letting him out of jail.

Beyond the partialization of justice, the UN expert on torture reveals a fact that is observed in the evolution of Assange’s physical appearance: his health is in serious decline and at risk of extreme vulnerability. In that sense, the harassment and demolition on the part of the American, British and now Ecuadorian authorities, has generated that by way of the facts, Assange was isolated in the last days and under the threat of being arrested .

What is usually done to those who leak information of interest is to pursue them physically and morally until they are brought to a state of complete personal fragility. At a certain point, public executions are no longer the same as before, with gallows and executions, but in broad daylight. The most eloquent fact of this lesson is that Assange spent seven years of his life locked in a building without being able to exercise any of his freedoms and rights.

The conclusion, more than demolishing, is that none of the myths of liberalism, such as democracy, freedom and human rights, are reserved for those who attempt against one of its fundamental pillars: the sepulchral silence around how wealth is based on looting and the blood of the poorest in the world.

THE END OF POLITICS AND THE WAYS OF “GOVERNING”: A POWER WITHOUT MEDIATIONS
One of the first revelations of Wikileaks was a video of the Air Force of the United States in which two pilots of helicopters laughed at a dozen dead, the product of bombing civilians in a district of Bagdad with the excuse of a supposed confrontation. The revelation was part of a series of secret documents that became the horror museum of US policy around the world.

While the level of accuracy of each of the crimes of the Washington messengers was exposed in an open source database, none of them was any surprise after the myths of the weapons of mass destruction to bomb Iraq and the War on Terror inaugurated by George Bush Jr.

No politician, businessman or ambassador of the United States was investigated by any of these revelations, as is customary, but these touched the deep heart of what is called the Establishment, or 1%, who according to studies provides 80% of the money received by the two main political parties in the United States.

Wikileaks from that moment was transformed into a group of political action in network with important capacities of influence in the scene of the western policy. What was seen in its entirety when they leaked the emails of John Podesta, campaign manager of Hillary Clinton, as a way to stop the most accurate and faithful reflection of the policy at the service of corporations.

The story is well known: Hillary Clinton lost to Trump and Wikileaks justified going against her to avoid a full-scale war between the United States and Russia, as planned by neo-conservative advisers to Clinton such as Robert Kagan. According to Michel Reid, editor for Latin America at The Economist, for this type of action Assange “does not represent freedom of expression, but the subversion of democracy.”

So the persecution against Assange and Wikileaks comes orchestrated from most of the US security agencies for “subverting” a corporate democracy where the richest 1% puts $ 34 into political lobbies for each $1 invested by unions or groups of public interest.

Without mediation, power acts in violation of its own rules even when the actions of Wikileaks took to the presidency a candidate like Trump, manufactured on the other hand of those same rich of the 1% who took advantage of the discontent that exists against the corporate establishment that today puts Assange in prision.

After all, at a time when the founding myths of modern capitalism are corroded, at the same moment that one part of the globe precariously lives its life and loses social status, 1% tries to refine its tools of social control, more and more hyper technological (artificial intelligence, big data or robotics), to limit any political option that gives way to discontent outside the channels controlled by this minority.

The behavior of the 1%, faced with Assange, summarizes exactly the place they occupy in modern societies, who seek to modify the status quo.