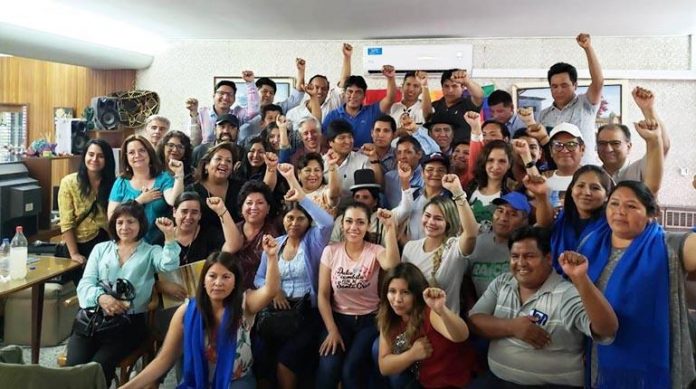 Former President Evo Morales surprised everyone yesterday when he gave a political speech at a public event in Buenos Aires, Argentina, where he spent his second day as a refugee.

“We are sure brothers, sisters, as always in Latin America, in the homeland, we have defeated the coup plotters (…). We will return soon, we will return soon and we will be millions and millions (…), ” Morales said amid a concentration of followers, at the same time, thanked the government of Argentina for allowing him to be closer to Bolivia.

He added that “at any time we will be together to report what happened in Bolivia.”

The vice president of the Six Federations of the Tropic of Cochabamba, Andrónico Rodríguez, also spoke to the crowd in Argentina and thanked Morales for his presence. In the videos that circulated on social networks, former Vice President Álvaro García Linera was present, among other cocalero leaders and legislators Adriana Salvatierra and Sonia Brito also traveled there.

“We have a small evaluation meeting, a planning meeting with brother leaders who have come from Bolivia. An important meeting, but aside from the meeting, this concentration gives us a lot of strength, a lot of energy,” Morales said.

The cocalero leader, Leonardo Loza, said yesterday that Morales will soon return to the country to continue promoting the process of change and for sure he will be the presidential candidate in five years, so he must “pave the way”.

RELATED CONTENT: Getting Away With Murder: ‘Clash’ as Media Euphemism for ‘Massacre’

“I am sure that very soon (Evo Morales) will be in Cochabamba, in Cliza, he will be in the tropics of Cochabamba. Also our brother vice-president (of the Six Federations), the compa Andronico (Rodriguez) has visited him in Argentina,” Loza said yesterday in the expanded assembly of the “Movimiento al Socialismo” (MAS), which was held in the municipality of Cliza.

Loza said that definitely in five years, Evo Morales must again be a candidate for the presidency and for this Bolivia’s social organizations must pave the way.

For his part, the president of the MAS in Cochabamba, Rimer Ágreda, said that there will be demonstrations if the threat that the Movement to Socialism will [be outlawed] is confirmed. “It would be the worst mistake (…). We will go out to the streets to defend our [movement],” said Ágreda.

He recalled that Morales’s recommendation, at a distance, is to maintain the unity of social organizations to continue promoting the political project.

The Bolivian ex-president yesterday enjoyed his second days in Argentina as a political refugee.

The bloc of the countries that make up the ALBA resolved yesterday to approve a declaration that condemns “the coup d’etat against the constitutional government” of Evo Morales in Bolivia, repudiates “the threats of the use of force by the United States government against Venezuela”, as well as “the repeated destabilizing attempts against the government” of Nicaragua.

“With the purpose of recovering the spaces conquered by the people with progressive governments, the government of the United States (…) revives methods that seemed outdated in the history of Latin America and applies new formulas of the so-called unconventional war,” he emphasizes.