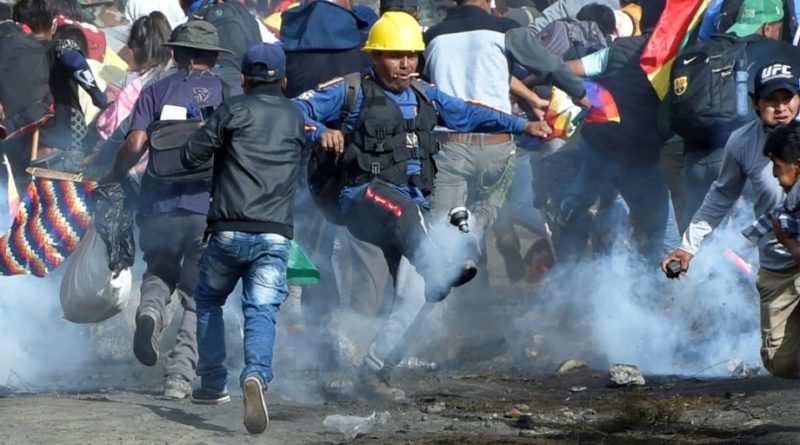 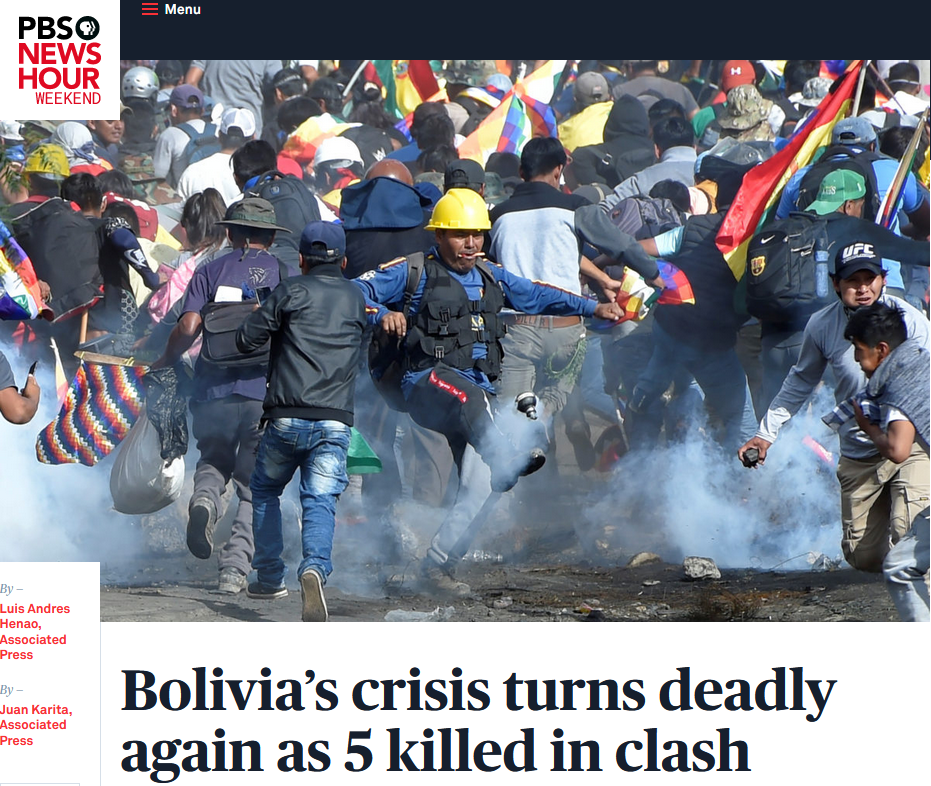 After deposing Evo Morales in a US-backed coup November 11, Bolivia’s military selected Jeanine Añez as president. Añez immediately signed a decree pre-exonerating security forces of all crimes during their “re-establishment of order,” understood by all sides as a license to kill. Those same forces have now conducted massacres of Morales supporters near the cities of Cochabamba and La Paz.

Corporate media have been laundering and obscuring the reality of the situation by referring to these events as “clashes.” “Morales Supporters Clash With Police in Bolivia,” a CNN headline (11/15/19) informs us—painting a very different picture than “Police Massacre Morales Supporters.” The Associated Press’s headline (Fox News, 11/16/19) was “Bolivia’s Political Crisis Sparks Dangerous Clashes, 8 Killed,” over a story that acknowledged that security forces opened fire on protesters. Another AP report (PBS NewsHour, 11/16/19) that could reasonably have been called “Bolivian Forces Slaughter Civilians” (as the story makes clear) was, in fact, headlined “Bolivia’s Crisis Turns Deadly Again as Five Killed in Clash.”

A few days later, the Guardian (11/22/19) presented police attacking a memorial march for those killed as a mere altercation: “Bolivia Funeral Procession Turns Violent,” ran its headline, telling us that “marchers clashed with police” during the service. Who was at fault when death squads were let loose on the mourners? Who knows! And thus, an armed police attack so brutal grieving pallbearers had to abandon the coffins in the street is turned into a nebulous violent act, with no clear perpetrator or victim. 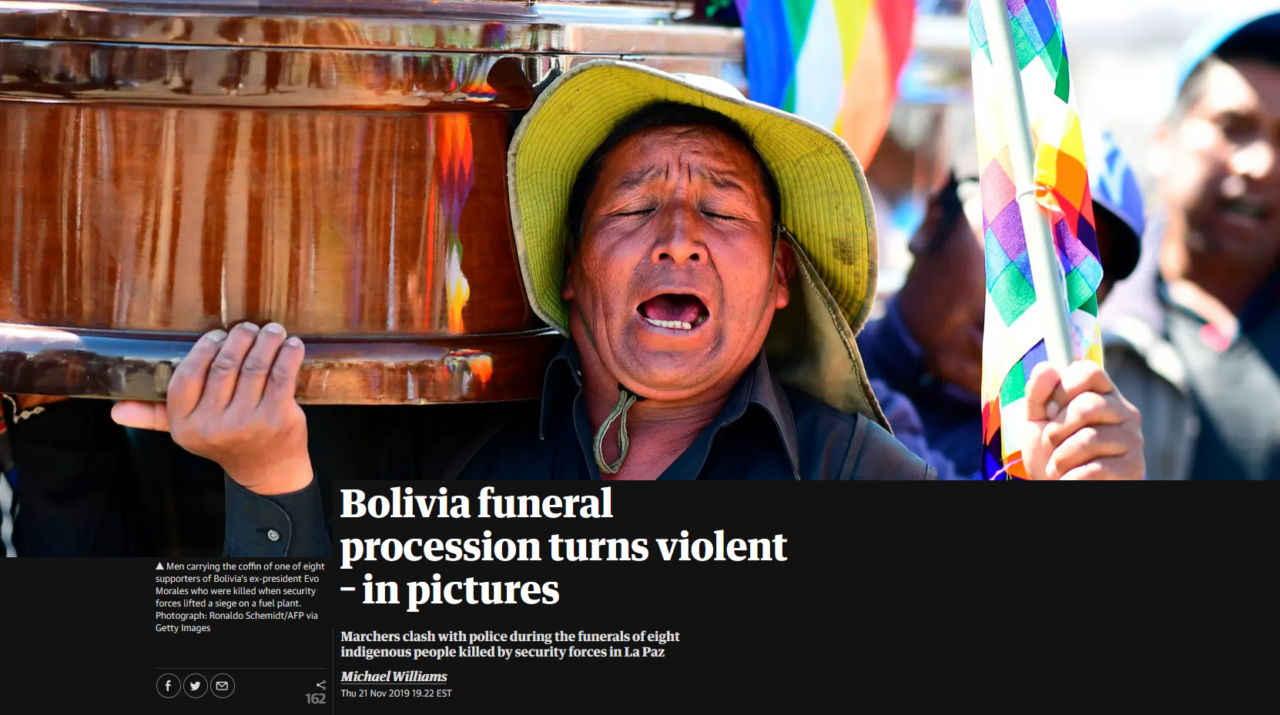 “Clash” is an oft-used and highly convenient word for corporate media when they have to report on violence, but, for whatever reason, do not want to assign responsibility to any party for initiating it. This could sometimes be because they are treading carefully, unsure of the full context, but, as FAIR has noted before (e.g., Extra!, 1/17; FAIR.org, 4/2/18), the term is chronically employed to obscure who instigated the violence, launder power asymmetry, and give the impression of two equally culpable sides. As Adam Johnson wrote (FAIR.org, 4/9/18), “‘Clash’ is a reporter’s best friend when they want to describe violence without offending anyone in power.”

A word for all occasions 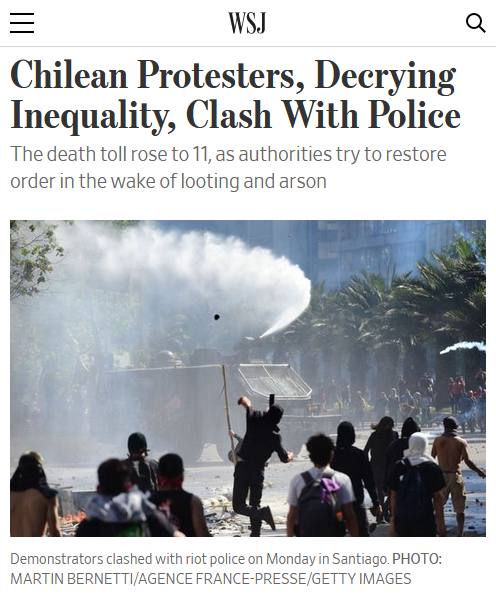 Meanwhile, in Chile, US-backed right-wing billionaire president Sebastian Piñera has literally declared war on the millions protesting his rule, sending tanks through the capital of Santiago and declaring martial law. As a result, 26 people have been killed and over 26,000 arrested.

Even when reporting on Israel’s assassination of a journalist (one who was clearly identified as such, as the article notes), CNN (4/7/18) still described the event as a “clash.” The journalist’s abdomen apparently clashed with an Israeli Defense Forces sniper’s bullet. On the killings during the Great March of Return, the IDF stated, “Nothing was carried out uncontrolled; everything was accurate and measured and we know where every bullet landed.” Nevertheless, the Los Angeles Times (3/30/19) still decided to describe whether the slain newsmaker was a “Journalist or Terrorist” as a question “Still Unresolved” in its headline.

As a comparison, Las Vegas shooter Stephen Paddock killed and injured a similar number of people in 2017. But there were no reports headlined “Dozens Die in Clash Between Partygoers and Gunman” in major media outlets, as this refusal to apportion guilt would be considered obscene beyond measure. Yet when official allies carry out similar violence, it is laundered through the passive voice and the use of neutral words. 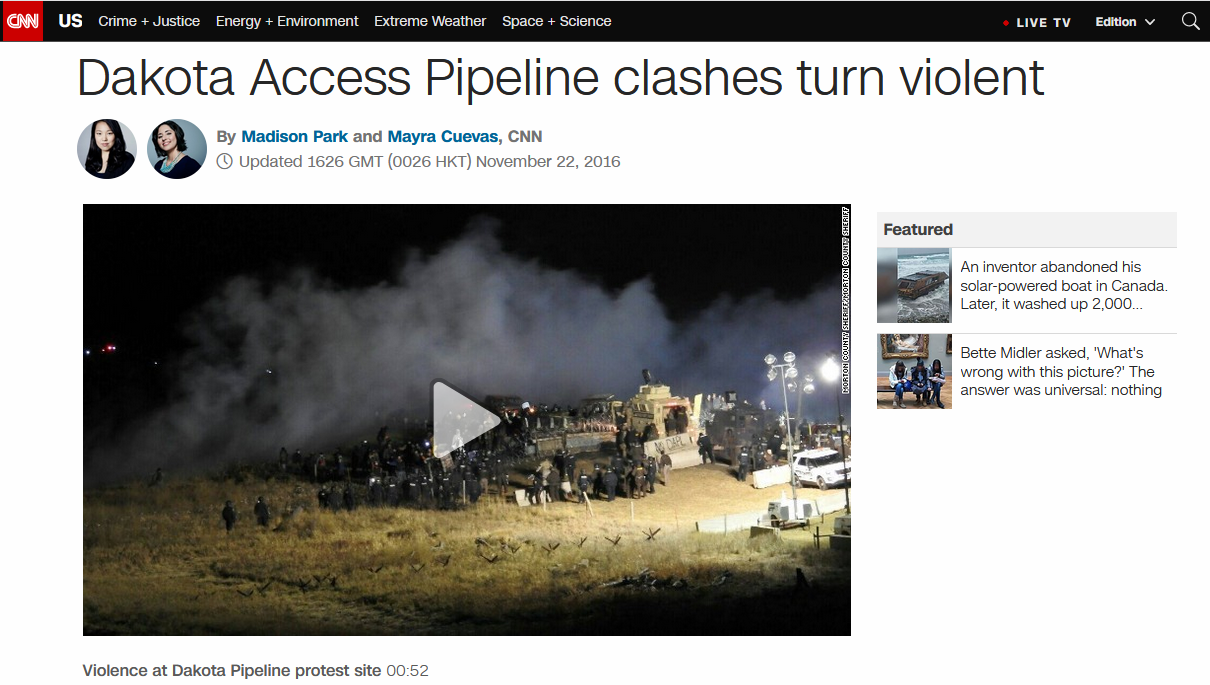 It is not just in foreign affairs that the technique is used. During the Dakota Access Pipeline protests, state violence against demonstrators was consistently passed off as a “clash” between purported equals (e.g., New York Times, 11/1/16; CNN, 11/21/16; PBS NewsHour, 11/21/16). The Guardian’s headline (11/21/16) on the situation read, “Hundreds Clash With Police Over Dakota Access Pipeline,” with the subhead going on to note: “Protesters opposing the controversial pipeline reported being hit with teargas, rubber bullets and percussion grenades during the standoff.” Oh no! Somebody better arrest those violent bullets and grenades!

Likewise, FAIR (8/17/17) noted  that numerous outlets chose to refer to the premeditated attack by a white nationalist plowing his car into a crowd of protestors in Charlottesville as a “clash.” And further back, a CBS News segment (11/18/11) clearly showing baton-wielding police cracking heads at the Occupy Wall Street demonstrations in New York City was presented as a “clash” by the network.

Discerning media consumers should immediately be wary when they hear the word “clash.” All too often, it is used as a method of downplaying or sterilizing violence that media essentially approve of, similar to the way media use the passive voice to describe police killings—“man dies from bullet in officer-involved shooting,” etc. (FAIR.org, 1/30/18). It has the effect of removing all agency or guilt from parties involved, in a way that certainly would not be afforded to official enemies carrying out similar actions, where words like “crackdown,” “suppression” or “onslaught” would be used.

Words matter, and how issues are presented to us has an enormous effect on public opinion and in shaping society. In a very real sense, by muddying the waters, media are literally helping the powerful getting away with murder.