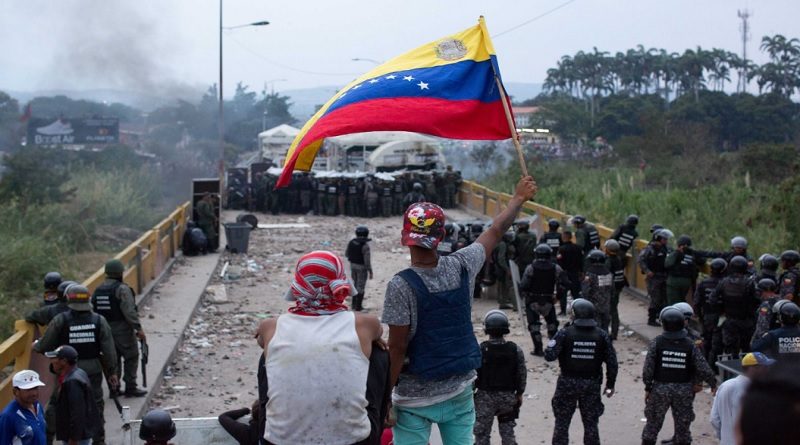 A year ago, imperial leaders failed in their claims to enter our territory, under the camouflage of a supposed “humanitarian aid”

Feeling enlightened and supported – after all, on orders from his masters he had proclaimed himself “president” a little less than a month earlier, under the spell of the mercenaries of journalism, surrounded by flatterers swearing that “it is now” would fulfill their wishes of ending the “regime”- the newly released puppet released the raucous threat that February 12:

– On the 23rd, humanitarian aid will enter yes or yes to Venezuela, determinedly and decisively!

Orgasmic reactions were swift among those who were overwhelmed by hatred that the time had come to collect from the Bolivarian Revolution all debts since Commander Hugo Rafael Chávez Frías evicted them from power.

Before the delirious concurrence, the prefabricated “leader” launched an “ultimatum” to the members of our glorious Bolivarian National Armed Forces (FANB), thinking that these, trembling, would ruin their honor and follow his call:

– “The Bolivarian National Armed Forces will have some days to side with the Constitution and humanity,” he shouted, while those who attended the show on Francisco de Miranda Avenue reached paroxysm.

In a sample of what would later be revealed as one of the features of his twisted personality, lying brazenly and without blushing, he tossed out the hyperbolic figure, without any evidence, of some supposed 250 thousand “volunteers” to distribute the “aid.”

Thus, he was repeating the script previously prepared by those designated for that purpose by their imperial masters, as part of the plot for the announced event, in which the Washington genocides swore that they would enter Venezuela on the back of the “Humanitarian” Trojan horse trucks, as an invader into his own house, without finding any resistance.

The rigging was fixed in collusion with the narco-paramilitary government of Iván Duque, on the Colombian side, and with the aspiring dictator Jair Bolsonaro, on the Brazilian side, with the slavish support of other authorities such as those of Curacao and Puerto Rico, from whose territories the departures of a plane and a ship was announced, allegedly loaded with food and medicine for the Venezuelan population.

RELATED CONTENT: “I Lost Everything. What I did was Worth Nothing”: Venezuelan Deserters who Supported Guaidó Now in ICE Custody CONCERT ON THE BORDER
Of course, every show, in addition to bread – the one supposedly represented by the “help” – also demands a circus and to complete it, eager to get its slice of Venezuelan riches as soon as the invasion took place, British billionaire Richard Branson announced a celebration the night before the date set for the invasion of the “Venezuela Aid Live” concert on the Cucuta side of the border with Venezuela, in which it was proposed to raise no less than 100 million dollars!

Immediately the desire to appear in the lucrative US market led many to jump in, offering to act in the show. Even one Don Omar gloated, letting him know that he would contribute with a million “greenbacks” to the cause.

However, British bassist Roger Waters, co-founder of the legendary rock band Pink Floyd, also snapped a warning that the businessman’s intentions were only concerned “with Richard Branson.”

That night from February 22 to the 23rd on that side, artists desperate to appear on the Miami or New York stages performed. The representatives of the “free press”, the sick with hate, drooling, could not wait for the arrival of dawn to see their invasion dreams fulfilled, camouflaged in “humanitarian aid.” Simultaneously and in contrast, very close by, in Venezuelan territory, another concert was held, but with popular artists, farmers and singers. All attendees, waiting for the new dawn, ready to defend the homeland with life if necessary.

“On that side was the VIP concert, of the rich people and on this one, of the humble, poor people, evidencing the class struggle,” the councilor from Caracas, Nancy Villegas said, who belonged to one contingent of more than a hundred of people who, after a journey of almost 30 hours, showed up at our border to prevent a foreign incursion.

Of the amount collected and their destiny, only the imperial puppet and his gangster group know (referring to the Venezuelan Aid Live concert).

FOR INDEPENDENCE!
Nancy Villegas was not only a witness but also a protagonist in those epic hours in which a people determined to be free, independent and sovereign, in loving, fraternal and determined unity with the members of our glorious FANB, prevented the entry of those who intended to defile the homeland.

– “It was like a new civic-military battle for independence, said the alderwoman. We went to defend the country. The Political Directorate of Caracas asked a group of party members to attend the patriotic concert of Las Tienditas. From La Vega, we were nine people, out of a total of 187. We were women, men, older adults, in an odyssey of 26 hours, because on the way they placed ‘miguelitos’, they threw stones at us” she detailed.

The regional leader of the PSUV, reports that “… at dawn 23 detonations were heard. In the morning, at an event near the Simón Bolívar bridge, in La Esperanza square, word began to spread that defecting national guards had stolen a tank and tried to drive it to the Colombian side, with the intention of generating violence and justifying foreign intervention, when Guaido (aka Juanito Alimaña) and his cronies from other countries arrived.”

At 7:00 that tense morning, three National Bolivian Guard (GNB) defectors seized two armored vehicles, throwing themselves at the fences placed on our main border bridge, sweeping several people in their wake including Chilean graphic reporter Nicole Kramm. “They are ours! They are ours!” shouted the fugitive anti-Chavista politicians José Manuel Olivares and Vilca Fernández, from the Colombian side, already waiting for them. It was the first false positive of the day.

– “They had their journalists, their mercenaries, their whole show set up. We were quiet, in La Esperanza Square, when at about 8:00 a.m. shouts began to be heard from Venezuela Street. Together with the police, we moved there. On the Colombian side, they tried to cross. That was the order, to generate violence, to activate those who were in the Colombian migration [center at the border crossing]. They started throwing stones, blunt objects, shots. They didn’t want to talk to anyone,” continues Nancy Villegas.

The battle had begun in that border area between the two countries, closed by the Venezuelan government hours before.

Transnational media magnified those who tried to make way for a foreign incursion into our territory. Several of the members of the political garbage of the continent congregated on the sidewalk of the front: Elliott Abrams, Sebastián Piñera, Luis Almagro, the narcoparaco Iván Duque, the Paraguayan Mario Abdo Benítez and, of course, the newly self-sworn, who to arrive had used the express transport services of the clandestine paramilitary group “Los Rastrojos”.

– “With us were, among others, Darío Vivas, Vilma Vivas, Julio Zerpa, Jesús Faría, constituents; Minister Eduardo Piñate, Freddy Bernal, Reinaldo Simancas, David Graterol, Ángelo Avendaño, Andy, people from the “Esquina Caliente”. Opponents became more aggressive. They even had paracos mounted in the mountains, with stones, Molotov bombs, guns, they were even below the bridge. There were many of us wounded, burned, both police and civilians, including older ladies. A comrade suffered a clavicle fracture. That was where the town was organized, women, men, our grandparents, in civic-military union, to give an answer, defending ourselves with stones. We had to grab up the covers of the garbage pots to protect ourselves,” recalls the alderwoman.

– “We were there from 8:00am to 6:00pm in the afternoon, resisting. There was a people determined to defend, even with their own lives, the homeland, the legacy of our commander Hugo Chávez, of our president Nicolás Maduro Moros. They did not pass and we lived in victory. We knew that this was the only way to return,” she rejoices now, while still looking back at that intense day.

Violence, the favorite weapon of fascism, coupled with media manipulation, prevailed. The rumors flew. “The aid passed through the border of Brazil and reached Santa Elena de Uairén,” the imperial puppet tweeted, which was quickly denied. Another false positive was the burning of trucks with their cargo. Sparkling mouths, wild eyes, mercenaries of journalism, out of focus, burst out, “The dictatorship of Maduro, the Maduro groups, burned trucks with food and medicine!” They launched this infamy out to the world. NAKED TRUTH
That was the trend they were responsible for maintaining even for several days, while ruminating on the bitter defeat suffered at that border. The truth, raised again and again by the government of the legitimate and constitutional president of Venezuela, Nicolás Maduro Moros, finally had to be recognized when it was reflected by an unexpected medium, The New York Times.

The newspaper, whose editorial line has been radically anti-Chavista, published at the beginning of March an audiovisual investigation in which it unquestionably demonstrated that vehicles with the supposed “humanitarian” cargo were set on fire with Molotov bombs dropped by the hateful right wingers.

“A homemade bomb made of a bottle was thrown at the police, which was blocking a bridge connecting Colombia and Venezuela to prevent “aid” trucks from arriving. But the rag used to light the Molotov cocktail separates from the bottle, flying towards the truck. Half a minute later, that truck is on fire,” the NYT revealed.

In addition, the outlet revealed that the video distributed by the government of the narcoparaco Iván Duque had eliminated the 13 minutes before the fire, evidencing his intention to distort what happened.

POPULAR VICTORY
Late in the afternoon, the legitimate and constitutional head of State Nicolás Maduro Moros, in front of thousands of protesters on Urdaneta Avenue, announced the failure of the attempt to violate [Venezuela’s] national sovereignty:

– “We have defeated the coup! The one who interferes with Venezuela withers! ” he shouted to the massive demonstration in front of the Miraflores Palace.

– “What we have in Venezuela is a State protective of the people, they do not have that in Colombia, Peru or Chile. Here we are, eager to defend our country and confronting imperialism,” he remarked.

Immediately, he announced the rupture of relations with the servile Colombian government:

– “You cannot continue lending the Colombian territory for provocations against Venezuela. In 24 hours, all diplomatic personnel from that country must leave Venezuela,” he ordered.

A year after that epic popular victory, the mayor Nancy Villegas reflects on the experience lived along with hundreds more on that February 23rd on the border with Colombia:

– “We must highlight the example of all those women, all the youth, men, who could resist against everything the fascists tried. We were more able more than them. We demonstrated the gallantry of a people of liberators in the face of these attacks. Today we can say it was worth it. They did not pass and will not pass. All those anonymous heroes and heroines, who helped us even to break rock, gave us water, defending our sovereignty, if we have to go back again to defend the country, we will do it without hesitation,” she emphasized.

– “Venezuela is at peace. There will be no empire that breaks the peace of those who decide to be free. We are overcoming. High in morale and patriotism. Here is a people that decided to be free. The empire will find us on a fighting foot every time it tries us, in this country of Bolívar and Chávez,” Nancy Villegas concludes.

It was the first of innumerable defeats suffered by imperialism at the hands of the Venezuelan people, since the beginning of their “experiment” with their self-proclaimed puppet … and with many to go!