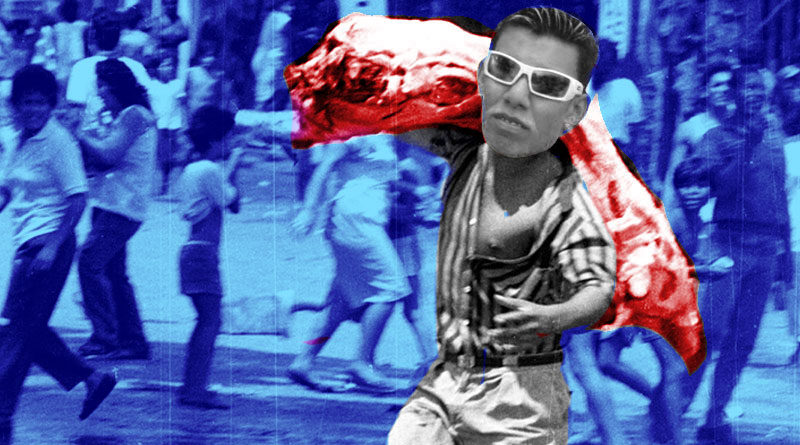 The Caracazo is 31 years old. We must define the “political generations” to understand the impact of February 27, 1989. There are three generations that have lived after the event; each observes the fact from the perspective of their age

Remember that 44.8% of the Venezuelan population is under 24 years old. More than half of the population were not alive during the Caracazo. But more than 55% are not old enough to remember it because they were children under 5 years old then.

Those we call the “generation of the children of the Chavistas” (regardless of their political position) are universally called “Generation Z” or “postmillennials”, born from 95 to 2005. They are “going out in the ring” already in a period of economic crisis and conceptual and cultural change. It is marked as a generation because it was born, regardless of its economic status, in a paradigm shift like the one that no previous generation lived. For example, unlike all the previous ones, it has no empathy for TV, radio or newspapers, which they call “analog” and “dysfunctional”. But the cell phone is its “privileged source” of political and cultural messages. They’ve “naturalized” the Internet, they can’t imagine a world in which it doesn’t exist. They relate to migration and networks by daily receiving messages from classmates in the neighborhood, in the high school or university with experiences abroad, already as migrants in another country, almost always from “Our America”. As a member of “virtual communities” Generation Z privileges these messages to those who exchange with their peers and close families. All this (phenomena) greatly affects the working class sectors where Chavismo had its “breeding ground”.

But in politics they also have notable differences with previous generations. They had not been born or were very small when the 2002 coup occurred (foundational to Chavismo), and the only references they have in this regard are the protocol. The “protocol” is the way in which officialism absorbs the meaning of the event and turns it into an “automatic discursive repertoire” whose “formality” is diametrically opposed, in spirit and staging, to the incorrect outburst that takes history out of any preset format. If 27F is the rupture of the formats, protocol is the way in which the formats reappropriate a “wild and incorrect” story. The protocol “kills” the event because it makes it boring, gray and senile when it was originally violent, irrational and violating of elemental norms and converts it more into “Official History” than “historical memory”.

If his grandparents made 27F and his parents produced Chavismo, this generation had to attend the “death of Chavez” as a founding event. But they have also witnessed, in some cases actively, a “rebellion of elites” (guarimbas) and a “official response” soley repressive and very uncultural. What they have not seen are “overflowing masses.” Politics do not place it in a “popular boom” that “takes power” like the previous two generations, but rather in the struggle of “political minorities” that monopolize boring national TV. That is, they see themselves outside the political tirade. They also lived, and some were part, of the guarimbas under an “anti-political” and radical conception that could not be channeled by the opposition political leadership and rebelled from it in the first flirting. And in the same way they have rebelled against “Chavista officialism” by discarding their functional discourse to the power established since they had memory. They did not know power factors other than those currently existing in the government and the opposition.

The idea of “leaving Venezuela” entered in an impressive way to their imaginary, although it is a growing trend in the entire working class sector, it is lived in a “rampant” way in this generational plot, who receive daily messages from their peers from others countries and therefore, are in direct contact with other realities. And, although they are young people raised in Chavista families, who come from public school and high school, who benefited from many food, education and health programs, they did not share the imaginary of the “Chavista boom”, what they lived was the death of Chávez as a founding milestone of their political life and this must be analyzed rigorously. Regardless that no policy had ideology as its north, this generation emerged as antipolitical rather than apathetic. Many may call them “traitors”, others might become “guarimberos”, many might have already left the country but they will come back with wealth and a world-perspective, so in that sense it continues to be a paradigmatic generation.

Their displacement -territorially speaking- abroad and -politically speaking- towards abstentionism is generating the aging of the country and of the political, state and middle and low-level leadership that can govern the social fabric in the coming decades, which would imply the formation of a gerontocracy, that in Venezuela means a class in power where those who decide will be over 60 years old and belong to the 20% of the population that occupies the peak of the population pyramid.

In this sense, these young people and adolescents of today can recognize 27F or 4F just as those who know a protocol event, say February 12 (Venezuelan Youth Day) or March 5 (anniversary of Hugo Chavez’s death). Without any significance, unless it is a holiday, which is not the case.

If the generation of 27F is the audience of Venevisión and RCTV (old Venezuelan TV stations), the next one was determined to intervene with the image via computers and video games. But cell phones were still analog. They were digitized and this new generation emerged (postmillenial). Facebook is the great stage of its symbolic movement. And on Facebook almost nobody will talk about 27F and what they say will have an impact only on their small networks of friends. If the revolution will not be televized, as documentary of April 13 (2002) was called, we can say that 27F will not be viralized, although all political representativeness remember it most in the protocol of twitter.

If “salsa cabilla” (hardcore salsa dance) was the promoter of the looting on 27F and reggaeton was the main animator of Chavismo, it is the national and international trap that defines the Venezuelan postmillennials. And if the first was represented on “Radio Rochela” and “Por estas Calles” (TV shows from the 80’s), the latest would prefer the humor of an instagram account and the TV shows on cable or Directv.

The days after 27F a message was read in a kiosk that said: “I sell a television with a typewriter”. The looters did not know they took a computer because it was an artifact for the generation that was to come. If a smartphone had been found (then), it was likely that it would have been destroyed as an instrument of police intelligence. They were definitely not from Generation Z.