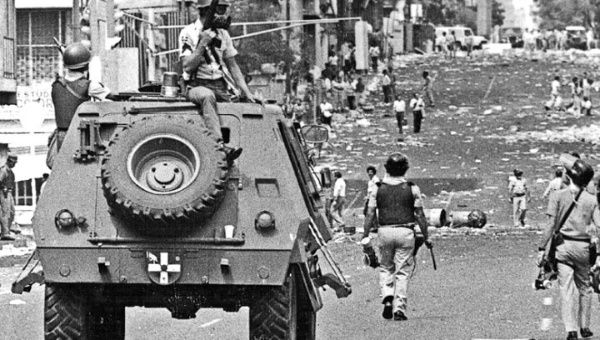 February 26, 2020.- “The role of Comandante Chávez was to resolve the wound left by February 27, 1989 also known as “El Caracazo”, when the Army told the people: ‘no more massacres, we will never again comply with orders to slaughter the people’ and so it has been fulfilled until now,” said revolutionary leader Elías Jaua Milano, during the 149th broadcast of his Popular Encounter radio show, broadcast by YVKE Mundial radio station.

On the occasion of the 31st anniversary of the popular rebellion of February 27 and 28, 1989, Jaua stressed that the Bolivarian people have committed themselves to preventing the return of the political elite who alternated in power for 40 years. “It is not only that AD and Copei do not return, it is that the politics of exclusion, of social inequality, of the outrage, of the arrogance of power, that were the activators of the rebellion of the people that never again will allow anyone to make them invisible,” said Jaua. Jaua said that the city of Guarenas was “the cradle of the first anti-neoliberal rebellion that the world knew before the 1990s,” and recalled that in those days there was “the massacre against a people that, tired of quietly enduring neoliberal policies, rebelled, exercised the supreme right that a people has to rebel when they are subjected to exclusion, marginalization, hunger, to outrage and arrogance from power. ”

Jaua stressed that, at the time the rebellion broke out, “the State, as part of neoliberal policy, had been reduced in its powers, in its ability to regulate and exercise authority based on the general interests of the people, and that is why on February 27, and the following days, neither political leaders of the parties, nor aldermen, nor presidents of Municipal Councils, nor appointed governors, nor ministers, nor trade union leaders of the status quo appeared to give an answer and to try to channel the process,” he recalled.

Likewise, the revolutionary leader emphasized the importance of keeping alive the memory of those dark hours of our contemporary history, because “memory is a revolutionary duty, to cultivate historical memory; to know the origins of the Bolivarian Revolution; far beyond the slogans we must know about its protagonists, the facts, the causes, the consequences of this popular rebellion and its brutal repression by the government of Carlos Andrés Pérez.”

The protagonists speak
In this edition of the show “Popular Encounter”, dedicated to remembering the rebellion of February 27, several exceptional actors spoke, who actively participated in the day of protests that preceded the social outbreak and lived in their own flesh the excessive repression ordered by the authorities and executed with cruelty by the Armed Forces and police forces.

In 1989, Eleazar Juárez was president of the Federation of Neighborhood Associations, and recalls that the spark that lit the prairie was the struggle of the inhabitants of Guarenas against the indiscriminate increase in the price of bus tickets, and for respect of the preferential student fare and the exoneration of adults and older adults. “The increase is convenient for them, they have not done anything other than live off of the drivers; every time there are increases, they increase their salaries and the poor people pay for the whole situation; we decided to face it, we stated that it should not be more than 30 percent increase in tickets.”

Juarez said that, being mocked by the authorities and transport centers with a 50 percent increase in tickets, “we decided to take the City Council, but with the president inside, with the aldermen inside too, because they had to answer to the people the falsehood that they had maintained for more than a month, we did that.”

For his part, Edgar Carmona said that from early in the morning, “the neighbors had come by inviting [people to] protest, the meeting was in the vicinity of the Terminal; students of the Canonical and Technical Benito joined the people of Menca who were marching towards El Samán,” and he said that in the mall of the area several police officers began the looting, where “people went to get what would never come to them”.

Carmona added that after the curfew was decreed on February 28, this order “gave police forces the license to kill. It meant a day of much violence, really macabre; there was a time when the neighbors set up a field hospital, to treat injured by projectiles, bullets, who for fear of reprisals were treated inside the same building,” he recalled.

Meanwhile, Richard Linares, who was a student of the Benito Canonical Educational Unit, said that he and his fellow students and those of the Rubén González Technical School “walked out to the Los Naranjos traffic light, grabbed a semi truck carrying fuel and drove it to the Terminal turnaround to block traffic. Before curfew, we stayed in the fight, we continued in the street in support of the Popular Power.”

Finally, Eleazar Juarez expressed his gratitude to the YVKE Mundial radio station, “because it was the only medium that disclosed what was happening in Guarenas and other sectors of Miranda state and that led to it being known abroad; the news reached Spain, for us the Guareneros, that was a great satisfaction.”

As a message for the new generations, Juarez said that “this revolutionary process is not mine, it doesn’t belong to Chavez, it doesn’t belong to Maduro, it belongs to the Venezuelan people in general. We have a great role to play. Here youth must be prepared, in case there is an invasion, the youth has to go to the streets, the revolution cannot be stopped,” Juarez concluded.