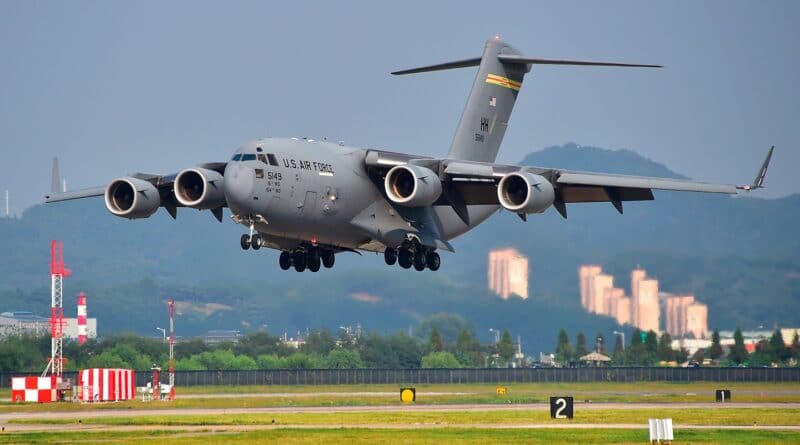 According to the Colombian Military Transport Air Command, the “powerful” aircraft supposedly returned four helicopters from the National Police that were undergoing maintenance in the United States.

The aircraft landed at the airports El Dorado in Bogotá, José María Cordova in Rionegro, Ernesto Cortissoz in Barranquilla and at the Combat Air Command No. 2 of the Colombian Air Force, located in Apiay, Meta.

RELATED CONTENT: Far Right Cries Out for Foreign Intervention Due to Colombian Paramilitary Attacks in Apure

The last time the US made a shipment of this type to Colombia was in 2019 when the US and former deputy Guaidó tried to force the entry into Venezuela of alleged humanitarian aid, later was demonstrated to be nothing of the sort.

According to the website webinfomil “the C-17 Globemaster III is capable of rapidly deploying strategic troops and all types of cargo to support operational bases or directly create advanced bases. It is powered by four F117-PW-100 engines with a thrust of 180 kN.”

RELATED CONTENT: The War Scenario in Apure is Transferred to the Media and Social Networks

This aircraft, the website details, is used “as a strategic transport plane for troops and supplies and is capable of carrying out missions of tactical transport, medical evacuation, deployment of airborne troops and the launch of paratroopers.”

It also indicates that the landing of these aircraft in Colombia is “an event with few precedents in the recent history of that country that is used to US military presence.”

Meanwhile, the internationalist Javier Alexander Roa pointed out on his Twitter account: “Carrying war equipment for terrorists? The US has deployed four C-17 ‘Globemaster’ aircraft in Colombia in the last 24 hours. A similar number of C-17 aircraft were deployed in Colombia in 2019, when they tried to introduce ‘humanitarian aid’ to Venezuela.”

Featured image: A C-17 Globemaster III similar to the four that have landed in Colombia in recent days. File photo.