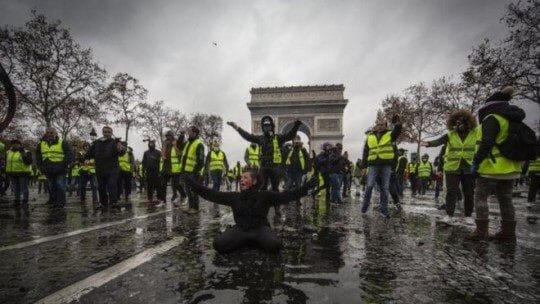 In the face of pressures that seek to impose the governments of Germany, Spain and France over Venezuela, Yellow Vests, have pronounced through their account on the social network Twitter, demanding the resignation of the French president, Emmanuel Macron, at the same time, they give him an ultimatum, so that he can call elections within a week.

Similarly, the mass movement has questioned that the French president occupies more time in interfering in the internal affairs of other nations, while in his country he has ignored the requests made by thousands of citizens, who are drowned with his neoliberal policies.

“Yellow vests self-proclaimed president of France in Acte XI and give a week to Emmanuel Macron to call elections in France, approve the RIC and respond to the people for the repression suffered under his mandate,” said the movement.

For his part, the Russian Ambassador to the United Nations, Vasili Nebenzia, described as “ridiculous” the 8-day deadline given by the Governments of Germany, France, the United Kingdom and the Netherlands, to Venezuela to hold elections, as a way to put pressure on the constitutional president Nicolás Maduro.

“How would you react if Russia proposed to address in the Security Council the situation in France and the protests of the ‘yellow vests’, that only this weekend have been 22,000 people who took to the streets? Would you consider it as preventive diplomacy? I want to reassure the representative of France, we will not propose it. Unlike you, we do not try to recognize or not recognize someone, although we do recognize the legitimate Government of Venezuela,” Nebenzia said.