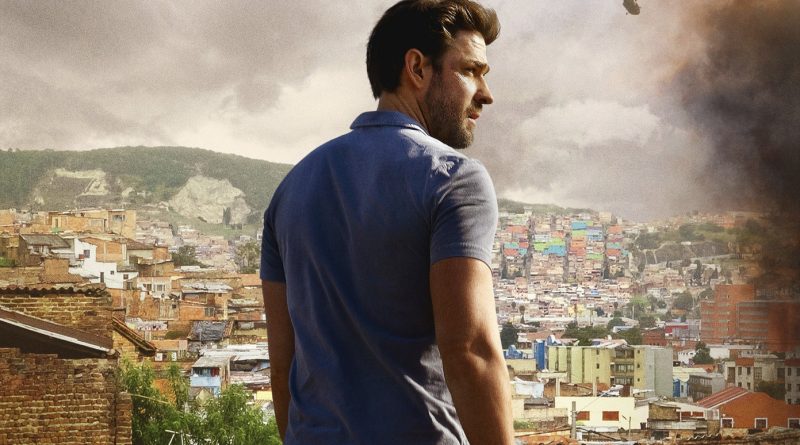 The US is starving and killing Venezuelans in real life and, for your family’s viewing pleasure, on television screens.

“Imperialism is quite bipartisan and liberal Hollywood never saw propaganda it didn’t want to hype.”

“The military intervention of #Venezuela, put ‘on the table’ by @realDonaldTrump and his gang of fanatic supremacists, is supported by the gringo propaganda machine. Here is a fragment of their ‘cultural offerings.’”– Ernesto Villegas, Venezuela Minister of Culture

Americans are loathe to think of themselves as being propagandized. The idea is inconsistent with notions of exceptional goodness and superiority that are constantly evoked in this country. But government propaganda does not work in a vacuum. It is bolstered by the corporate media and that includes the entertainment industry.

The latest in the story of fictitious CIA agent Jack Ryan is a case in point. The Ryan character appeared in five different feature films before moving to the small screen via Amazon Prime Video. The new season premieres in November and in this latest incarnation Ryan fights to prevent a nuclear armed Venezuela .

The upside down presentation is typical of the perversion of truth so prevalent in the United State. This country is the only one to have used nuclear weapons and still possesses more than any other. It is the United States that recently withdrew unilaterally from decades old nuclear agreements with Russia. Yet Hollywood has woven a tale of Russia, the country which wanted to keep the non-proliferation agreements, as a villain giving nuclear weapons to Venezuela.

“Government propaganda is bolstered by the entertainment industry.”

Venezuela is the victim of United States aggression in reality and now on the screen. The doctrine of “maximum pressure” has killed 40,000 Venezuelans through sanctions that have deprived that nation of food and medical care. That proof of U.S. aggression is known only to those who access independent media sources. The corporate media, even those who are allegedly liberal, parrot Donald Trump administration talking points, even if they otherwise deride the president and his team. Imperialism is quite bipartisan and liberal Hollywood never saw propaganda it didn’t want to hype.

Of course liberals who are usually overcome by Trump derangement syndrome are happy to go along with aggression schemes. Very few Democrats have expressed opposition to the anti-Venezuelan plots hatched by Trump. There is indeed foreign policy collusion but it doesn’t exist in a relationship with a foreign government. The determination to support American hegemony is an important part of the elite consensus.

That obvious truth is also disappeared and is not to be discussed in what passes for polite and “serious” company. According to myth, America is a classless, post-racial meritocracy and accepting of every political viewpoint. Of course it is anything but. The hierarchies are rigid and tenaciously defended.

“The corporate media, even those who are allegedly liberal, parrot Donald Trump administration talking points.”

Propaganda delivered via popular entertainment plays a particularly insidious role in this process. The goal is to change minds and ensure support for any act the government should choose to make. If this particular iteration of the Jack Ryan story isn’t challenged then no act or aggression will be challenged either.Media imagery is very powerful, that is why governments work so closely with corporate media to present their narratives.

Mace Neufeld created the Jack Ryan film franchise. In 2014 he received a lifetime achievement award from the Israeli Film Festival. Curiously, the event wasn’t held in Israel at all. Instead Beverly Hills was the venue. Neufeld’s co-honoree was Arnon Milchan, a former Mossad operative who parlayed that career into producing hit films such as Twelve Years a Slave.

Israel isn’t alone in this regard. The CIA and the Pentagon both have film liaison offices . Movie credits often end with thanks to the department of defense. That always means that the plot line is approved by the military and the surveillance state.

“Movie credits often end with thanks to the department of defense.”

This grotesque lying on a mass scale cannot be ignored. The propagandists know that repetition plays a huge role in the process of indoctrination. For years Venezuela has been used as a bogeyman to convince people in this country to act against their own interests. “Socialism doesn’t work, just look at Venezuela,” is a statement made to end discussion of free health care or college education or housing or anything else that people need and want. After the 100th New York Timesarticle which says nothing about the U.S. attack but points out that Venezuelans are hungry, the job has been done. Venezuela is now so thoroughly demonized that only a small number of people will come to its defense or even question their government’s policy against that nation.

“Venezuela is now so thoroughly demonized that only a small number of people will come to its defense.”

In 2002 and 2003 the president, the corporate media, and members of Congress all claimed that Iraq possessed chemical weapons. They wanted to make a case for war and they succeeded. Nearly 20 years later there has been no explanation or apology from the guilty parties. The same people claimed that Syria had chemical weapons and advocated for a larger war there. It isn’t hard to believe that a lie about chemicals or nukes in Venezuela could be used to do the same thing if that is what the establishment desired.

Entertainment isn’t harmless. That is why the ruling clique work together to ensure that they all stay on message. They haven’t spent millions of dollars honing the false message that Venezuela is a failed state with evil leadership for no reason. Venezuela’s culture minister, Ernesto Villegas , hits the nail squarely on the head when he describes this latest insult as “crass war propaganda masquerading as entertainment.” If the U.S. should take military action or continue its regime change efforts, the plot will have succeeded. A few well informed people will speak out but the masses will either support an atrocity or ignore any horror that their leadership cares to visit upon the Venezuelan people. Washington and Hollywood are still working hand in hand.

Margaret Kimberley’s Freedom Rider column appears weekly in BAR, and is widely reprinted elsewhere. She maintains a frequently updated blog as well at http://freedomrider.blogspot.com . Ms. Kimberley lives in New York City, and can be reached via e-Mail at Margaret.Kimberley(at)BlackAgendaReport.com.