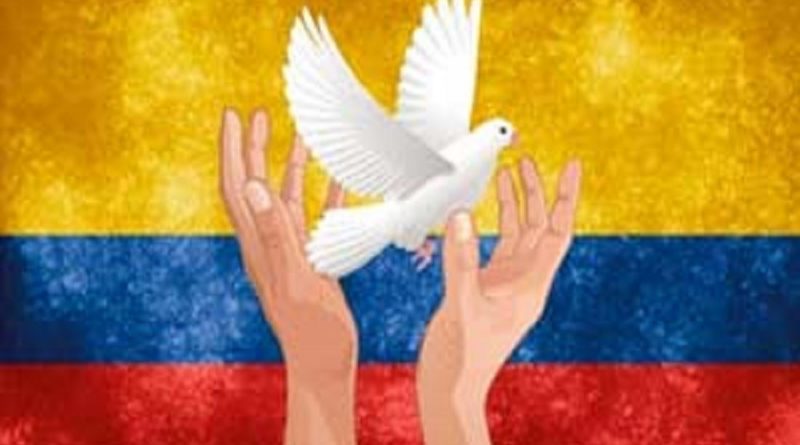 The most violent sector of the Colombian oligarchy has increased its power, capital, lands and political influence from the failure of peace agreements during the last 60 years. They live in such a comfortable reality and monitor it fervently, as guardian dogs against anything that may threaten it.

This statement may seem like an exaggeration but it is a truth that discomforts those who stubbornly refuse to accept it and a truth that is backed up with an army of 500,000 men. Not only those who have benefited by the continual betrayal to every peace agreement but also those who are clinging enthusiasts,—though brave and honest—believers of the only thing possible: a peace as they’ve always desired.

It is not truth either that there is an open and total civil war between two armies and millions of deaths and destruction, as it is indeed in a real civil war, that would have solved the deep contradictions accumulated throughout decades. But not now.

Not a total war nor a complete peace, like if the pendulum of history would have stopped after the independence war. Looking back in history, this has been the trend. Civil wars between parties fighting for post-independence power, ending up in an armistice and subjugating the “losers” by half signing a conditioned peace, with a new Constitution favoring the “winners.”

The announcement of the second Marquetalia (place where the FARC leaders founded the guerrilla struggle) has triggered all sort of reactions through the new peaceologists and opinionists of all kind, including the one writing this article—a weird benefit from the Agreement which allows the left to discuss it again or to fall to pieces, depending on the perspective.

Attacks against those that joined the new guerrilla proclamation, which is not actually new since the conflict is just being redirected, as well as against its main actors, has caused many to lose their minds in the face of a new phase of the conflict they did not expect. These attacks are so filled with hatred and poison that they are causing a deeper and deeper wound.

The proclamation released by Ivan Marquez, Jesus Santrich and company has only received the disapproval and accusations displayed by Colombia’s typical pettifog. They are accused of throwing the peace agreements overboard; leaving aside those who truly are responsible for the historic tragedy of the Colombian people; none other than the dishonest and criminal bipartisan oligarchy. They have even suggested that the reformation of the FARC as combatants has thrown them their lifesavers.

They are accused of not announcing themselves with a huge guerrilla siege nor firing even a single shot, an inexcusable sin of the old guerrilla; of taking an “insane” decision, as their former comrades in arms who are claiming there are not “political reasons” to go back to arms. They go on to say that they “betrayed” the agreements and their own comrades who decided to heroically and stoically resist extermination and unfulfillment that they are “another gang of drug dealers”, that they were armed and protected by President Nicolas Maduro in Venezuela,( the usual lie and excuse to attack the sister nation); that they are making a fuss; that they are just a small group “not understanding the moment” and finally that they revealed who they really are, nothing less neither the context for those new adventures; and finally that they less than “mentally-ill people.”

A string of emotional and visceral things have been said, headed by hatred, anger and disapproval, as it was mentioned above, rather than criticism based on serious analysis with sound arguments and which present above all the history behind the repeated failure of peace agreements during the last 60 years and who has the responsibility of discussing when it is legitimate and fair the crucial decision of taking up arms again.

What is clear is that this is not about a group of feverish guys who want to go to the jungle to play war, as many people are trying to make believe, obviating that speeches do not make history. They are feverishly being condemned as if the only reasonable and sane thing in the huge mental hospital in which Colombia has been for decades was to withstand the “lucid” and “normal” extermination which, sometimes slowly sometimes wildly, has undertaken the bipartisan oligarchy against those who dared to defy them with their arms and demands. This includes the group of peasants headed by Manuel Marulanda back then in the fifties and then in the sixties in Marquetalia, where they did not wait for the entire population to be behind them so as to exert their right to rebellion and uprising against their executioners.

It was not after a general meeting with the Colombian people that this group of heroic peasants pledged their right to rebellion and founded the revolutionary army, which would mark a milestone in the struggle for peace, dignity, land, and then socialism in Colombia. They did it due to a fundamental reason: defending their life.

Let’s hope we are not reviewing history or denying it as the party of war the Democratic Center desires with such tenacity. They are the ones governing Colombia through their simplistic alliance with the most reactionary, gangster, and criminal sectors.

Those who insult with anger instead of arguments the new group in the Marquetalia are forgetting those who are historically in charge of the bloodbath and conflict, generation after generation. Blindly, they do not see that uprisings and rebellions throughout the history of humanity were almost always started by that group of outraged people who dared to defy the monarch, the tyrant or the oppressor.

Let’s affirm that a national movement favoring by majority that complete and definitive peace is yet to be built. This is the heart of the issue. How to break the majority consensus of extreme right forces that have historically opposed peace and who are currently governing the country is the question to be solved.

The movement in favor of peace has indeed made some steps but it has also gone backwards. It assumed almost alone the task of fighting for dialog and to defend the agreements. Prior to its signing, it gathered large amounts of people and big actions in the country, such as the national agricultural strike in 2013, which resulted in repression and tens of deaths, injured and imprisoned peasants.

It tried to raise awareness in support of the talks and a definitive agreement but repression, its lack of clarity and cohesion, hindered its transcendence beyond a movement of the moment made up by activists who wholeheartedly and boldly hoisted the flag of dialogs for a peace agreement.

That original movement for peace besides performed in a moment in which more than half a country was hypnotized by the discourse of war, a discourse based on fear, lies and threats.

That fear injected along decades through opinion trends that actively worked for it, together with the lies regularly spread, has more than half a country blindly obeying an authoritarian rhetoric, which is thinking and preparing the war that has not yet been concluded.

This is the same phenomenon that blocked the road to peace, the moral and constitutional imperative for any population —winning the support of the majority in a pedagogical campaign for the referendum on October 2016.

Leaving prejudices aside and without beating about the bushes, let’s say it honestly. Those who in advance affirm that the announcement of Ivan Marquez, Santrich and company will fail are not taking into account the details of Colombia’s history; they are forgetting that history has no personal whims, that it is conditioned by the forces and actors that build it.

There is not innocence or lack of political and historical conscience in them. Their behavior is consistent precisely with what they’ve said, been and signed. They never said an agreement must be fulfilled by one of the parties if the other is not doing it.

It would not be an agreement but submission, rendition. This is different to what they signed and fulfilled. To date, this has cost the lives of 150 guerrilla members. They proved they were trained in a military and political discipline in which respecting their commitment is a principle. However, in the face of betrayal, death threats, jail or extradition, they are not obliged to continue fulfilling the agreement. Let’s make it clear, they did not sign to go to the slaughterhouse voluntarily.

There will never be a peace agreement or a pact between the parties when only one of the parties is the one fulfilling it with discipline and obedience, even at the risk of their lives.