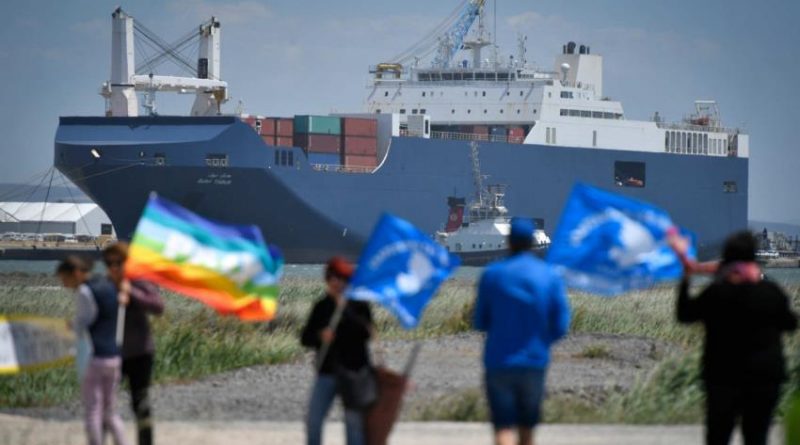 Activists have succeeded a second time in blocking a Saudi ship from collecting an arms shipment from France, according to rights group ACAT.

French rights group ACAT claim they have blocked a Saudi ship from collecting a weapons shipment from a French port, the second ship to turn back empty-handed this month.

Saudi cargo ship Bahri Tabuk has left the southern French port of Fos-sur-Mer without having picked up its intended shipment of French-manufactured weapons, blocked from doing so after a concerted campaign from human rights groups, ACAT said in a statement on Thursday.

This is the second time in a month campaigners have succeeded in blocking arms shipments to the kingdom, after another Saudi ship left French waters empty after dockers in the northern port of Le Havre threatened to block its arrival.

The Bahri Tabuk was set to pick up ammunition for French Caesar canons from the Mediterranean port. According to a leaked French military memo, the canons, along with French-made tanks and laser-guided missile systems, are being used by Saudi Arabia against civilians in Yemen.

The journalists who wrote and published the exposé were summoned for questioning with France’s internal security directorate, and may face jail time for compromising “the secrecy of national defence”.

Since the revelations in April, pressure has intensified for President Macron to scrap its lucrative arms deals with Saudi Arabia, steps that neighbouring Germany has already taken.

ACAT insist that these deliveries are illegal, violating a treaty France signed about regulations for arms sales.

Bernadette Forhan, the president of ACAT, said she was “delighted” to see another victory of French civil society.

“We congratulate in particular the dockers of Fos-sur-Mer for their humanist commitment to the fight against the illegal arms trade,” she added.

Following revelations from website Disclose on Tuesday that the ship was due to pick up the munitions, Defence Minister Florence Parly told lawmakers she was “checking out” the claim.

“If this is indeed the case, would it be surprising? No, because we have an accord with Saudi Arabia,” she said.

A representative in France for the Saudi shipping company involved denied any plans for a weapons shipment. However, such a deal would likely be kept under wraps to avoid the efforts of campaigners.

Several French lawmakers have called for a moratorium on arms sales to Saudi Arabia, similar to the freeze enacted by Germany last October in response to the murder of Saudi journalist Jamal Khashoggi.