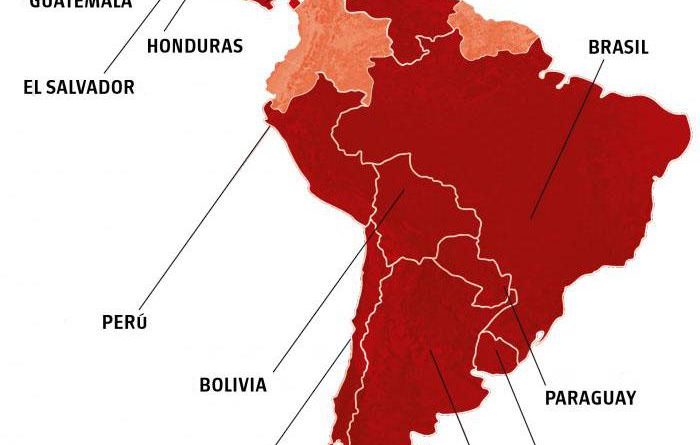 The current U.S. President again threatens military action against Venezuela and continues sanctioning governments and companies with ties to the Bolivarian Republic and Cuba

More than 200 years have passed since James Monroe became the fifth president of the United States. Unlike Donald Trump, he had been a soldier, lawyer, senator, governor and even Secretary of State. Trump, the country’s 45th President, a multimillionaire inexperienced in politics, has done nothing more than repeat what was said and done by the inventor of the “America for Americans” doctrine.

What happened in 1823 and what is happening today have in common Monroe’s philosophy, which is being dusted off by Trump, to making a reality of the notion that the nations of Latin America are Washington’s backyard.

The latest threat to Venezuela of a possible military intervention, the recent coup in Bolivia under the auspices of the Organization of American States (OAS), the tightening of the blockade of Cuba, destabilization in Nicaragua, and open interference in the internal affairs of countries in the region, where democratic governments have set the standards for development and sovereignty, do not come as a surprise.

“Here in the Western Hemisphere we are committed to maintaining our independence from the intrusion of expansionist foreign powers,” Trump stated at the United Nations General Assembly in New York in 2018. “It has been the formal policy of our country, since President James Monroe, that we reject interference by foreign nations in this hemisphere and in our own affairs,” he added cynically.

In February 2018, then-Secretary of State for the Trump administration, Rex Tillerson, said, “the Monroe Doctrine is as relevant today as it was on the day it was written.”

On that same date, another member of the President’s group of hawks, John Bolton, said in an article in The Hill, that Russian interference in Latin America could inspire Trump to reaffirm the Monroe Doctrine.

This is how this first term of office is going, for a President who intends to be re-elected next November.

This is a state in which, in 1904, President Theodore Roosevelt established that if a European country threatened the rights or property of U.S. citizens or companies in a Latin American nation, the government was obliged to intervene in the affairs of that country to remedy the situation.

In these cases, we must consider what leaders of the U.S. empire have understood and understand today, regarding the rights or properties of U.S. citizens or companies.” The Helms-Burton Act made their pretensions law.

Let us not forget the long list of U.S. interventions in Latin American nations, to make sure their colonial status was not threatened, including invasions, coups and blockades, and other hostile actions. While, at the time, Washington denied its role in overthrowing governments, documents declassified years later by their own institutions reveal the truth.

In the February 21 article, an official of the Trump administration was quoted as saying, “President Donald Trump is frustrated that pressure is building too slowly on Venezuelan President Nicolas Maduro and is still considering military options in the country, including a naval blockade.”

Invoking Monroe and his “doctrine,” Trump issued threatening warnings to companies that continue to do business with Venezuela, including India Reliance Industries; Repsol of Spain; the U.S. oil company Chevron; and several Greek shipping companies.

The article continues citing the unnamed official, “The administration continues to pursue what he called the Trump doctrine to foster democratic governments throughout the Western Hemisphere, akin to the Monroe Doctrine, which warned against European colonization efforts in the Americas two centuries ago,” adding that “Venezuela, Cuba and Nicaragua remain impediments” to this plan. Not much has changed in 197 years.

-In May, General Alfredo Stroessner led a coup against President Federico Chaves and installed a bloody dictatorship
Guatemala 1954

-On March 31, a coup against President João Goulart, followed by 21 years of dictatorship
Argentina 1966 and 1976

-In June of 1966, President Arturo Illia overthrown by a coup

-In 1976 another coup took place, this time against President María Estela Martínez de Perón
Bolivia 1971 and 2019

-Juan Maria Bordaberry, with the support of the CIA, established a de facto government
Chile 1973

-December 20, direct intervention by more than 20,000 U.S. soldiers to overthrow the President and massacre the civilian population
Peru 1992

-On April 5, President Alberto Fujimori carried out a “self-coup” in his country, with the support of the Armed Forces
Haiti 2004

Featured image: U.S.-backed coups in Latin America and the Caribbean over the last 70 years. Photo: RT