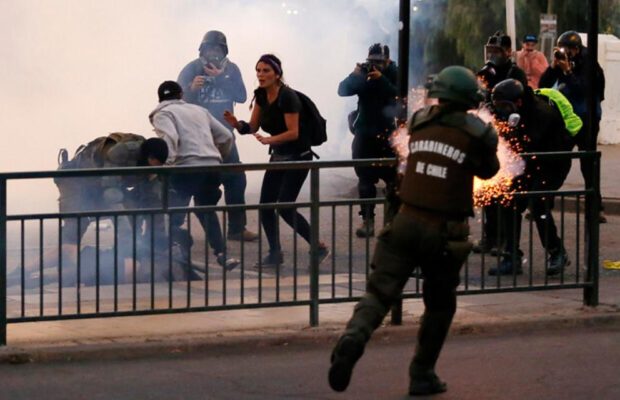 February 29, 2019.- Our fellow photojournalist Sergio Concha, who was seriously injured by a policeman who shot him at close range while he was covering a demonstration in Viña del Mar, has been hospitalized and will undergo surgery on Saturday morning.

Sergio was attacked by the policeman (see photo) who shot him from a few meters away, despite seeing that he was clearly a photographer who was covering an attack of the police against young demonstrators. Our comrade was quickly taken to a health clinic where an initial examination found that he had an exposed fracture of the kneecap.

According to the medical report, Sergio will have to stay at rest for two months. It is clear to see the objective of this type of attacks; to remove from the scene those who are reporting and documenting what is happening on the streets of Chile. Independent photojournalists like Sergio are the ones who are letting the world know can that there is a dictatorship in Chile with the unleashed carabineros acting as its armed apparatus.

In the last few days, the attacks of the police have become more violent as they have been given the green light to whatever they want to on demonstrators protesting the Viña Festival but also specifically against the reporters and popular communicators on the scene

Piñera needs the silence of the press and has imposed strict censorship, which adds to the complacency of many pseudo-journalists who have no interest in reporting the Chilean reality and constantly misinforms.

It is only the presence of photographers and reporters willing to risk being beaten, gassed and arrested on the scene. They are there to inform about the atrocities committed daily by the regime.

We send our fraternal embrace to Sergio and stand in solidarity with him, along with Leandro (another of our photographers), and with all the comrades who take risks in the street.

Featured image: Moment when a policeman shoots at our photographer (with a green backpack).