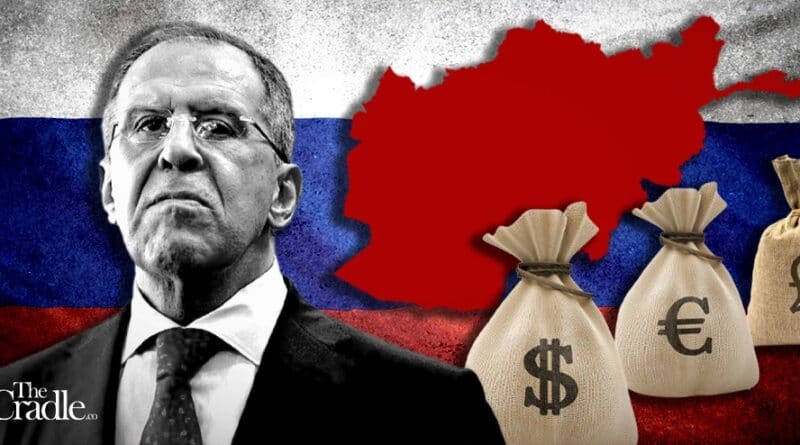 Asia’s powerbrokers dropped an Afghan bombshell in Moscow today: ‘the country’s reconstruction must be paid for by its military occupiers of 20 years.’

Facing high expectations, a five-man band Taliban finally played in Moscow. Yet the star of the show, predictably, was the Mick Jagger of geopolitics: Russian Foreign Minister Sergei Lavrov.

Right from the start, Lavrov set the tone for the Moscow format consultations, which boast the merit of “uniting Afghanistan with all neighboring countries.” Without skipping a beat, he addressed the US elephant in the room – or lack thereof: “Our American colleagues chose not to participate,” actually “for the second time, evading an extended troika-format meeting.”

The troika, which used to meet in Doha, consists of Russia, the US, China and Pakistan. The extended troika in Moscow this week featured Russia, China, India, Iran, Pakistan and all five Central Asian ‘stans.’ That, in essence, made it a Shanghai Cooperation Organization (SCO) meeting, at the highest level.

Lavrov’s presentation essentially expanded on the themes highlighted by the recent SCO Dushanbe Declaration: Afghanistan should be an “independent, neutral, united, democratic and peaceful state, free of terrorism, war and drugs,” and bearing an inclusive government “with representatives from all ethnic, religious and political groups.”

The joint statement issued after the meeting may not have been exactly a thriller. But then, right at the end, paragraph 9 offers the real bombshell:

“The sides have proposed to launch a collective initiative to convene a broad-based international donor conference under the auspices of the United Nations as soon as possible, certainly with the understanding that the core burden of post-conflict economic and financial reconstruction and development of Afghanistan must be shouldered by troop-based actors which were in the country for the past 20 years.”

The West will argue that a donor conference of sorts already happened: that was the G-20 special summit via videoconference earlier in October, which included UN Secretary-General Antonio Guterres. Then, last week, much was made of a European promise of 1 billion euros in humanitarian aid, which, as it stands, remains extremely vague, with no concrete details.

At the G-20, European diplomats admitted, behind closed doors, that the main rift was between the West “wanting to tell the Taliban how to run their country and how to treat women” as necessary conditions in exchange for some help, compared to Russia and China following their non-interference foreign policy mandates.

Afghanistan’s neighbors, Iran and Pakistan, were not invited to the G-20, and that’s nonsensical. It’s an open question whether the official G-20 in Rome, on 30-31 October, will also address Afghanistan along with the main themes: climate change, Covid-19, and a still elusive global economic recovery.

No US in Central Asia
So the Moscow format, as Lavrov duly stressed, remains the go-to forum when it comes to addressing Afghanistan’s serious challenges.

Now we come to the crunch. The notion that the economic and financial reconstruction of Afghanistan should be conducted mainly by the former imperial occupier and its NATO minions – quaintly referred to as “troop-based actors” – is a non-starter.

The US does not do nation-building – as the entire Global South knows by experience. Even to unblock the nearly $10 billion of the Afghan Central Bank confiscated by Washington will be a hard slog. The IMF predicted that without foreign help the Afghan economy may shrink by 30 percent.

The Taliban, led by second Prime Minister Abdul Salam Hanafi, tried to put on a brave face. Hanafi argued that the current interim government is already inclusive: after all, over 500,000 employees of the former administration have kept their jobs.

But once again, much precious detail was lost in translation, and the Taliban lacked a frontline figure capable of capturing the Eurasian imagination. The mystery persists: where is Mullah Baradar?

Baradar, who led the political office in Doha, was widely tipped to be the face of the Taliban to the outside world after the group’s takeover of Kabul on 15 August. He has been effectively sidelined.

The background to the Moscow format, though, offers a few nuggets. There were no leaks – but diplomats hinted it was tense. Russia had to play careful mediator, especially when it came to addressing grievances by India and concerns by Tajikistan.

Everyone knew that Russia – and all the other players – would not recognize the Taliban as the new Afghan government, at least not yet. That’s not the point. The priority once again had to be impressed on the Taliban leadership: no safe haven for any jihadi outfits that may attack “third countries, especially the neighbors,” as Lavrov stressed.

When President Putin casually drops the information, on the record, that there are at least 2,000 ISIS-K jihadis in northern Afghanistan, this means Russian intel knows exactly where they are, and has the capabilities to snuff them, should the Taliban signal help is needed.

Now compare it with NATO – fresh from its massive Afghan humiliation – holding a summit of defense ministers in Brussels this Thursday and Friday to basically lecture the Taliban. NATO’s secretary-general, the spectacularly mediocre Jens Stoltenberg, insists that “the Taliban are accountable to NATO” over addressing terrorism and human rights.

As if this was not inconsequential enough, what really matters – as background to the Moscow format – is how the Russians flatly refused a US request to deploy their intel apparatus somewhere in Central Asia, in theory, to monitor Afghanistan.

First they wanted a “temporary” military base in Uzbekistan or Tajikistan: Putin–Biden actually discussed it at the Geneva summit. Putin counter-offered, half in jest, to host the Americans in a Russian base, probably in Tajikistan. Moscow gleefully played along for a few weeks just to reach an immovable conclusion: there’s no place for any US “counter-terrorism” shenanigans in Central Asia.

To sum it all up, Lavrov in Moscow was extremely conciliatory. He stressed how the Moscow format participants plan to use all opportunities for “including” the Taliban via several multilateral bodies, such as the UN, the SCO – where Afghanistan is an observer nation – and crucially, the Collective Security Treaty Organization (CSTO), which is a military alliance.

So many layers of ‘inclusiveness’ beckon. Humanitarian help from SCO nations like Pakistan, Russia and China is on its way. The last thing the Taliban need is to be ‘accountable’ to brain-dead NATO.