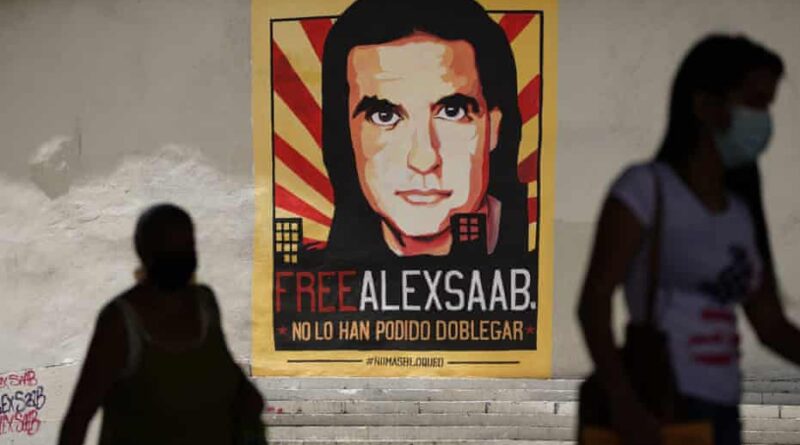 Venezuelan diplomat Alex Saab has been extradited to the US on thinly-veiled political grounds – but the media and ‘humanitarian’ NGOs are all too happy to toe the State Department’s line.

For over six years, the US government has enforced unilateral sanctions against Venezuela in what UN experts have called a breach of the country’s human rights and a violation of international law. A UN-commissioned report presented last month at the 48th UN Human Rights Council detailed the devastating social impact US sanctions have had on the South American country.

In keeping with almost two hundred years of the Monroe Doctrine and seeing Latin America as their ‘backyard’, the sanctions were justified by Barack Obama and subsequent administrations as a policy that promotes ‘national security’. Just as with Cuba for over half a century, it is hoped that the devastating impact of the sanctions on the population will eventually usher in a government change—a tactic called ‘soft’ imperialism.

Blocked from regular trade and therefore access to foods, medicines, and equipment to deal with the pandemic, Venezuela’s government appointed Alex Saab as a special envoy to secure trade deals with friendly nations abroad. In June last year, at the height of the global pandemic and without regard to his diplomatic status, the US pressured Cape Verde’s authorities to detain Saab on money laundering and corruption charges as he refuelled his plane. After being detained in the African country for more than a year and being subjected to physical and psychological abuse while imprisoned, the Venezuelan diplomat was finally extradited to the US last Saturday.

Despite the glaring evidence that the US and Cape Verde authorities have breached international law, including grave reports of human rights violations, in their detention of Saab, Western liberal commentators and analysts have toed the US State Department’s line. Appallingly, Western humanitarian workers have also been complicit in disregarding the many legal irregularities relating to the Venezuelan diplomat’s case.

RELATED CONTENT: The US Flies Alex Saab Out From Cabo Verde Without Court Order or Extradition Treaty

For instance, despite an investigation against Saab being dismissed and closed earlier this year by Swiss courts because of lack of evidence, Geoff Ramsey, a director for the Washington Office on Latin America (WOLA), a human rights NGO, tweeted that Venezuela’s government prioritises ‘money launderers’. Ramsey’s reaction, a highly politicised stance to take for a human rights advocate, is just the most recent example of a long history of Western humanitarian complicity with Western imperialist practices against Latin Americans.

Until recent decades the preferred method of US foreign intervention in Latin America was of a military and overtly coercive nature. Starting in the 1980s but mushrooming in the 1990s, the US (and the EU) have complemented these military strategies with social and civilian programmes that promote Western liberal normative ideals—democracy, human rights, and citizenship.

However, underneath this façade, analysts argue that NGOs and civil society organizations (CSOs) have become a more reliable and less risky approach for Western domination of the Global South. In essence, powerful nations funnel vast amounts of money to these ‘humanitarian’ programmes in oppressed nations to prepare the ground for political and economic domination.

For instance, to weaken the power and influence of radical movements and organisations in 1980s Chile, NGOs were used as political instruments by the US-backed dictatorship to demobilise the masses, blunt their demands, and redirect their attention to local disputes rather than national struggles against systemic oppression.

This is comparable to the EU’s ‘Peace Laboratories’ in Colombia that have received hundreds of millions of Euros in funding since the turn of the century. Researchers now describe these projects as the social arm of Plan Colombia, the violent counterinsurgency military strategy backed by the US and which the EU had claimed to oppose.

However, the intensity of this ‘soft’ imperialism today is most prominent in Latin American nations where progressive socialist-leaning governments have come to power. For instance, Western humanitarians have had a particular interest in Bolivia, where there is an overwhelming mandate for the leftist ruling party Movimiento al Socialismo (Movement towards Socialism) to govern its people.

In just one year, after the country’s first indigenous and socialist president, Evo Morales, came to power in 2006, registered NGOs tripled from 600 to nearly 2000. Suddenly, Western humanitarian agencies, particularly the US government’s USAID, became interested in Bolivia’s human rights record and its environment.

Unsurprisingly, NGOs with links to the West have been at the centre of protests and unrest against Bolivia’s progressive government, briefly deposed in a coup by right-wing extremists backed by Western powers. That’s not to imply that Bolivians do not have the right to protest and make political demands from their government, but, instead, that these have taken inorganic paths of extreme conflict, violence, and intolerance fueled in no small part by ‘soft’ foreign meddling.

Naturally, oil-rich Venezuela has, more than any other nation in the region, been on the receiving end of Western interventions, increasingly using humanitarianism as justification. Having been one of the world’s most unequal and violent societies for much of the twentieth century, it was only when Hugo Chavez’s socialist-leaning government came to power in 1999 that Western humanitarians began to pay closer attention.

In recent years the US and EU have made vast funding available for NGOs doing humanitarian work for Venezuelan migrants crossing over into neighbouring countries. To give a concrete idea of this operation, we can observe the work of NGOs like the US-based Mercy Corps, who have hundreds of millions of dollars at their disposal every year. Although independent UN experts and other analysts have shown the migration of Venezuelans in recent years has intensified due to US sanctions, NGOs like Mercy Corps employ the narrative of ‘humanitarian crisis’—purposefully and conveniently ignoring the economic roots, and crucially, the sanctions.

Popularising the idea of a ‘humanitarian crisis’ guarantees them further funding from Western nations who can then use their misleading reports to economically and politically isolate Venezuela’s government. The root cause of the situation is conveniently ignored because addressing the sanctions would mean acknowledging the responsibility of their own countries and challenging the hand that feeds them.

In this context, one can understand how human rights organisations and advocates in the West might (perhaps unwillingly if we give them the benefit of doubt) get caught up with imperialist practices in the Global South. WOLA’s Geoff Ramsey may indeed be interested in the human rights of Venezuelans (though selectively, ignoring Saab’s rights). Yet, he has clearly adopted the political stance pushed by Western powers to justify their extremist behaviour against the socialist-leaning South American country which, ironically, then pushes large sections of the country’s population to migrate, a situation that he purports to advocate for. In line with the propaganda work of other Western NGOs, Ramsey’s latest report for WOLA on the migration of Venezuelans in the region fails to include any recommendations on lifting the sanctions, widely understood to be at the root of the migration crisis.

To borrow the late Eduardo Galeano’s poignant phrase, Latin America’s open veins have not yet dried up for Western imperialists and their societies. Even with the advances made by progressive and socialist-leaning governments since the turn of the century, the region continues to be an essential source of much sought-after primary resources, agricultural produce, and cheap labour to produce low-level manufactured goods. In return, Western nations and their capitalists flood our markets with their expensive finished goods and their surplus agricultural and livestock products with which our own producers cannot compete.

When nations on the periphery of the capitalist world system like Venezuela attempt to address this cycle of economic inequality and dependency, even so slightly so that the market profits are redistributed among its own population, the reaction from the core nations of the system is one of extreme intolerance. With its mixed economy (not yet socialist), Venezuela is a threat to the existing global political and economic order.

As Latin America and the masses of the Global South fight for an alternative to the capitalist neoliberal model, the nations of the capitalist core do all they can to impede them. Considering that the urgent climate challenge is directly linked to our struggle to overcome the capitalist mode of production, it is surely time for Western allies to cast off their saviour-complex, forego their material and social privileges, and support us in the construction of a socialist world.

Venezuela’s socialist project has suffered setbacks, its government has made mistakes, but above all, the West has punished them for their heroic courage to dream of a new society. Free Alex Saab, lift the sanctions, let Venezuela be.

Carlos Cruz Mosquera is a PhD candidate and Teaching Associate at Queen Mary, University of London. He specialises in analysing the European Union’s ‘civilian power’ in Latin America and its role in maintaining the neoliberal status quo in the region.