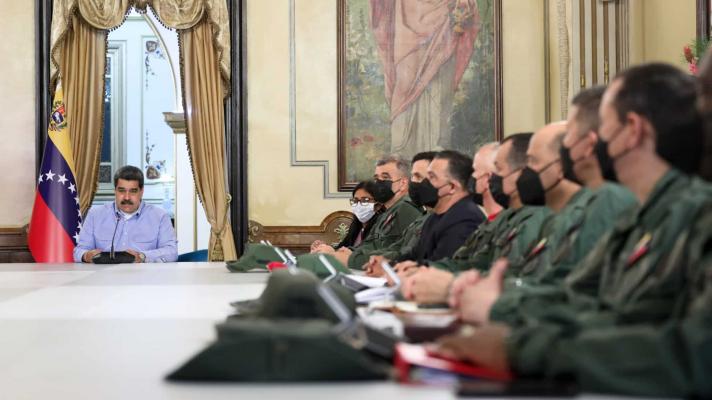 On Monday, March 7, President Nicolás Maduro announced a series of interconnected geopolitical initiatives that Venezuela will adopt, in the international geopolitical situation generated by the deployment of Russia’s special military operation in Ukraine.

During a meeting with the Venezuelan military high command and the council of ministers, the president expressed his points of view concerning “the effects of all kinds” that have arisen as a result of the armed conflict in Ukraine.

Taking into account the current global situation, Maduro declared, “We are doing everything in our power to ensure that, regardless of the future circumstances that humanity might face, Venezuela will be well taken care of. Nobody is going to give us anything for free; everything will be a product of our own effort.”

This is the outlook behind the recent increase in oil production, as well as the revitalization of the national economic scenario, the end of hyperinflation, and the blows to the gasoline- and drug-trafficking mafias by the Bolivarian Shield Operation 2022.

With these results in mind, Maduro’s statements demonstrate a forward-looking and assertive position within the context of the current conflict in Ukraine and the scenario in Venezuela and the world.

Venezuelan diplomacy ready to work for peace
President Maduro stated that in Venezuela, “we are seriously concerned about the possibility of an all out war in Europe and its repercussions in other parts of the world, which would aggravate the situation in many regions.”

“Madness has taken over the most important leaders of the West,” he added, in an implicit reference to the rulers of the United States, the United Kingdom, the European Union (EU) and the North Atlantic Treaty Organization (NATO). The conflict in Ukraine “could turn into a Third World War.”

President Maduro mentioned the economic and commercial impacts that are already occurring “in the sectors of energy, food, goods and services,” for which the government is “evaluating their possible effects in Venezuela” and taking the necessary socioeconomic measures.

However, the most important announcement came next when, after warning about the “very dangerous moment” that the entire world is facing, the president announced that Venezuela would seek diplomatic measures to establish a “peace agreement” between the Russian Federation and Ukraine.

Maduro expressed that through diplomacy, a dialogue can be established between the parties involved. At the same time, he emphasized the fact that there are external agents (United States/NATO) that are stirring up the military conflict. Venezuela, on the other hand, will do everything “not to let the conflict escalate to an all out European war.”

In this way, Venezuela would have an active diplomatic role “that would work for peace in different scenarios in the world.”

Such rhetoric has always been the guiding light for Venezuela, even in the most critical moments of the clash with destabilizing forces (external and internal) in the country.

In the current high-tension conflict, Maduro has not hesitated to support Russia’s demand for security guarantees, and has denounced NATO’s US-led expansion plans and the breach of the agreements that had been signed by Ukraine, and the powers behind the Zelensky government. These are “the first things that must be solved in this conflict.”

However, it is clear that this hypothetical scenario of negotiation cannot be hoped to come from those who have incited the current conflict in Eurasia. Hence, considering the situation and the agents involved, President Maduro stressed that it is Venezuela’s duty to “to guarantee peace and security for Russia in all world forums.”

Towards a reformatting of the dialogue
President Maduro also announced that the negotiations with the opposition factions in Venezuela will be reactivated and invigorated and will address “all the political, economic, religious factions in the country. We are going to reformat the negotiations and make them broader and more inclusive, encompassing all sectors of our national life.”

It is understood that, from the viewpoint of the political and military high command, the previous Mexico-based negotiations have failed after being sabotaged by factors unrelated to the domestic situation. As is well known, US interference played a crucial role in sabotaging the negotiations by illegally kidnapping Venezuelan Ambassador Alex Saab, after his unlawful detention in Cape Verde.

Maduro’s decision is linked to the Saturday, March 5, visit by a US delegation to Miraflores Palace, a meeting which has been described as “a respectful, cordial and very diplomatic two hours” on matters of energy, security, and other issues of hemispheric interest.

It is important to emphasize that the Joe Biden government came to Caracas to hold this meeting and not the other way around. This says a lot about the fragility of the US interests in the American continent in the midst of the escalation of coercive measures imposed on the Russian Federation. These measures, although applied on Russia, now threaten with a stagflation that could take its toll politically and, above all, socially in the heart of the United States. Hence the White House’s urgency to open a direct diplomatic channel with Venezuela, bypassing the irrelevant “Guaidó interim government” created by the Donald Trump administration.

The Venezuelan government, in line with its diplomatic approach, has ratified its will to advance towards a common regional agenda “that could propitiate the well-being and peace in our hemisphere.”

To such an end, “we have agreed to work on this agenda with the United States delegation,” stated President Maduro. All this contradicts reports about the US-Venezuela meeting in Western media agencies which have been based on lies and disinformation, as usual.

Assessment of present and future scenarios
The consequences brought about by the economic measures taken by the US and the EU against the Russian Federation represent economic, financial and commercial risks all over the world.

Recession and high inflation (stagflation) scenarios in Western capitalist nations are increasingly imminent, considering the dizzying rise in oil and gas prices and the food crisis that could result from this.

The financial markets, which set the tone for commodity prices, have “begun to break” as a result of the escalation scenario brought about by the NATO’s weapons shipment to Ukraine, the flow of mercenaries and neo-Nazi paramilitaries, and the West’s information and psychological warfare.

The interconnected world in which we live, which is based on complex supply chains under the guise of an international division of labor, is cracking, even more than it already was due to the economic and financial aftermath of the pandemic.

Venezuela is a part of the world oil dynamics and plays an important role in maintaining the West’s energy security, since it is a fundamental member of the Organization of Petroleum Exporting Countries (OPEC) plus Russia (OPEC+).

The dialogue channels in OPEC will be vital for “stabilizing prices in the oil and gas market,” according to President Maduro.

But, if Venezuela is to have greater incisive power in the world oil dynamics, the state-owned PDSVA must recover from all the attacks it has suffered during these past years under due to the sanctions.

Venezuela’s access to international credit is key, a point that has most likely been discussed with the US delegation, if we stick to the president’s words. “I have been saying it for a long time,” he said. “We are prepared to advance in the production 2 or 3 million barrels [per day].”

If the United States government really ends up applying an oil embargo on Russia, and intends to replace its energy imports with Venezuelan oil, the first measures in good faith should consist of lifting the unilateral coercive measures that have undermined relations between Venezuela and the US.

Finally, President Maduro assessed this historical moment from a Venezuelan perspective in the midst of war in the axial nerve of Eurasia, taking a step forward in the conflict scenario. He expressed that “it is time of diplomacy, of words, of truth and of peace so that the situation does not escalate and we all lose.”