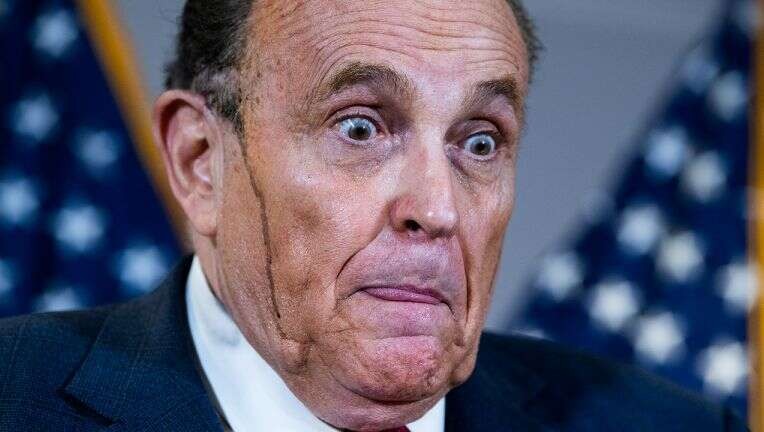 Some US districts used voting machines provided by Canadian-owned Dominion

Donald Trump’s election fraud lawyers – who describe themselves as an “elite strike force team” – have alleged that the vote was hacked and ballots switched from the president to Joe Biden, thanks to technology developed in Venezuela.

Rudy Giuliani, Mr Trump’s personal lawyer, leading the team, said that the election had been rigged by “a company owned by affiliates of Chavez and Maduro”.

They were angered by the use of Dominion, a Canadian-based company.

He was also upset at a Venezuelan firm, Smartmatic, being used – despite them only operating in Los Angeles County.

“You couldn’t possibly believe that the company owning this election machinery was an ally of Hugo Chavez, is an ally of Nicolas Maduro, and an ally of George Soros. What do we have to do to get you to the truth?” said Mr Giuliani.

“This is real. It is not made up. There is no one here who engages in fantasy. I know crimes – I can smell them.”

He said the votes in Michigan were “being counted in Germany, by a Venezuelan company. Owned by people who are allies of Maduro, and Chavez.”

Thousands of social media users have been sharing posts which claim that software from Dominion Voting Systems, a company that supplies election technology, is used in the same six states where Mr Trump is filing lawsuits in connection with the presidential election, suggesting that Dominion Voting is responsible for election fraud.

Dominion Voting systems were used in at least 24 states.

Mr Giuliani’s colleague Sidney Powell, the lawyer who pioneered the theory of a “deep state” of Obama-era officials set to thwart Mr Trump, insisted that Hugo Chavez, who died in March 2013, had approved Smartmatic’s systems.

“We have evidence that this came from Venezuela, from Nicolas Maduro, from Hugo Chavez, from Cuba, and from China which has significant interests in Venezuela.”

She added: “We have no idea how many Democratic officials paid to have the election rigged in their favour. This is a massive, well-coordinated effort. It is the 1775 of our generation and beyond.”

“There should never be another election – I don’t care even for dog catcher – in this country using machines by Dominion and Smartmatic,” she said.

Dominion, based in Toronto, has been majority-owned since 2018 by Staple Street Capital, a New York private equity firm.

Both Dominion and Smartmatic have released statements saying no ownership relationship exists between the two competing firms.

Smartmatic is an international company incorporated in Florida by Venezuelan founders. There is no reason to believe Dominion has ties to Venezuela, nor a partnership with Smartmatic.

While Smartmatic technology has been used in Venezuelan elections, accusations by government opponents that the company rigged elections there are unsubstantiated.

In 2017, the company accused Venezuela’s government of electoral fraud.

Smartmatic purchased the voting machine company Sequoia Voting Systems in 2005 but sold it two years later after objections were raised over its partnership with a company in which Venezuela’s government had invested. Three years later, Dominion acquired Sequoia.

Election security experts say it’s difficult to know for certain whether some Sequoia code may be used in Dominion’s software because of the industry’s limited transparency. Both Dominion and Smartmatic say they do not use each other’s software.

“Dominion has no company ownership relationships with any member of the Pelosi family, the Feinstein family, or the Clinton Global Initiative, Smartmatic, Scytl, or any ties to Venezuela,” Dominion said in a statement on its website.

“Dominion works with all political parties; our customer base and our government outreach practices reflect this nonpartisan approach.”

Smartmatic concurred in its own statement, saying, “Smartmatic has never owned any shares or had any financial stake in Dominion Voting Systems.

“Smartmatic has never provided Dominion Voting Systems with any software, hardware or other technology. The two companies are competitors in the marketplace.”

Smartmatic only provided technology and software to Los Angeles County in the 2020 election, the company told the AP.

Its technology was not used in any battleground states, including Pennsylvania, Georgia, Arizona, Nevada, Michigan or North Carolina.

Dominion has been the target of a number of false claims about the election pushed by Trump supporters, among them that the company switched or deleted votes cast for Mr Trump and that it has ties to prominent Democrats.

There is “no credible evidence” that the 2020 election outcome was altered by exploiting technical vulnerabilities, according to an open letter signed by 59 election security experts and released 16 November.