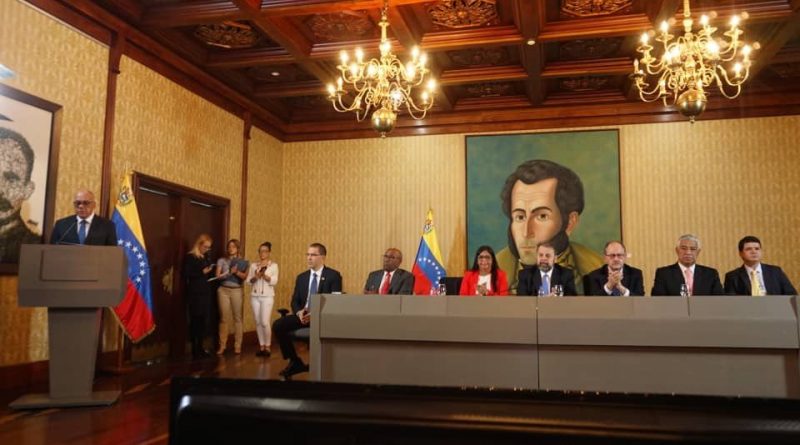 This Monday, a new national dialogue table between the Venezuelan government and members of an opposition group was installed at the headquarters of the Venezuelan Foreign Ministry in Caracas, in order to advance the debate and negotiation of various agreements of interest for the country. Representatives of the Venezuelan government, such as Vice President Delcy Rodríguez, and representatives of opposition sectors such as Timoteo Zambrano, Claudio Fermín, Enrique Ochoa Antich, among others, were present and six important agreements were signed, including the reinstatement of the PSUV and allied parties in the National Assembly (AN), refusal of sanctions, a setup for a new board for the CNE, solution for some cases in detention, defense of the Essequibo Territory, among others.

Jorge Rodríguez, in a statement to the media, said:

“We bring a very concrete message from our President, Nicolás Maduro, next we want all the political, social, economic factors of Venezuela and the world to know our absolute disposition to keep open all the doors for dialogue, for negotiation, for agreement, for peace, and we insist: we have not closed any doors, nor any initiative to resolve among Venezuelans the issues that only concern us Venezuelans,” he said.


He added that both sectors have agreed on a working agenda to continue negotiations.
He also announced that a set of agreements that are detailed below were achieved:

The National Dialogue Board will also continue working on a methodology for agreements, in the following areas:

The parties will continue advancing in agreements on the balance between the constituted powers such as: operation of the National Constituent Assembly, the mechanism of institutional normalization, the conflict between powers and overcoming the contempt [status] of the National Assembly. This agreement will include the electoral processes that must be carried out in a climate of coexistence, of broad electoral guarantees and political and social normality.

An agreement for the application of proportional representation of minorities established in the Constitution of the Bolivarian Republic of Venezuela is discussed.

Agreement for coordinated work between the public sector and private enterprise.

Rodríguez explained that the partial agreements that are under discussion will be discussed in specialized technical tables on each topic in order to improve their content, application, and execution, in addition to adapting them to the Venezuelan Magna Carta.
These tables are initially made up of a delegation from the National Government and a representative of the following political parties: “Movimiento al Socialismo, Avanzada Progresista, Soluciones, Cambiemos”, as well as persons from political, academic, economic and social life.

The opposition undertakes to act with transparency and seriousness

The opposition deputy Timoteo Zambrano said the Venezuelan opposition promised to act with “transparency and seriousness” in the resumption of the negotiation process that began Monday at the headquarters of the Venezuelan Foreign Ministry in Caracas.
“Representatives of the National Government and the opposition have settled intentions, renounced positions to build, unite and add to a solution,” he said.

In addition, the representative of the Venezuelan right asked the countries of the world to value and support the agreements, and the willingness of both delegations to wager on peace and dialogue. In the ceremony several Ambassadors appointed to Caracas, including the Chinese and Cuban Ambassador, were in attendance.
“We have decided to take a step forward to recover the time that due to the ambition of some and the mistakes of all, we have lost for Venezuela,” he said.
For his part, Claudio Fermín, leader of the Solutions for Venezuela party, said that “we are committed to peace, a concerted measure and Venezuelans are not going to allow the country to miss this opportunity for dialogue.”

He stressed that Venezuela “deserves that we seek points of agreement and needs a prompt response to the country’s problems and we will not have it through violence; we are resolved to dialogue for the country”. He said that “the country cannot wait for the next elections to start making decisions that are urgent for the country.”
Fermín said that the commitment of this national dialogue should also include the productive sectors of the country: “We aspire that the reactivation of the productive apparatus be a priority and the sanctions are an antinomy, a stab at the productive system and we reject them, we protest them and we ask you to lift them. ”


He criticized the opposition groupings that met in Norway and Barbados for missing out on the opportunity to offer the country solutions based on dialogue and agreement. “Deputy Juan Guaidó, as we have witnessed, has had an extraordinary opportunity with the dialogues in Norway (…) instead, what does he propose, violence, to cross his arms, or surrender to the will of external factors?” he added.
Fermín stressed that his party and opposition representatives who attended this initiative have as a model peace, not that of violence; that of sovereignty not that of foreign intervention; that of the reactivation of the economy, not that of sanctions”.