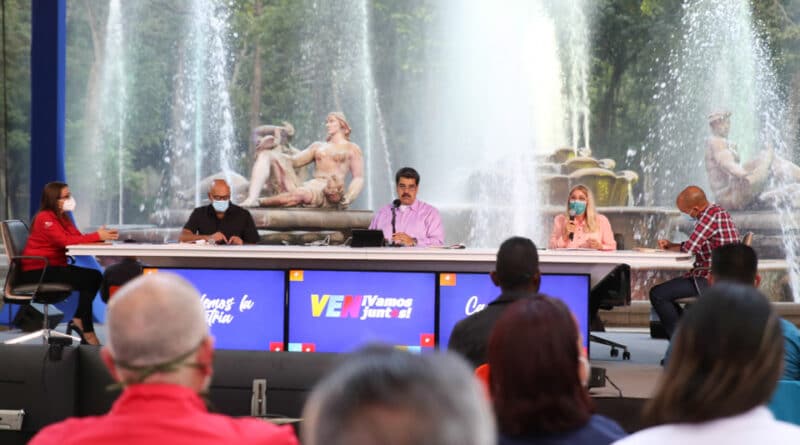 This Thursday the Venezuelan President, Nicolás Maduro, listed the proposed laws that will be in national consultation and that will promote the new National Assembly as of January 5, 2021. The information was presented during a meeting with the candidates of the Gran Polo Patriótico Simón Bolívar (GPP) to the National Assembly, where he advanced the content of the twelve proposals for legal tools to be discussed, debated and approved by the people in the new National Parliament.

Maduro stressed that the new National Assembly must draft, consult and approve the Law of Communal Cities and the Communal Parliament. He recalled that “we have proposed that, by June 24, 2021 (date of the Bicentennial of the Battle of Carabobo) the installation of 200 Communal Cities in Venezuela will begin, with the authority of the Communal Councils and Communes.”

For this purpose, it is required that this Law exist and in this way consolidate the empowerment of Popular Power. “I give you, the candidates of the GPP, this proposal to build this legal instrument together with the people and bases.”

In the same way, he stated that the Law of Communal Parliament must be debated and approved. “It is a reality and there are parliamentarians in the Communes, and this requires a legal framework, and it will be up to the new National Assembly elected on December 6th to consult with thousands and thousands of leaders to implement this Law” said the president in a TV broadcast.

He pointed out that among the objectives is the integration of the functions of the National Assembly with the communal parliamentarians; “in a single vision of the Communal State, the rule of law and justice,” he concluded.

Dialogue processes
Maduro affirmed that he is willing to recognize the new National Assembly (AN) and participate in all dialogue processes that originate from the Legislative Power. “When the National Assembly is installed, it should promote a great national dialogue with all the political parties, all the deputies, the social and economic forces of the country, and they should summon me, I’m willing to attend to and accept all the consensuses that arise from a broad national dialogue, inclusive of all sectors of national life” he stated.

The Head of State assured that the Legislative Power will become the political epicenter of national life, for which he urged Venezuelans to participate in the upcoming elections on December 6.

The dignitary has reiterated on several occasions that in Venezuela all legal, technical and technological guarantees are given so that the process is carried out with transparency.