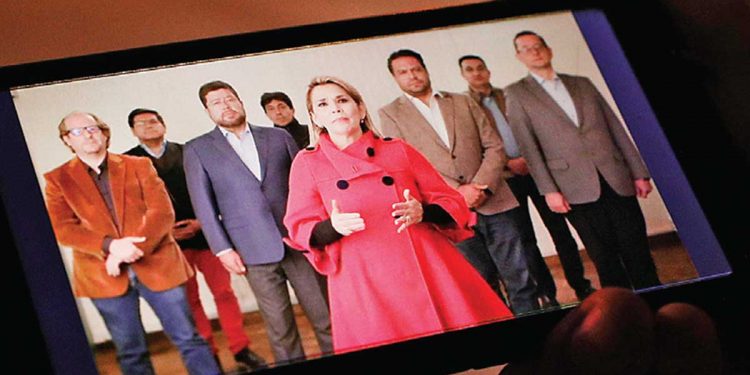 Faced with the victory of the Movement for Socialism (MAS) in the Bolivian elections, the de facto government, chaired by Jeanine Áñez, has requested visas to the United States for its personnel.

NBC journalist Tom Brokaw reported Thursday upon a letter from Áñez in which she has requested 350 visas from the United States government for officials of her interim government.

The report, quoted by the communication platform Latin American Summary, indicates that the reason behind this request is the concern that the Bolivian de facto government was going to be prosecuted by the government of President-elect Luis Arce Catacora.

The news has gone viral on social networks under the hashtag: “Time to escape?”

On Sunday, MAS candidate Luis Arce managed to win in the first round of presidential elections in Bolivia, an election that took place 363 days after the coup d’état orchestrated by the opposition and supported by the US, an event that prompted Evo Morales’ resignation as president of Bolivia.

This victory occurred despite the efforts of the de facto government of Jeanine Áñez, installed after the coup in November 2019, to perpetuate itself in government with measures such as postponing the elections.

Despite her attempts to prevent the return to power of MAS in Bolivia, Áñez has been forced to acknowledge the overwhelming victory of Morales’ party in the elections, thus completing a mandate that has included countless unfulfilled promises, and acts of crime and violence.

Now, after a year, MAS has returns to power with a commitment to solve the serious problems that afflict the Andean nation, especially the economic crisis.