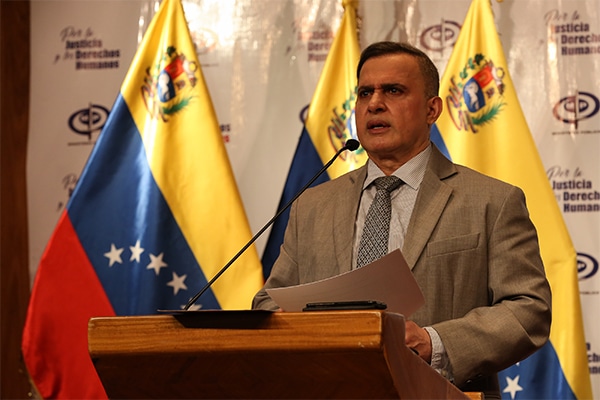 “I want to recall that the Criminal Cassation Chamber of the Supreme Court of Justice (TSJ), on October 9, 2020, decreed the nullity of a past action that the Public Ministry had carried out against Ascanio Antonio Tarascio and Esteban José Zarate Soto, indicating them as allegedly responsible for the death of Captain Rafael Acosta Arévalo ”.

Regarding the case, he explained that the decision of the Supreme Court “retraces the cause to carry out the investigation again, granting a period of thirty days.” In this sense, he reported that in the new hearing the Public Ministry charges the citizens involved with the crimes of Qualified Homicide and Torture, meaning a maximum penalty of thirty years in prison if found guilty.

Rafael Ramón Acosta Arévalo was a corvette captain of the Venezuelan Armed Force (FANB). He died in June 2019 under custody of the General Directorate of Military Counterintelligence (DGCIM) after being detained for “conspiring to carry out an attempted coup d’état.” Acosta Arévalo died as a result of injuries suffered while in detention in a military hospital, creating local and international uproar due to alleged torture.

The Public Prosecutor’s Office charged two officials assigned to the Directorate General of Military Intelligence (DGCIM), and requested their preventive detention as suspects. The officers were initially charged with the crime of “pre-intentional concausal homicide,” which carries a maximum penalty of nine years.

Saab added that the action of the judicial bodies in this case shows that “there is a human right to due process; here the victim (the relatives of Acosta Arevalo) has the opportunity, for example, as in this case, to appeal a decision with which they could not agree. The Venezuelan justice acts there,” said Saab.

Institutional support
Attorney General Saab insisted that if a person or official, from an individual point of view, “violates the Constitution by violating human rights, they will be punished, relentlessly persecuted and the full weight of the law will fall against them.”

UN recognition
Regarding the reactions to the aforementioned case, the Attorney General highlighted the recognition by the Office of the United Nations High Commissioner for Human Rights, Michelle Bachelet, who, through Twitter, stated that: “the accusations of torture against two soldiers for the murder of Captain Acosta Arévalo are steps in the right direction in the fight against torture.”

Support for elections
Similarly, the Attorney General reiterated the absolute support of the Public Ministry for the electoral process of December 6 of this year for the election of new deputies to the National Assembly. In this regard, he explained that the Public Ministry will have 1,104 officials throughout the national territory to protect the rights of voters.