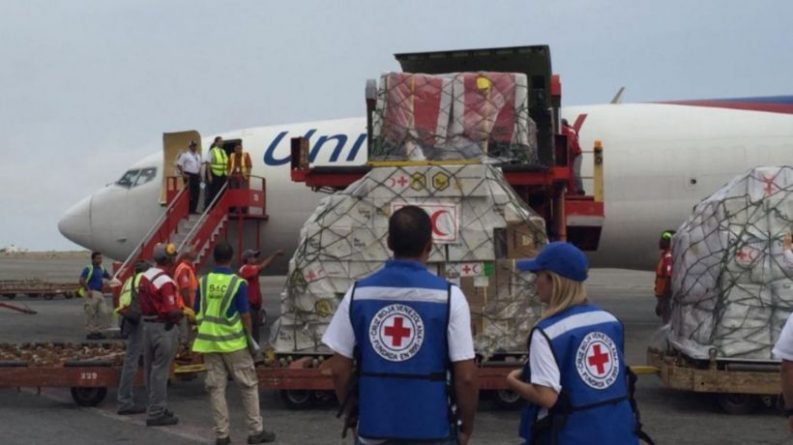 On February 24, the front pages of the world’s newspapers echoed with (news of ) the burning of the “humanitarian aid” that sought to enter by force from Cúcuta. Immediately the Venezuelan government was classified as the one to blame. “The international community, could see, with their own eyes, how the usurper regime violated the Geneva protocol, where it is clearly said that destroying humanitarian aid is a crime against humanity,” said Juan Guaidó the previous day, surrounded by the Colombian president Iván Duque and the Secretary General of the OAS, Luis Almagro.

The same line was repeated by spokesmen like John Bolton or Mike Pompeo, in addition to Senator Marco Rubio, who wounded in his personal pride, presaged that in the future Maduro would be lynched just like the Libyan leader Muammar Gaddafi.

Six days before, the antichavismo in the mouth of Guaidó said that the aid would enter yes or yes in a humanitarian avalanche, mobilized by 600 thousand registered volunteers for this task. Finally, the number of volunteers was much smaller than expected in an operation that The New York Times described as “an attempt by the opposition to undermine President Maduro’s support bases in the delivery of food.”

According to the political scientist Dimitri Pantoulas, that delivery was “99% military and 1% humanitarian in aspect”, and if it failed, the image of the “interim presidency of Guaidó” could be damaged. The result was that no important military soldier complied with the coup call of Guaidó, and the United States had to stop talking about the burned-out trucks when the New York Times published videos showing that they had been burned down by anti-Chavista para-military (with the protection of Colombian authorities).

However, the delivery of humanitarian aid continues to be used as a form of pressure against the Venezuelan State to influence its internal affairs. In this context, the issue was one of the most named by the coalition of Latin American and European countries led by the United States at the last session of the UN Security Council.

THE RED CROSS, THE GOVERNMENT OF VENEZUELA AND THE FIRST DELIVERY
Ten days before February 23, the vice president of Venezuela, Delcy Rodríguez, met with authorities of the Red Cross to “review cooperation mechanisms aimed at strengthening the Venezuelan health system”, after agreements were signed in 2018 with this organization and the Pan American Health Organization with the aim of avoiding the US financial blockade to buy medicines and supplies.

At the beginning of February, the Red Cross had been clear in its decision not to participate in the delivery of humanitarian aid from the United States to nearly 40,000 people, or 0.13% of the Venezuelan population . “We will not do it because it violates the principles of neutrality, independence and non – interference in the internal affairs of a sovereign state”, remarked the organization who asked in the same tone that such delivery be made in accordance with the Venezuelan government.

So it was that after the delivery of food and medicine by China, Russia and PAHO, the Red Cross announced in mid-March that in April it would bring to Venezuela supplies, medicines and food for 650 thousand people. For his part, President Nicolás Maduro reported on an agreement between the Red Cross and the Bolivarian government to “work with the UN agencies with the aim of bringing to Venezuela all the humanitarian aid that may be brought.”

Last Tuesday, the first shipment of the organization arrived at the Maiquetía International Airport, located in the coastal state of Vargas. During its delivery, the Minister of Health, Carlos Alvarado, explained that 24 tons of supplies, medicines and 14 power generators were received, among other elements, which will be distributed, one half to the eight Red Cross hospitals and the other half to hospitals of the public health service.

“We ask that this great achievement not be politicized,” said the Venezuelan representative of the Red Cross, Mario Villarroel, during the unloading of the plane. It is expected that more shipments of this type will arrive in Venezuela for a period of two years, according to the authorities.

DAMAGE CONTROL, APPROPRIATION AND ISOLATION OF THE VENEZUELAN OPPOSITION
One of the main promoters of the humanitarian channel in Venezuela, Francisco Valencia of the NGO Codevida, said that the delivery “alleviates suffering, but does not completely solve the humanitarian emergency.” According to this thesis, in Venezuela it is necessary to attend to seven million people according to the figures of the Secretary of Humanitarian Affairs of the UN, who elaborated this number without consulting with official (Venezuelan) agencies.

Although Valencia asked not to politicize this delivery, quickly, Juan Guaidó said that the delivery of “humanitarian aid” is an achievement of the struggle of the Venezuelan opposition. In this sense, he asked his followers to control the delivery so that it is not used as “a political blackmail”. In this way, he avoided referring to the fact that if he had not tried to force trucks into Venezuela, in an operation directed by a foreign force, the arrival of these shipments would have been coordinated well in advance between the National Assembly and Maduro;s government.

While Elliott Abrams, who led the failed operation of Cucutá on February 23, warned: “that help is not going to solve the problems that Venezuelans face, the kind of help that is needed for a general recovery is to replace the regime.” The statement, while high-sounding, on the other hand can not hide that the Venezuelan government has undermined the humanitarian narrative as a way of crashing doors into the country.

Guaidó’s intention to treat the arrival of the cargo as an achievement, in addition, reveals how he intends to attribute it to his “interim presidency”. That instead of strengthening his narrative, it contributes to broaden the perception that Guaidó has completely lost the initiative in the local scene in the face of the Venezuelan government

In that sense, the political fact that the self-proclaimed celebrates is that Nicolás Maduro found a new way to alleviate the blockade of medicines and supplies suffered by Venezuela. The blockade that Guaidó asked for, and that put him in the headlines weeks ago.