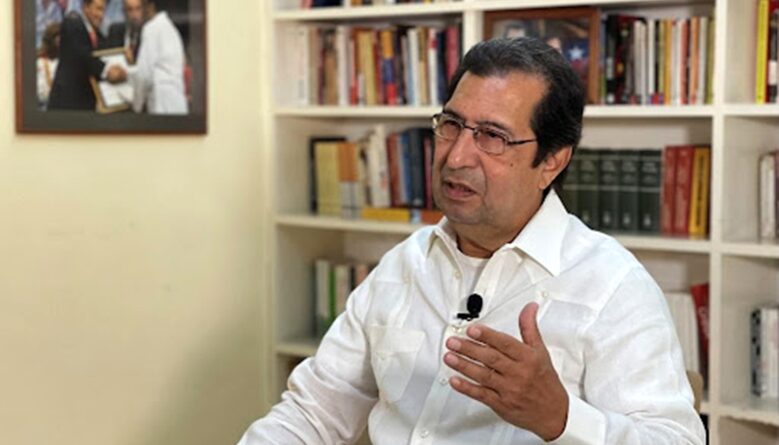 At the conclusion of the Bicentennial Congress of the Peoples of the World, held in Caracas, journalist Geraldina Colotti interviewed Professor Adán Chávez, historic leader of the Bolivarian Revolution, Venezuelan Ambassador to Cuba.

GC: The Bicentennial Congress of the Peoples of the World has just ended in Caracas, what is the balance and what are the perspectives to continue with this important internationalist political work?

AC: From June 21 to 24 of this year, the Bicentennial Congress of the Peoples of the World was held in Caracas; a space of articulation to which comrade President Nicolás Maduro has summoned us in the framework of the 200th anniversary of the glorious Battle of Carabobo, a battle that continues to motivate us today to defend the dignity, sovereignty and independence of our Peoples; and in which the patriot army under the command of Simón Bolívar endorsed the defeat of the Spanish empire in national territory, allowing the Liberator Father to concentrate his efforts in the liberation of the nations of the South.

Inspired by this heroic deed, 380 international delegates, representatives of political, social, workers’, youth and students’ organizations, parliamentarians and parliamentarians met in our homeland to deepen their unity and reaffirm their commitment to the defense of the legacy of the historic leader of the Bolivarian Revolution.

This, despite the fact that they have tried everything: oil and parliamentary sabotage, violent street actions (guarimbas), assassination attempts, paramilitary incursions led by former US Marines and even a military invasion disguised as “humanitarian aid”; and, recently, the attempt to generate new violent acts supported by the actions of criminal gangs and Colombian mercenaries.

The fact is that what happened in Cota 905 is not an isolated event, but rather an expression of the Continuous Coup Plan that has been implemented against Venezuela throughout these years, with the complicity and financing of the government of the United States and its lackeys, among which stands out the narco-government that, to the regret of the Colombian sisters and brothers, governs that country.

The first results of the investigations carried out by the competent authorities of the country, show the connection of political actors of the Venezuelan anti-democratic opposition with these events and have exposed the conspiratorial trafficking to which, once again, violent sectors of the right wing are appealing.

They have not been able to, nor will they be able to. Although the conspiracies, mercenary incursions and other terrorist actions have not ceased, Venezuelan women and men remain firm in the defense of the legacy of Commander Hugo Chávez. The Venezuela of the year 2021 advances, with the participation and protagonism of the people, in its socialist construction; until reaching, sooner rather than later, the point of no return.

GC: Venezuela’s response to the imperial onslaught is the deepening of the Bolivarian Democracy, with mega-elections scheduled to take place in the country this year. How are the revolutionary forces preparing for the November 21 elections?

AC: The current political situation of the country is different from that of a few years ago; an aspect to which the National Dialogue called by comrade President Nicolás Maduro, between the patriotic and revolutionary forces and the constitutionalist opposition, has contributed in a good way.

As a result of the conversations that have taken place within the framework of said process, transcendental agreements were reached, related to the rejection of the military intervention and the economic, financial and commercial blockade imposed on the country; as well as the ratification of the peaceful and democratic way as the only way to resolve our differences, and the commitment to the defense of our Essequibo Territory.

Also, the appointment of new authorities of the National Electoral Council (CNE) was agreed upon, which has called for mega-elections for November 21 of this year; in order to renew the executive and legislative authorities of the 24 federal entities of the country and the 335 municipalities, as foreseen in the Venezuelan legal system.

In view of this scenario, the National Directorate of the United Socialist Party of Venezuela (PSUV) has decided, at the proposal of our President, to carry out an internal process for the selection of the candidates of the revolutionary forces; a process that began last June 27, and in which the bases of the Party nominated their pre-candidates for the primaries to be held on August 8.

Undoubtedly, this is a very significant demonstration of internal democracy that the Party of Chávez is providing, which must continue to increasingly become, together with the People and the other organizations that make up the Great Simon Bolivar Patriotic Pole, the engine to build, with the protagonist participation of our people, the concrete socialism of which the historic leader of the Bolivarian Revolution spoke of, until we reach the point of no return previously mentioned.

This is a task of great proportions, which we, the militants of the Party, have decided to assume in a courageous manner, without letting ourselves be blackmailed or intimidated; with full awareness and loyalty to our process of socialist construction and to the legacy of Commander Chávez, as we, the Chavistas, must always do, overcoming the difficulties that may arise; difficulties that in no way detract from the important progress that this internal process implies for the strengthening of the Party of the Revolution.

GC: Let’s talk about Cuba, are we in the presence of a new offensive against that country, what is really happening in Cuba, what is your point of view?

AC: In the sister Republic of Cuba, small local protests took place recently, developed and financed with the complicity of the government of the United States; events in which some acts of vandalism took place, which undoubtedly are part of the agenda of internal destabilization that US imperialism is permanently promoting in an attempt to undermine the project of sovereignty and independence embodied by the Cuban Revolution.

It is an agenda that is being deepened in the midst of the complex situation that the Homeland of Martí and Fidel is going through, as a consequence of the impacts generated by the terrible pandemic of Covid-19 and the viciousness with which imperialism is acting against this brother People, by intensifying the criminal and illegal economic, financial and commercial blockade to which it is subjected.

This conspiratorial action has been accompanied by an increase during the last few weeks of a brutal campaign against Cuba in the social networks; aimed at generating some opinion matrixes through which they seek to create dissatisfaction and encourage protests related to some dissatisfactions that the people may validly have.

Therefore, as recently expressed by our fellow Foreign Minister Bruno Rodriguez, what happened in Cuba has to do with a clear political operation, designed in the United States and massified in the social networks, as part of the unconventional war actions that US imperialism has been waging against this brother People for more than 60 years; just as it has been doing with Venezuela.

Personally, I have no doubt that both Cuba and Venezuela will continue to victoriously confront this imperial attempt, demonstrating that lies and manipulation will never be able to defeat the truth of our Peoples, who organized, conscious and mobilized will continue to firmly defend the legacy of Commanders Fidel and Chávez.

GC: How is the Hugo Chávez Institute preparing to celebrate the 67th anniversary of the birth of the Bolivarian leader?

AC: The 67th birthday of Commander Chávez takes place, for the second consecutive year, in the midst of a complex conjuncture, characterized among other things by the deepening of the imperial onslaught of which we have spoken before; and by the battle we continue waging as humanity against the terrible pandemic of Covid-19.

In this scenario, we have organized from the Instituto de Altos Estudios del Pensamiento del Comandante Eterno Hugo Rafael Chávez Frías an important number of activities to celebrate such a special date for Venezuelans; in compliance with the purpose for which the Institution was created, which is none other than the preservation and dissemination of the legacy of the historic leader of the Bolivarian Revolution.

Said activities include the beginning of the General Vision of the Legacy of Commander Hugo Chávez; a diploma course that will be given virtually to the Secretaries of the Sectorial and Territorial Vice Presidencies of the United Socialist Party of Venezuela (PSUV), on a platform designed for the development of the Institute’s training programs.

Likewise, the second literary contest El Bicentenario de la Batalla de Carabobo en el Pensamiento del Comandante Chávez (The Bicentennial of the Battle of Carabobo in the Thought of Commander Chávez) will be announced; this contest will be developed under the essay modality and in which persons over 16 years of age from any part of the world may participate, presenting an unpublished work, not awarded in other contests and written in Spanish.

Also, the corresponding arrangements are being made for the printing of three texts. The first one, entitled Hugo Chávez y la Venezuela Potencia, is an anthology that gathers the fundamental ideas of our Eternal Commander in relation to the economic thought for national development.

Furthermore, the books El Joven Chávez (The Young Chávez), a work written by comrade Germán Sánchez Otero, which deals with the Bolivarian leader’s childhood and youth, and, together with the publishing house Vadell Hermanos Editores, the reprinting of the text Mi Primera Vida (My First Life), by comrade Ignacio Ramonet, which allows us to know first hand the forge of Comandante Chávez, are ready to be printed.

Additionally, the deployment of micros related to the life and work of Comandante Chávez in the social networks, sent by the country’s cultural leaders, micros through which they acknowledge the work of the Bolivarian Revolution in favor of the strengthening of Our American and national identity, giving back to the people and, beyond, to the humble of Latin America, the Caribbean and the world, reasons to fight tirelessly for dignity, sovereignty and independence, is also envisaged.

On the other hand, from the Eternal Commander Hugo Chávez Foundation, directed by Rosa Virginia Chávez, another important group of activities will be developed, some of them jointly, as part of the extraordinary work that this Foundation consistently develops in favor of the defense of the legacy of the historical leader of the Bolivarian Revolution.

Featured image: Adan Chávez, Venezuelan ambassador to Cuba, speaks on continuous coup attempts on the part of the US against Venezuela and Cuba. File photo.