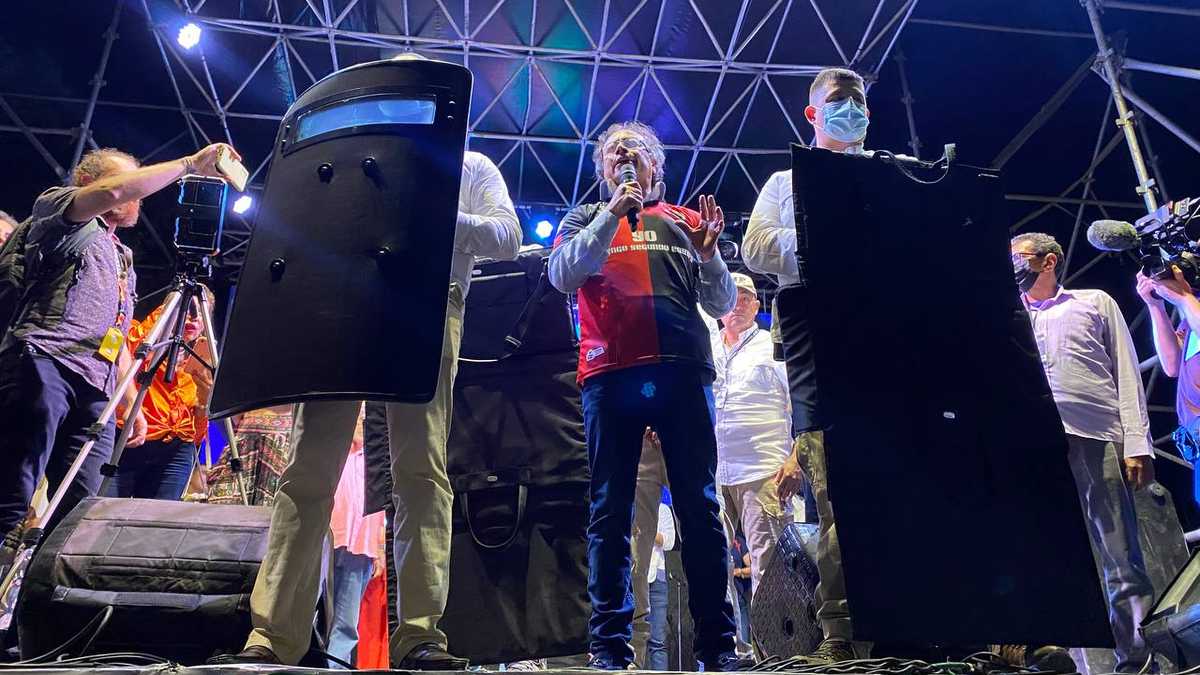 Gustavo Petro speaking in Cúcuta, accompanied by a security group with shields, on Friday, May 6, 2022. Photo: Gustavo Petro Press.

The Historic Pact candidate led a campaign rally in the city of Cúcuta, on the border with Venezuela.

Gustavo Petro, the candidate for the presidency of Colombia for the leftist coalition Historic Pact, announced on Friday, May 6, that he will resume diplomatic relations with Venezuela if he wins the elections.

Petro made this comment during an electoral event in the city of Cúcuta, on the Colombia-Venezuela border. The candidate had initially canceled the event after receiving death threats from a paramilitary group, but was later able to resume his campaign with reinforced security.

Petro, wearing a bulletproof vest, and surrounded by a group of police officers with shields, said to a crowd of supporters, “Cúcuta cannot be a city, it cannot prosper, it cannot overcome problems without opening the borders. The resumption of normal diplomatic relations [with Venezuela] is a difficult issue, controversial, even. On a global scale, debatable, undoubtedly, but I do not see any alternative for Cúcuta except full reestablishment of diplomatic and consular relations between the two countries.”

Bilateral ties between Colombia and Venezuela have been suspended since February 2019, a month after President Iván Duque of Colombia called on the international community to establish a “diplomatic fence” to force the resignation of Venezuelan President Nicolás Maduro.

Caracas then announced the rupture of “all diplomatic and political relations” with Bogotá, while Duque showed strong support for the self-proclamation of Juan Guaidó as “interim president” of Venezuela following Washington’s strategy.

Meanwhile, the long border that separates the two countries has been closed and reopened several times since 2015. In 2015, President Maduro announced the closing of the border after an armed confrontation between Colombian smugglers and Venezuelan military personnel, three of whom were injured.

On April 19 this year, the government of Venezuela denounced the vandalization and burning of its consulate in Bogotá, the Colombian capital, and accused the government of Iván Duque of incurring, “by action or omission,” in a “flagrant and repeated violation of the essential norms” of diplomatic and consular relations.

Gustavo Petro leads all the opinion polls for the presidential elections in Colombia, scheduled to take place on May 29.