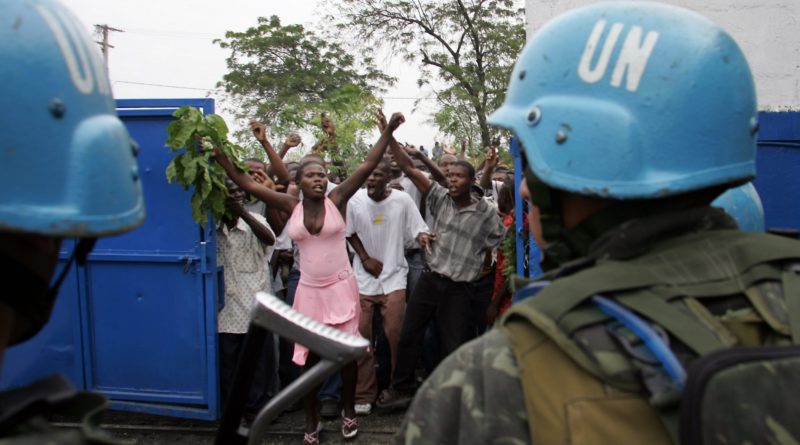 After 15 years of military and humanitarian operations in Haiti, the United Nations “peacekeeping” mission ended in October. In their own words, UN “peacekeepers” reestablished law and order after the country’s violent 2004 coup and helped with relief and reconstruction efforts after the devastating 2010 earthquake.

From 2004 to 2017, the Brazil-led UN Stabilization Mission in Haiti (MINUSTAH) spent $7.5 billion on various operations, such as training a new police force, leading violence reduction projects, and organizing elections.

However, despite the vast sums of money spent, the various UN missions in Haiti can only be qualified as disastrous.

Over the past 15 years, MINUSTAH-led anti-crime operations led to the deaths of many civilians; a fact often brushed off as “collateral damage.” These operations did not stabilize Haiti. Instead, armed gangs are now terrorizing the entire country. The gang members are often allied to politicians and allies of current President Jovenel Moïse.

RELATED CONTENT: UN-Haiti Sex Scandal “They Put a Few Coins in Your Hands to Drop a Baby in You”

The MINUSTAH-trained Haitian police forces have, for the past two years, committed many extra-judicial killings and repressed protesters. The recent death of Charlot Jeudy, a prominent LGBTQ rights advocate, and many other activists indicate that Haiti’s democracy is under attack.

In brief, the UN peacekeeping mission spectacularly failed, and in many regards, made a bad situation worse. Nine months after the 2010 earthquake, Nepalese UN “peacekeepers” allowed raw sewage from their camp to spill into one of Haiti’s most important rivers. This triggered a cholera epidemic that quickly spread to all of Haiti’s regions and beyond.

The outbreak affected more than 800,000 Haitians and killed over 9,000 people in less than a decade. It took the UN six years to acknowledge its wrongdoing. They offered very little to halt the epidemic or compensate victims. Furthermore, UN “peacekeepers” involved in horrific scandals, such as the gang rape of a child, will not be held accountable. Impunity is not a privilege only UN workers enjoy; the UN-supported Haitian governments also face no consequences for their criminal activities.

Since 2018, Haiti has faced fuel shortages, massive inflation, corruption scandals, and political instability. For almost two years, the government and congress have been unable to pass a budget, which leaves the state unable to receive international loans and operate normally.

The humanitarian situation is dire throughout the country, with barely functioning hospitals and food and water shortages in the provinces. Moreover, President Moïse and his political allies have stolen billions of dollars meant for social development and reconstruction after the 2010 earthquake.

Not surprisingly, these elements have triggered many mass protests over the past 18 months. As Haitian American scholar Léonie Hermantin testified to the U.S. Congress earlier this month, Haitians and the Haitian diaspora are speaking in unity on several fronts.

Haitians want to know how billions of dollars in Venezuelan aid meant to improve Haitians’ lives after the 2010 earthquake disappeared. They want foreign interventions – such as the UN “peacekeeping” missions, economic tutelage of the IMF, and American support for corrupt officials – to stop. The nation is weary of ill-conceived and forceful intrusions in their domestic affairs. And lastly, the vast majority of the population, across social classes, wants the departure of President Moïse.

While Haiti’s situation might seem to be calming down, the government’s illegitimate, arbitrary, and repressive actions are increasing. If protests seem scattered, it is not because people have listened to the call for dialogue, but because the government is quelling the demonstrations.

The climate of terror imposed by the national police and gang members who work for politicians is forcing protesters to find new tactics. Their fight against corruption and the deterioration of their living conditions is far from over.

With the present dire situation, there are luckily also some bright spots on the horizon. During 18 months of turmoil, young Haitians have created new political organizations and participated actively in debates and peaceful protests that foreshadow a democratic renewal.

Moreover, the publication of extremely well-documented reports by Haiti’s Superior Court of Auditors and Administrative Disputes on the embezzlements of funds prove that, at the state level, there are upstanding and highly competent individuals. These officials could shape the country’s future and fight corruption.

Many Haitians are demanding the judicial accountability of officials involved in corruption scandals that thwarted investments in education, health, and agricultural reform. The recent mass protests are not spontaneous and chaotic movements but well-organized peaceful marches, where demonstrators link international tutelage to domestic economic failures and corruption.

In the short term, the United States government should make clear that it does not support the government of Jovenel Moïse and should allow Haitians to elect a new leader. The U.S. Embassy’s repeated calls for dialogue cannot heal the divides between a population on the brink of economic collapse and an administration that is increasingly resembling a dictatorship.

Haitians should be allowed to rule over their own country.